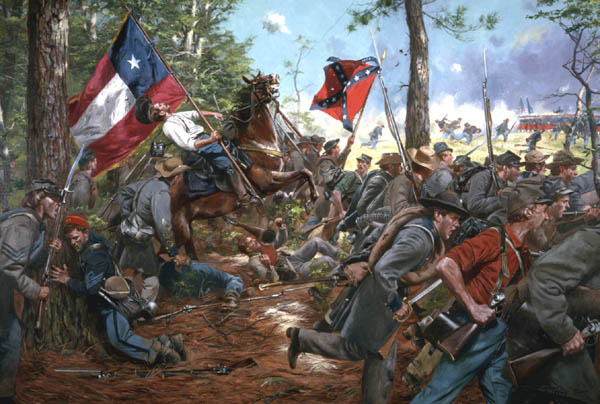 To win Southern independence, the Confederates first had to liberate Northern Virginia, which was occupied by Federal General John Pope. The blustery Pope bragged that his headquarters would be in the saddle where, Confederates joked, most people kept their hindquarters. He had 50,000 men sitting on Northern Virginia’s railway lines. Worse, in Lee’s opinion, was Pope’s declaration that his army would live off Southern civilians. All Southern male civilians in territory occupied by Pope were subject to immediate arrest; only those who could prove their loyalty to the Union would be paid for confiscated goods; and any Southerner— male or female—who tried to communicate with a son or a husband in the Confederate army could, by Pope’s orders, be executed as a spy or a traitor.

One can say, as Northern sympathizers routinely do, that restoring the Union required just such measures of total war—and perhaps it did. But that doesn’t answer the question of why restoring the Union—if this was the only way of restoring it—was such a morally commendable act.

For Southerners like Lee, the example of uncivilized warfare offered by “the miscreant Pope” had to be “suppressed.”  It was a type of warfare that Confederates were beginning to identify with Union occupation—and it justified and underscored all their antebellum complaints about Yankee officiousness, arrogance, and a moral imperiousness that amounted to self-righteous immorality. For instance, in May 1862, Federal General Benjamin Butler, in charge of the Union occupation forces of New Orleans, issued his notorious General Order No. 28, which specified that any Southern belle caught treating a Yankee soldier with contempt would be treated as a prostitute. This earned him the epithet of “Beast” Butler. (He was also known as “Spoons” Butler because—in another common complaint about Yankees occupying Southern homes— he allegedly had a habit of making off with the silverware.)

Butler was too far from Lee’s reach, but Pope was a blackguard who could be taught Southern manners. Most men in Lee’s position would have been cautious. General McClellan was still not far away, at Harrison’s Landing, and he outnumbered Lee even more than he had before the Seven Days. Pope’s numbers were also greater than Lee’s. Yet Lee daringly divided his forces, confident that McClellan would remain in his position on the James River until ordered to leave by Lincoln’s new general in chief, Henry “Old Brains” Halleck.

Lee ordered Jackson to put his troopers between Pope and the Federal capital, a maneuver that was sure to bring the Union commander to battle. Jackson had already clashed with a portion of Pope’s force at Cedar Mountain (9 August 1862), where he had rallied his men by waving his sword in one hand and the battle flag in the other while under heavy enemy fire. Now Jackson maneuvered his army behind Pope’s and further annoyed the Union general by burning his supply depot at Manassas Junction. Confederate cavalry commander J. E. B. Stuart offered his own insult by raiding Pope’s camp and making off with Pope’s dress coat.

Pope mistakenly thought he had “bagged” the slippery Jackson. “I see no possibility of his escape,” said Pope. But while Jackson held Pope’s attention, Lee and General Longstreet rode up to the rescue. Jackson tenaciously defended his position in what became the battle of Second Manassas (Second Battle of Bull Run). Two of Jackson’s best commanders (General William Taliaferro and General Richard Ewell) went down with wounds; some of his men, their ammunition expended, were reduced to swinging their muskets as clubs, desperately hurling stones, and lunging with bayonets; but Jackson held on.

When Longstreet arrived on the flank, he waited for just the right moment to strike. He kept his full complement of troops drawn up and made a careful survey of the land, unhurried by the obvious pressure on Jackson or by Lee’s repeated suggestions that he expedite his assault. Finally, Longstreet smashed the exposed Union line with an artillery barrage that lifted the pressure on Jackson. Then, at Lee’s command, Longstreet sent his troops charging into the Federals, rolling the bluecoats up, while Jackson’s own troopers jumped over their defensive positions, screaming the rebel yell. Under attack from two sides, Pope’s army broke into flight—running all the way to Washington, where it met McClellan’s tardy relief force.

Jackson’s and Longstreet’s combined corps totaled 55,000 men; they had defeated 75,000 Federals (about 63,000 of whom had been engaged); and in the words of a Union army historian, Pope “had been kicked, cuffed, hustled about, knocked down, run over, and trodden upon as rarely happens in the history of war. His communications had been cut; his headquarters pillaged; a corps had marched into his rear, and had encamped at its ease upon the railroad by which he received his supplies; he had been beaten and foiled in every attempt he had made to ‘bag’ those defiant intruders; and, in the end, he was glad to find refuge in the intrenchments of Washington, whence he had sallied forth, six weeks before, breathing out threatenings and slaughter.”

If First Manassas had given the Federals a shock, Second Manassas (second battle of bull run) was worse, because it showed the Confederacy had real staying power. More than that, at least in the Eastern theatre, the Federal army had been dramatically outfought and outgeneraled. In the three months since Robert E. Lee had held field command, he had broken the imminent siege of Richmond, ended the Confederate retreat, and driven two Union armies—Pope’s and McClellan’s—across the Potomac. It was the Federal capital that now feared a siege, that was preparing to evacuate government property to New York, and that was readying clerks for the defense of the city.

Lee’s success had liberated not only most of Virginia, but also, indirectly, the North Carolina coastline. In the Old Dominion itself, western Virginia was now under only tenuous Federal occupation, and in the words of Lee’s Pulitzer Prize-winning biographer Douglas Southall Freeman, except “for the troops at Norfolk and at Fort Monroe, the only Federals closer than 100 miles to Richmond were prisoners of war and men busily preparing to retreat from the base at Aquia Creek.”