Sinking of the Lusitania

History » World War One » Sinking of the Lusitania 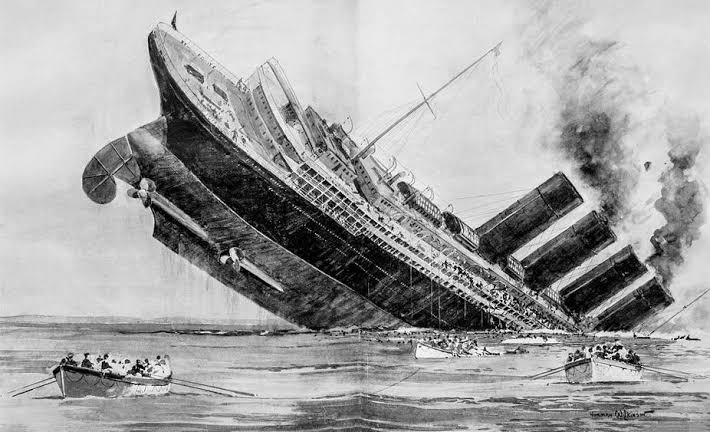 The sinking of the Lusitania on Friday, May 7, 1915 during the First World War, as Germany waged submarine warfare against the United Kingdom which had implemented a naval blockade of Germany.

The sinking of the Lusitania: The Sussex pledge

After the Lusitania disaster, the German government had privately decided to abandon the practice of firing upon passenger liners. But in March 1916, acting against orders, a German submarine fired without warning upon the French steamer Sussex, killing about eighty people. Four of the twenty-five Americans aboard were injured. The ship had not possessed the usual markings that indicated a passenger ship; it was painted black, and its bridge looked like that of a warship. When the German captain spied it traveling outside the routes that the British Admiralty had designated for passenger ships, he suspected it was The Germans had made a mistake, and would certainly have made reparation for the disaster. Wilson, however, took the opportunity to issue an ultimatum to Germany demanding that unless she abandoned submarine warfare entirely, the United States would sever diplomatic relations with her. The result was the Sussex pledge of May 1916, in which the German government made a major concession to Wilson. Although they would not abandon submarine warfare altogether, the Germans would not sink enemy merchant ships, armed or unarmed, without warning and without saving the lives of the people aboard, unless the ship in question opened fire or attempted to flee. This was an enormous concession, since the Germans, in effect, granted enemy merchant ships the opportunity to fire the first shot.

The pledge, however, was conditional. The German government expected Wilson to put pressure on the British government to abandon its hunger blockade and to allow food to make its way to Germany. Should the American government not achieve such a concession from the British, the German government would have complete freedom of action. Not surprisingly, Wilson accepted the concession and refused the condition. Since America’s neutral rights were absolute and inalienable, they were to be enjoyed regardless of the behavior of another belligerent. Wilson thus felt free to continue his policy, which he insisted on calling “neutrality,” of holding one belligerent strictly accountable for its violations of international law but doing next to nothing about those of another belligerent.

As the months passed following the Lusitania disaster, Wilson kept up the diplomatic pressure on the German government to a degree that alarmed some congressmen and other prominent Americans.

Senator Wesley Jones of Washington implored the president “to be careful, to proceed slowly, to make no harsh or arbitrary demands, to keep in view the rights of 99,999,000 people at home rather than of the 1,000 reckless, inconsiderate and unpatriotic citizens who insist on going abroad in belligerent ships.” Senator Robert La Follette of Wisconsin spoke of the wisdom of Wilson’s Mexico policy as compared with the president’s policy regarding American sea travel into the European war zone. The policy of warning Americans that they traveled to Mexico at their own risk was, he said, “a small sacrifice on the part of the few to preserve the peace of the nation. But how much less sacrifice it requires for our citizens to refrain from travel on armed belligerent ships.”