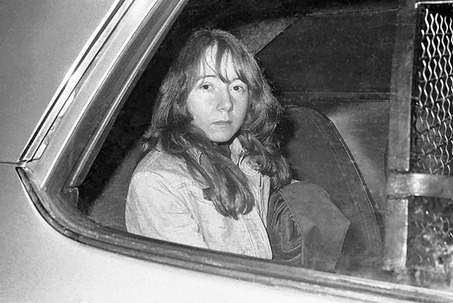 The following article on Squeaky Fromme is an excerpt from Mel Ayton’s Hunting the President: Threats, Plots, and Assassination Attempts—From FDR to Obama. It is available for order now from Amazon and Barnes & Noble.

In March 1976, Lynette “Squeaky” Fromme, a “disciple” of hippie leader Charles Manson, left her apartment in Sacramento concealing a pistol under her red dress. Her mission was to assassinate President Ford.

Charles Manson was a cult leader who had masterminded two brutal Hollywood home invasions that left seven people dead. Squeaky Fromme had met Charles Manson on the boardwalk in Venice Beach in 1967, the year she graduated from high school. Estranged from her family, Fromme was invited to join Manson’s growing “family” of young women who were devoted to him and saw him as a charismatic “messiah-like” figure. He affectionately called Fromme “Squeaky” for her high-pitched voice.

When Manson was sent to San Quentin Prison after being found guilty of murder, Squeaky Fromme made veiled threats against the judge’s children and blamed political leaders for Manson’s guilty verdict. The “Family” was especially angered at President Nixon, who proclaimed Manson “guilty” even before the trial ended.

Fromme said Manson had told his followers that he was mad at Nixon. Ford was just another Nixon, she insisted.

Squeaky Fromme had a long criminal record but had been convicted only on minor charges. On the morning of Ford’s visit, Fromme decided she would kill him. “Maybe I’ll take the gun,” she said to herself, “I have to do this. This is the time.”

Around 10:00 a.m. on the morning of September 5, 1975, Fromme joined a group of spectators lining the route that President Ford would take from his Sacramento hotel to the state capitol building. He was due to meet Governor Jerry Brown then give a speech on crime and gun control to a joint session of the California legislature. Ford’s motorcade was waiting, but as it was a beautiful day, he decided to walk to the capitol. After recognizing the cheers of a small crowd outside the hotel, he headed into the park area and began shaking hands with people lining the walkway.

These types of impromptu interactions by the president always create “a lot of tension in the agents,” Agent Larry Buendorff said, “because we’re not going into an environment that is not controlled. We don’t like to do that. Yet the media, they’re running with their cameras. They’re trying to watch the president, watch the crowd. People start shaking hands and, you know, sometimes they hold on too long and so you’re very busy trying to keep the crowd away. There’s so much going on.”

As Ford walked through the park, he “noticed a lady in a very vivid red dress sort of walking with me as I was walking towards the capitol and all of a sudden I went to shake hands. . . .” It was Squeaky Fromme, and she was about to reach for her .45 caliber automatic gun. Fromme said the president “had his hands out and was waving . . . and [he] looked like cardboard to me.” As she pointed the gun at Ford’s stomach, she said, “The country is in a mess. This man is not your president.”19 Ford recoiled, put his hand up, and hunched over. He looked “alarmed, frightened,” a bystander said.

When twenty-seven-year-old Linda Worlow saw the pistol in Squeaky Fromme’s hand, she “fell to the ground,” which alerted Ford’s agents. Agent Larry Buendorff saw a “hand coming up with a gun.” He stepped in front of the president as Fromme was “pulling back on the slide [of the gun].” He hit the gun and “stopped the slide” then pulled the gun away up to his chest. Buendorff managed to get his thumb between the hammer of the .45 and the firing pin. “She’s screaming. I’ve got the gun and I’ve got her and I’m not letting go so I just pushed her away from the president,” he said. “The president’s going in one direction, I’m going the other direction and she tries to run and I pulled her back. She goes down on the ground and I pull out my cuffs. I cuffed her and yelled out to [an] agent. The agents covered her and they were gone.” As Fromme was led away by agents, she shouted, “Easy guys, don’t batter me. The gun didn’t go off . . . it didn’t go off . . . can you believe it? It didn’t go off.”

Squeaky Fromme tried to kill Ford because, she told reporters after her arrest, “If Nixon’s reality wearing a new Ford face continues to run the country against the law our homes will be bloodier than the Tate-LaBianca houses and My Lai put together. [Manson] wrote to us and said he was mad at Nixon and we should explain why. The Manson family has been locked up for five years for Nixon’s conspiracy. The whole country was and still is dying in Nixon’s thoughts. He walks loose after he dealt people’s blood, lied and ruined the economy and sold us out.”

When Manson prosecutor Vincent Bugliosi heard about the assassination attempt, he wasn’t surprised. Fromme’s actions, he said, were “completely within [the Family’s] life-style—to kill or attempt to kill people and in such a way as to shock the world. I’m not surprised. Not surprised at all.”

At her trial, Squeaky Fromme’s claim that she had no intention of killing Ford but simply wanted to publicize Manson’s plight was rejected by the jury, which found her guilty of attempted murder. When Fromme heard the verdict, she threw herself on the floor and shouted, “You animals!” Fromme was sentenced to life in prison.

Fromme said it never occurred to her that she could wind up in prison, and when asked whether she had any regrets about the assassination attempt, Fromme said, “No. No, I don’t. I feel it was fate.”

This article on Squeaky Fromme  is from Mel Ayton’s Hunting the President: Threats, Plots, and Assassination Attempts—From FDR to Obama.. Please use this data for any reference citations. To order this book, please visit its online sales page at Amazon or Barnes & Noble.