The German Navy in World War 2 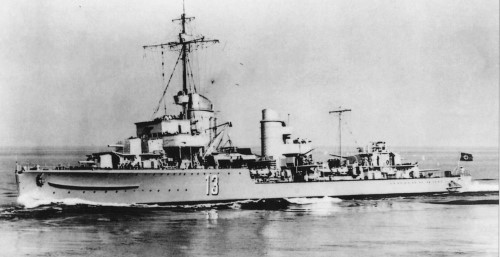 The following article is an excerpt from The Hunt for Hitler’s Warship © 2015 by Patrick Bishop. It is available now from Amazon or Barnes & Noble.

In the 1920s and early 1930s, the head of the modern German fleet, Admiral Erich Raeder kept his distance from Hitler until he came to power. His first impression of him was favorable. Hitler seemed to him “an outstanding personality with a real claim to leadership. He had gained the Führer’s confidence and, once the strategic decisions had been taken, had been given a free hand and a generous budget to build up the navy. Hitler had been presented with two choices for his navy. The first proposed a cheap, light, flexible force, centered on submarines and the small but powerfully armed long-range cruisers that the British had nicknamed “pocket battleships.” This plan had no pretensions to challenging Britain as a naval power but carried great potential to harm her. The second was to build a big fleet of modern surface ships that would establish Germany as a world maritime force. He had chosen the grandiose option, with Raeder’s approval. The result was “Plan Z,” which Hitler had finally agreed to only two months before. It envisaged a fleet with ten battleships at its core and four aircraft carriers to provide the air power that was becoming a vital adjunct of naval operations. Supporting them would be fifteen pocket battleships, over a hundred cruisers and destroyers, and an underwater strength of more than 250 U-boats.

A force of this size would take up to ten years to build. The plan had been designed on the assumption, reinforced by Hitler’s frequent assurances, that a war with Britain was still well over the horizon. Only four years before, the two countries had signed the Anglo-German Naval Agreement, which Hitler mentioned in his speech. Germany agreed to limit its surface ship-building program to 35 percent of the British fleet and its submarines to 45 percent of the Royal Navy’s tonnage, with a clause allowing it to rise to parity in special circumstances. The deal was negotiated in a friendly atmosphere. Historically, both sides had felt respect for one another. When the commander of the British Fleet at Jutland, Lord Jellicoe, died in November 1935, Raeder ordered all German warships to fly their flags at half-mast.

A confrontation with the Royal Navy had seemed a distant prospect when Plan Z was being worked out. Now, with Chamberlain’s guarantee to the Poles, it loomed suddenly and alarmingly into view. Raeder’s exalted title scarcely reflected the might of his fleet. As he waved his landlubber leader off at the end of his Wilhelmshaven jaunt, he knew very well that he had limited assets with which to face the coming crisis.

The German fleet that spring had only two big ships in service —the battle cruisers Scharnhorst and Gneisenau, both weighing 32,000 tons. (All displacements are given as standard: minus the weight of fuel, water, and stores that would be carried on voyage.) There was a heavy cruiser, the 14,000-ton Admiral Hipper, which would be joined in the coming year by two ships of the same class, the Blücher and the Prinz Eugen. Three pocket battleships were in commission, the Deutschland, Admiral Graf Spee, and Admiral Scheer. Despite weighing only 12,000 tons, they packed heavy firepower in their six 11-inch guns. Of the four planned aircraft carriers, only one, the Graf Zeppelin, had been retired, but years of work remained. As for submarines, about fifty would be ready for operations by the summer’s end.

In numerical terms, this was a tiny force compared with the Royal Navy. It could muster twelve battleships with five more on the way, four battle cruisers, six aircraft carriers with another six under construction, and twenty-four heavy cruisers. Numbers were only equal below the waves.

But strength was not measured in numbers alone. The qualitative difference between the two fleets went a long way towards correcting the quantitative imbalance. The core of the German fleet was modern, whereas many of the British ships dated back to the previous war and only some of them had been updated. The new ships in the pipeline were inferior to their German counterparts. Britain, it would often be lamented in the years to come, had played the game squarely when it came to honoring the limitations agreements it had made in the interwar years. The Germans, on the other hand, had systematically and ruthlessly cheated.

All of Germany’s large ships were bigger than they were supposed to be. The Scharnhorst and Gneisenau were actually 6,000 tons heavier than officially claimed. The extra weight came from the thick armor plating which reduced the danger from the British battle cruisers’ heavier guns. They were also faster than claimed and could muster thirty-one knots, which gave them the edge over their counterparts if forced to run.

It was in the top class—the battleships—that German superiority was most marked. Since Tirpitz and her sister ship Bismarck were retired in 1936, the German Embassy in London had lied to the Foreign Office about their specifications on Raeder’s instructions. Instead of being 35,000 tons—the upper limit decided upon in the Anglo-German Naval Agreement—they would both weigh in at 42,500 tons. The British, by contrast, stuck to the rules. As a result the battleships of the King George V (KGV) class under construction were nearly 12 percent lighter than their German counterparts.

It was not merely a question of size. When finished, Tirpitz and Bismarck would best the Royal Navy’s new ships in every department. They each mounted eight 15-inch guns against the 14- inch main armament of the King George V. They were faster and could travel much greater distances without refueling. They were also immensely well protected, with thick layers of steel armor encasing decks and hull, turrets, engine rooms, and magazines. Their enemies often said that the Germans had declared their battleships “unsinkable.” The claim does not seem to have been made officially. The builders revealed after the war that the Kriegsmarine often intervened during the building of Tirpitz and Bismarck to “raise their levels of unsinkability.” The result was that, in the case of Tirpitz, 40 percent of her overall weight was made up of armor plating.

The belief grew that Tirpitz and Bismarck could survive any torpedo, shell, or bomb that the British ships or aircraft could hurl at them—and it was not unfounded. The British navy had been starved of funds in the postwar years and little effort had been made to develop new weaponry. Torpedoes and shells carried feeble charges and lacked penetrative power. The greatest failure to keep pace with technological developments lay in the area of naval aviation. The Admiralty was only now regaining control of the Fleet Air Arm from the RAF, whose equipment programs had given priority to fighters and bombers. The navy was entering the war equipped with biplanes that looked like survivors from the previous conflict.

This article is from the book The Hunt for Hitler’s Warship © 2015 by Patrick Bishop. Please use this data for any reference citations.  To order this book, please visit its online sales page at Amazon or Barnes & Noble.