The Kansas-Nebraska Act of 1854 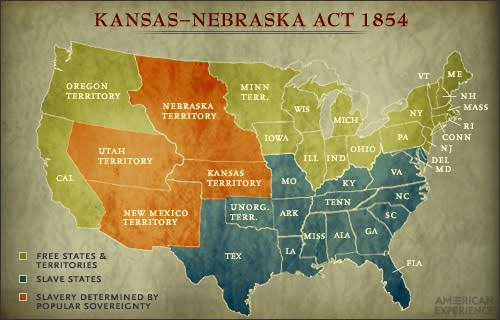 The Kansas-Nebraska Act of 1854 (10 Stat. 277) was an organic act that created the territories of Kansas and Nebraska.

The controversy over the Kansas Nebraska Act proved too much for the ramshackle Whig Party, which was torn apart by sectional antagonism. Filling the political vacuum left by the self-destruction of the Whig Party was the Republican Party, created in 1854 as a sectional party—just what so many American statesmen had tried to avoid. The Republicans attracted a variety of supporters with their free-soil position and their support for high protective tariffs.

As free-soilers, they opposed slavery in the territories, though the racialist motivation of such exclusion of slavery is clear from the party’s 1856 platform, which read, in part, that “all unoccupied territory of the United States, and such as they may hereafter acquire, shall be reserved for the white Caucasian race—a thing that cannot be except by the exclusion of slavery.” Their economic program, of which the protective tariff formed an important plank, could not have been better devised to attract Southern antipathy. Abraham Lincoln, who would be elected in 1860 as the first Republican president, had been a supporter of the protective tariff for several decades by the time he reached the White House.

For the more radical Republicans, the free-soil position was only the opening salvo in what they hoped would be the ultimate extinction of slavery. Conservative Republicans, no friends of slavery either, recognized that what was going on between the sections was a struggle for power, plain and simple. According to historian Eric Foner:

The idea of combating Southern political power and its economic consequences was the key to conservative support for the Republican party. Such measures as a Pacific railroad, a homestead act, a protective tariff, and government aid to internal improvements had been blocked time and again by the Democratic party, at the dictation, it seemed, of the South. The conservatives hoped to use the Republican party to wrest control of the federal government away from the slaveholders, and they viewed the sectional struggle as primarily a contest for political power.

The protective tariff was perhaps the most controversial economic issue of the antebellum period. High tariffs, intended to protect Northern industry from foreign competition, were a terrible burden to the agricultural South, which had little industry to protect. To Southerners, the tariffs meant higher prices for manufactured goods because they bought them abroad and paid the tariff or because they bought them from Northerners at the inflated prices that tariff protection made possible. Although certain sectors of the Southern economy, like Louisiana sugar growers, favored protective tariffs, in general the South opposed the tariff. (Tariff protection would have done little good for Southern products, since the South sold most of its goods on a world market.)

Likewise, federal land policy divided the sections. Northerners favored land giveaways by the federal government, while Southerners believed the federal lands should be sold. Southerners feared that without the revenue the federal government took in from land sales, there would be added pressure to raise the tariff to make up the loss. They also believed that a policy of free land, by increasing the overall amount of agricultural land in use, would tend to lower Southern land values. These were some of the economic issues that divided the sections, and they, as Foner observes, were never far from the surface in the debates of the 1840s and 1850s.