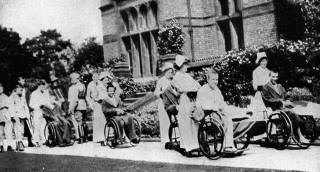 Dr Ludwig Guttmann was a German Jew who left Germany to escape Nazi persecution. He established the spinal injuries unit at Stoke Mandeville hospital and found that many of the hospital’s patients were young men injured in the Second World war. Guttmann believed that sport was would be good for the patients’ physical and emotional well-being and in 1948 organised the Stoke Mandeville games for British World War II veterans. This was the first event organised solely for disabled athletes. In 1952 injured Dutch veterans were invited to Stoke Mandeville to compete against the British.

Eight years later, in 1960, Sir Ludwig Guttmann took a team of disabled athletes to Rome to compete in a games parallel to the Summer Olympics. They were a great success and the Paralympic Games have been held immediately after the main Summer Olympics ever since. The first Paralympic Winter Olympics were held in 1976.

The Paralympics share many of the traditions of the Olympic games:

The Olympic flame burns throughout the competition

Gold, Silver and Bronze medals are awarded to winners

The Paralympic symbol (above) consists of three agitos coloured red, blue and green.
The agitos are meant to symbolise movement and the colours are the three most popular colours on national flags.

Although some Paralympic sports are specific to certain disabilities eg Wheelchair events, other events are open to a range of disabilities. To ensure equality and fairness the Paralympic Governing body has defined disabilities into five main groups – amputees, cerebral palsy, spinal injuries, visually impaired and others.

Sports that have featured in the Summer Games are:

Sports that have featured in the Winter Games are: