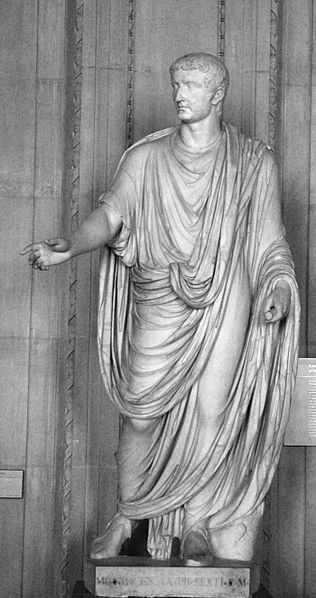 Roman clothes were made of wool, spun into cloth by the women of the family. Later on the richer people had slaves to do this work for them. If you could afford to buy clothes, you could buy linen, cotton or silk, which was brought to Rome from other parts of the Empire. Washing clothes was difficult because the Romans did not have washing machines or soap powder. They used either a chemical called sulphur or urine.

These are the clothes that Roman men wore 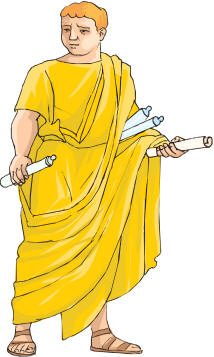 This man is wearing a toga. Only male citizens of Rome were allowed to wear togas. They were made out of wool and were very large. The material was not sewn or pinned but was draped around the body and over one arm. Togas were very expensive because of the large amount of material needed to make them and very heavy. It was the law that all citizens wore togas for public events. They were even told which colour of toga they had to wear:

A plain white toga was worn by all adult male citizens

A bleached toga was worn by politicians

A purple toga with gold embroidery was worn by a victorious general and later by emperors.

In later times it became more acceptable to wear togas of different colours with embroidery  but this was frowned on by those who preferred to keep to the established order.

The tunic was standard dress for all men from slaves to the nobles. It could be worn plain, belted at the waist or under a cloak. Citizens of Rome would wear a tunic under their toga.

The simplest and cheapest tunics were made by sewing two pieces of wool together to make a tube with holes for the arms. For those that could afford it tunics could be made of linen or even silk. The tunic would be worn belted at the waist and just covering the knees.

Both men and women wore a simple loincloth called a subligaculum under their clothes.

Indoors, the Romans wore open-toed sandals. However, outdoors they preferred to wear shoes that covered their toes. The Romans made shoes and sandals by fixing strips of leather to a tough leather or cork base. Sandals, to be worn indoors or in the summer, had a smaller number of leather strips. Shoes for walking, for winter or for soldiers had many more leather strips to cover the toes and provide more warmth.

Men were only allowed to wear one piece of jewellery – a ring that was used to make a mark in wax for sealing documents. However, many ignored the rules and wore several rings and brooches to pin their cloaks.

All men had their hair cut short and shaved. After the time of Hadrian some men began growing beards.