(See Main Article: The Stuarts- Interesting Facts on the First Kings of the United Kingdom)

The Stuarts were the United Kingdom’s first kings. For the first time, two thrones were combined when King James VI of Scotland became also King James I of England.

Click here to see more posts in this category. Scroll down to see more articles about the history of Stuarts.

Why is Guy Fawkes Celebrated?

Also known as Bonfire Night or Firework Night, Guy Fawkes is celebrated every year on the 5th of November in England (and some other countries). The history of Guy Fawkes dates back to 1605, when a group of Catholic extremists planned to assassinate King James I and hopefully get a catholic monarch on the throne. Guy Fawkes was the unfortunate soul who was put in charge of guarding the explosives that they have placed underneath the House of Lords. He was discovered and arrested, bringing an end to the Gunpowder plot and saving the king’s life. To celebrate the fact that their King survived an attempt to kill him, people lit bonfires all over London. A couple of months after the incident, the “Observance of 5th November Act” was passed as an annual public holiday.

Guy Fawkes has been celebrated for over 400 years already, although Guy was not the main conspirator. Legend has it that the word, “guy” actually used to mean “ugly and repulsive,” after the name of Guy Fawkes. After years frequent use, it lost the negative connotation and just became a synonym for “man.” The 2,500kg gunpowder stashed beneath the House of Lords had the potential of causing damage in a 500 meter radius, according to the estimates of physicists.

The Stuarts – The Pilgrim Fathers 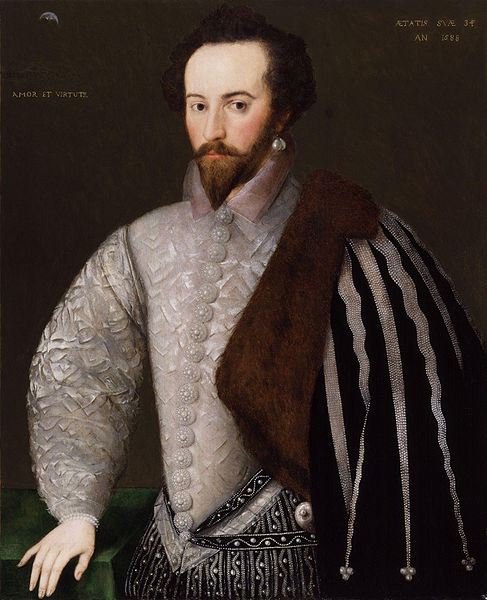 When James I came to the throne, he adopted a moderate Protestant religious policy. Both Catholics and Puritans were forbidden to practice their religions. Many extreme Puritans left England for Holland where Puritanism was accepted.

In 1607 Walter Raleigh had founded the colony of Virginia in America and a number of English companies had begun trading tobacco and other products between the colony and England.

One stock company, anxious to protect their business interests in Virginia recruited 35 members of the radical, Puritan, English Separatist Church, who had fled to Holland. The stock company agreed to finance the voyage for them and in return they would look after the company’s business in Virginia. Other Puritans keen to start a new life in America joined the voyage. 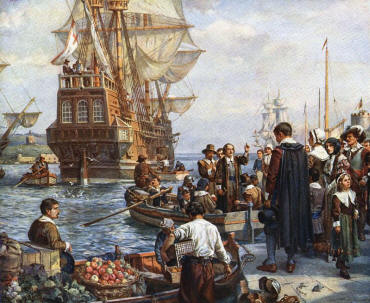 The Mayflower left the port of Southampton in August 1620 but was forced to put into Plymouth for repairs. The 102 passengers and 30 crew eventually left Plymouth for America on 16th September 1620 and steered a course for Virginia. The ship was a double-decked, three-masted vessel and initially the voyage went well but then storms blew up which blew them off course.

Land was sighted on November 9th and anchor was dropped. A landing party of sixteen men left the ship on November 15th but failed to find a suitable site to establish a settlement. They set sail again and resumed their search. On December 17th they reached Plymouth Harbour and dropped anchor.

On December 21st the first of the Pilgrim Fathers set foot on what would become Plymouth settlement. The harsh winter weather meant that they were unable to build adequate shelter and many of the travellers died during that first winter. Those that survived the winter went on to build houses and defences. In the late spring of 1621 a native American Samoset Indian offered to show the settlers how to farm the land and become self-sufficient if the men would help them fight a rival tribe. The settlers agreed and the Plymouth settlement flourished. 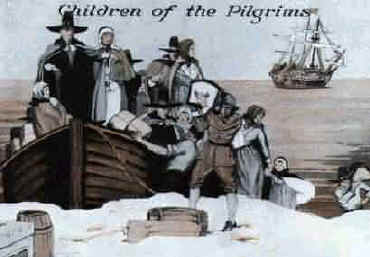 The first English monarch of the Stuarts, James I of England and VI of Scotland, succeeded to the throne of England when Elizabeth I died. He was the son of Mary Queen of Scots by her second husband Lord Darnley, and great-great grandson of Henry VIII’s sister Margaret.

In all there were seven monarchs among the Stuarts: James I, Charles I, Charles II, James II, William III and Mary II Anne. The period from 1649 to 1660 was an interregnum (time without a monarch), that saw the development of the Commonwealth under Oliver Cromwell.

The accession of James VI of Scotland as James I of England, united the countries of England and Scotland under one monarch for the first time.

James believed in the Divine Right of Kings – that he was answerable to God alone and could not be tried by any court. He forbade any interpretation of church doctrine different to his own and made Sunday Church-going compulsory. Catholics were not allowed to celebrate Mass and he refused to listen to Puritan demands for church reform, instead authorising use of the King James Bible that is still in existence today.

James I also introduced English and Irish Protestants into Northern Ireland through the Ulster Plantation scheme and tried to keep England at peace with the rest of Europe. Although he was a clever man, his choice of favourites alienated Parliament and he was not able to solve the country’s financial or political problems. When he died in 1625 the country was badly in debt.

(See Main Article: The Stuarts – Charles I – The Slide to Civil War)

Charles I came to the throne after his father’s death. He did not share his father’s love of peace and embarked on war with Spain and then with France. In order to fight these wars he needed Parliament to grant him money. However, Parliament was not happy with his choice of favourites, especially the Duke of Buckingham and made things difficult for him.

In 1629 he dismissed Parliament and decided to rule alone for the next 11 years. Like his father he also believed in the Divine Right of Kings and he upset his Scottish subjects, many of whom were Puritans, by insisting that they follow the same religion as his English subjects. The result was the two Bishops Wars (1639-1640) Charles’ financial state had worsened to such a degree that he had no choice but to recall a Parliament whose condemnation of his style of rule would lead the country to Civil War and Charles I to his execution in 1649.

In 1649, Oliver Cromwell took the title Lord Protector of the newly formed republic in England, known as the Commonwealth. His parliament consisted of a few chosen supporters and was not popular either at home or abroad.

Cromwell disliked the Irish Catholics and, on the pretence of punishment for the massacre of English Protestants in 1641, he lay siege to the town of Drogheda in 1649 and killed most of its inhabitants. Having conquered Ireland he declared war on the Netherlands – England’s greatest trade rival. He went on to establish colonies in Jamaica and the West Indies.

Although he faced opposition from those who supported Charles I’s son, Charles II, as the rightful King, (especially the Scots), Oliver Cromwell succeeded in establishing a sound reputation for the Commonwealth by the time of his death in 1658. He was succeeded by his son Richard, who had no wish to rule.

Cromwell’s opponents were easily able to overthrow him and after a period of anarchy the monarchy was restored with the accession of Charles II.

After the execution of his father in 1649, Charles assumed the title Charles II of England, and was formally recognised as King of Scotland and Ireland.

In 1651 he led an invasion into England from Scotland to defeat Cromwell and restore the monarchy. He was defeated and fled to France where he spent the next eight years.

In 1660 he was invited, by parliament, to return to England as King Charles II. This event is known as the Restoration.

He is known as the ‘Merry Monarch’ because of his love of parties, music and the theatre and his abolishment of the laws passed by Cromwell that forbade music and dancing.

Charles was extravagant with money and was forced to marry Portuguese Catherine of Braganza for the large dowry she would bring. He continued to have money problems and allied England with France, a move that led to war with the Dutch and the acquisition of New Amsterdam (now New York) for England. Charles II died in 1685.

James II succeeded his brother Charles to the throne. After the Restoration he had served as Lord High Admiral until he announced his conversion to Roman Catholicism and was forced to resign.

He succeeded despite the passing of the Test Acts in 1673 (which barred all Roman Catholics from holding official positions in Great Britain) and the efforts of Parliament to have him by-passed. The Duke of Monmouth immediately mounted an uprising against James II but it was crushed and a series of treason trials known as the Bloody Assizes followed. The Lord Chief Justice, George Jeffreys, sentenced more than 300 people to death and had another 800 forcibly sold into slavery.

The Bloody Assizes led to an increasing number of calls for James to be replaced by his son-in-law, William of Orange and in 1688 the Dutchman was invited to take the English throne. William’s subsequent invasion of England and accession to the throne is known as The Glorious Revolution. James fled to France where he lived until his death in 1701.

William III and his wife Mary II (daughter of James II), were proclaimed joint sovereigns of England in 1688 following the Glorious Revolution. They were accepted by Scotland the following year, but Ireland, which was mainly Catholic, remained loyal to James II. William led an army into Ireland and James was defeated at the Battle of the Boyne in 1690. Mary II died in 1694 and William ruled alone until his death in 1702.

Queen Anne was the sister of Mary II and was married to Prince George of Denmark. She was a committed Protestant and supported the Glorious Revolution that deposed her father and replaced him with her sister and brother-in-law. In 1707 the Act of Union formally united the Kingdoms of England and Scotland. She was the last monarch of the Stuarts, as none of her eighteen children survived beyond infancy.