The Titanic construction took place in Belfast by the shipbuilding company Harland and Wolff. The company was owned by Lord Pirrie, a friend of Bruce Ismay, managing director of the White Star Line (pictured below, left). The chief designer of the Titanic was his son-in-law, Thomas Andrews (pictured below right).

Construction of the Titanic began in 1909. Harland and Wolff had to make alterations to their shipyard (larger piers and gantries) to accommodate the giant liners, Titanic and her sister ship Olympic. The two ships were to be built side-by-side. 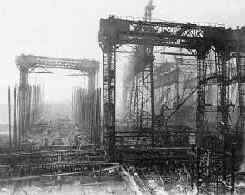 The giant gantries constructed by Harland and Wolff

Titanic was constructed with sixteen watertight compartments. Each compartment had doors that were designed to close automatically if the water level rose above a certain height. The doors could also be electronically closed from the bridge. Titanic was able to stay afloat if any two compartments or the first four became flooded. Shortly after Titanic hit the iceberg it was revealed that the first six compartments were flooded.

Titanic’s four funnels were constructed away from the site and were then transported to the shipyard for putting on the Titanic. Only three of the funnels were used to expel smoke and waste gasses. The fourth was added to make the ship look more powerful.

Titanic had three propellers which were powered by steam. The rotation of the propellers powered the ship through the sea.

The next ten months were spent completing the interior of the ship. Details and pictures of the interior can be viewed on the layout page of this site.