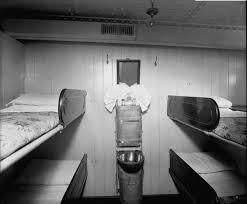 For more information on Titanic third class passengers and other information about the 20th century maritime history of the North Atlantic, see The Hunt for Hitler’s Warship © 2015 by Patrick Bishop. It is available now from Amazon or Barnes & Noble.

Many of the Titanic third class passengers traveling in rooms or steerage were emigrants traveling to the United States from Ireland and Scandinavia. In all some 33 nationalities were represented in the passenger lists. Accommodations were clearly more spartan than those for the first and second classes.

A ticket for Titanic third class passage cost between £3 and £8.

The information below contains statistics on some of the nationalities travelling in third class and survival accounts.

There were around 120 Irish passengers on the Titanic most of whom were emigrants hoping for a better life in America. Most of them did not make it. However, Anna Kelly who had gone up on deck to investigate what had happened, survived in lifeboat 16. She later became a nun.

There were about 26 Swedish passengers on board the Titanic of whom most were travelling third class. Many did not reach their destination. Mrs Hjalmar Sandstr, (Agnes Charlotta Bengtsson ) was travelling with her two daughters. They all survived the disaster in lifeboat 13.

There were 24 Belgians on board the Titanic, 23 in third class. Two lucky Belgians, Emma Duyvejonck and Henri Van der Steen were turned away at Southampton. Only 4 Belgians, all men, survived the disaster.

For more information about the Titanic third class and other information on the 20th century maritime history of the North Atlantic, see The Hunt for Hitler’s Warship © 2015 by Patrick Bishop. To order this book, please visit its online sales page at Amazon or Barnes & Noble.