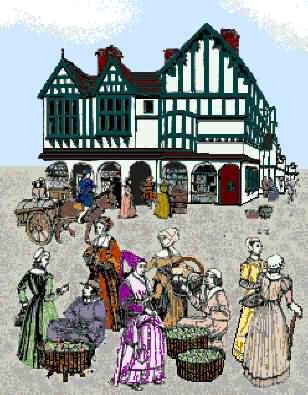 The Tudor market place was the place that the Tudors went to buy the things that they needed such as food and clothing.

People who had something to sell would set themselves and their goods in the market square and wait for people to come and buy their goods. In the picture above, the woman in blue and the woman in pink are selling baskets of fruit or vegetables, while the woman in orange has a basket of freshly baked bread for sale. In addition to fruit and vegetables, fish and meat would also be sold. It was not unusual for people to buy meat while it was still alive and only kill it when it was required.

Some people opened up the front of their houses and sold the goods from there, while others sold goods from a cart. Examples of both can be seen in the picture above. Ale would also be sold in large quantities on market day.

The money system used to buy goods was not the same as it is now. The pound was still the unit of currency, but instead of pounds and pence, the Tudors had pounds, sovereigns, crowns, half-crowns, shillings, sixpences, groats and pennies. Their values were:

Sometimes a barter system of exchanging goods for other goods would be used instead of money.