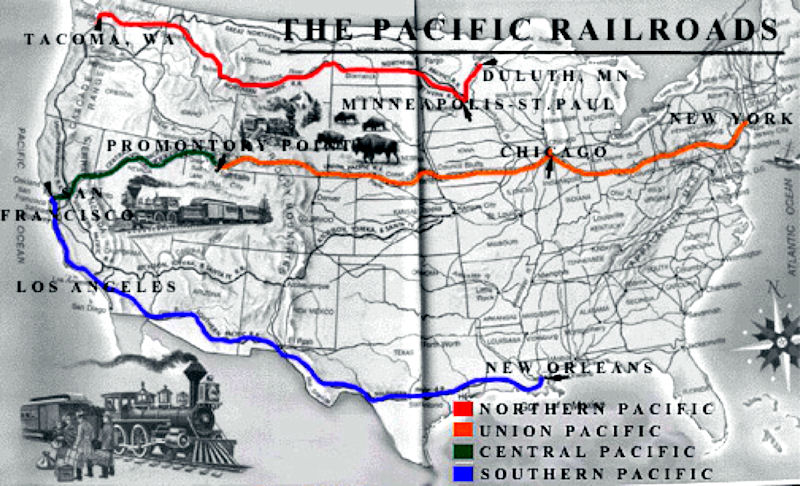 The transcontinental railroad in the latter half of the nineteenth century was typically built with substantial infusions of federal, state, and local government aid. This aid took two forms: loans and land grants. The railroads sold the land to settlers for cash. In the process, they also created a market for their services. Those who lived near their railroad now had livelihoods that hinged on the railroad’s success, usually because they needed it to ship their freight.

The Pacific Railway Act of 1862 called for the laying of track by the Union Pacific (UP) and the Central Pacific (CP), the former going west from Omaha and the latter going east from Sacramento. The two roads would eventually link.

The project had more than its share of problems. The government subsidies introduced perverse incentives, all chronicled by Professor Folsom. Since the railroad companies received land and loans in proportion to the amount of track they laid, management had an incentive to lay track rapidly in order to collect as much federal aid as possible. There was much less emphasis on the quality of track laid or on following the shortest possible route than there would have been in the absence of these government handouts. To the contrary, circuitous routes meant more track laid and therefore more federal aid. Moreover, since low-interest loans were granted in higher amounts for more mountainous terrain, the railroad companies had greater incentive to lay track over less suitable land than if they had had to lay track with their own resources.

As the two tracks approached each other in Utah in 1869, more serious troubles began. Seeing the end of subsidies looming, the two lines built track parallel to each other instead of joining, and both lines applied for subsidies on the basis of the parallel track. Worse, physical destruction and even death resulted when the mainly Irish UP workers clashed with mainly Chinese CP workers. The celebrations that took place on May 10, 1869, when the two lines finally met, obscured the often shoddy workmanship that government grants had inadvertently encouraged, and it was not until several years later that all the necessary repairs and rerouting were completed. Looking back on the construction process, UP chief engineer Grenville Dodge remarked, “I never saw so much needless waste in building railroads. Our own construction department has been inefficient.”