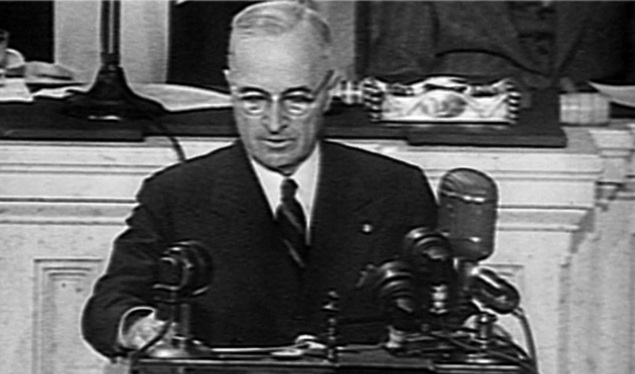 The Truman Doctrine was an American foreign policy whose stated purpose was to counter Soviet geopolitical expansion during the Cold War. It was announced to Congress by President Harry S. Truman on March 12, 1947, and further developed on July 4, 1948, when he pledged to contain threats in Greece and Turkey.

Direct American military force was usually not involved, but Congress appropriated financial aid to support the economies and militaries of Greece and Turkey. More generally, the Truman Doctrine implied American support for other nations allegedly threatened by Soviet communism. The Truman Doctrine became the foundation of American foreign policy, and led, in 1949, to the formation of NATO, a military alliance that is still in effect. Historians often use Truman’s speech to date the start of the Cold War.

In 1947, the president called for aid to Greece and Turkey as part of an overall strategy to assist nations that were in danger of Communist takeover by internal subversion or external aggression. This became known as the Truman Doctrine. Some conservatives, like Senator Robert A. Taft (who was known as “Mr. Republican”), sharply criticized Truman’s approach. Not only would it potentially involve the United States in countless conflicts around the globe, but it was also, in his view, founded more in hysteria and paranoia than in a rational and sober appraisal of Soviet capabilities. To these budget-minded conservatives, Truman’s policy seemed typically liberal: utopian, unrealistic, partial toward big government, and thoughtless of cost.