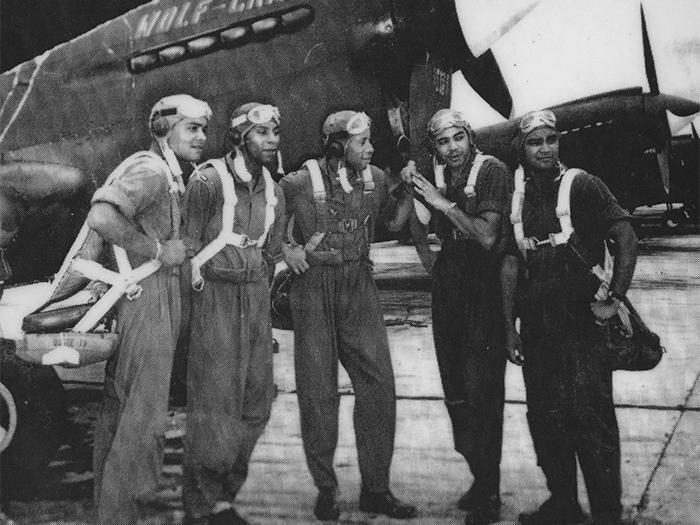 The Tuskegee Airmen planes were primarily, but not exclusively, the following five WW2 aircraft:

The Bell P-39 Airacobra was one of the principal American fighter aircraft in service when the United States entered World War II. However, they were less maneuverable that later aircraft and preferred to be used for homeland defense. Before the formation of the Tuskegee Airmen, the military considered a black fighter group use such planes for homeland defense.

The Tuskegee Airmen plane had an innovative layout, with the engine installed in the center fuselage, behind the pilot, and driving a tractor propeller via a long shaft. It was also the first fighter fitted with a tricycle undercarriage

The P-40 was a single-engined, single-seat, all-metal fighter and ground-attack plane that was arguably the United States’ best fighter plane available in large numbers when World War II began. Developed in 1938, the P-40s engaged Japanese aircraft at Pearl Harbor and in the Philippines in December 1941.

The Tuskegee Airmen class of 1944 received 10 flight hours of fighter lead-in training in hand-me-down P-40 Warhawks. These were weary and otherwise obsolete planes, but with superior performance to any of the trainers. Because air combat was a certainty for the recent graduates, they welcomed any flight time in real combat platforms, even if lackluster compared to the war’s more modern fighters.

The fighter was often slower and less maneuverable than its adversaries, but the P-40 earned a reputation in battle for extreme ruggedness. The Tuskegee Airmen airplane served throughout the war but was generally disfavored by more capable aircraft.

Most famous for its use in the Pacific—especially Lt. Col. James H. Doolittle’s April 1942 raid on Japan—the Mitchell nevertheless was used in nearly every theater of operation. The twin-engine medium bomber entered service in early 1941, powered by two 1,700 hp Wright R2600s.

The B-25 Mitchell was a medium bomber operated by the all-black 477th Bombardment Group, which did not prepare in time to be deployed abroad.

Though the USAAF did not deploy B-25s to Britain, the RAF received 712 Mitchells, assigned to at least seven squadrons beginning in 1942, with combat operations commencing in January 1943. The American ETO medium-bomb groups were equipped with B-26s or A-20s, reportedly because of concern about the B-25’s ability to stand up to the intense flak over Western Europe.

Top speed of the Mitchell II was rated at 284 mph at fifteen thousand feet.

Despite the U.S. policy, British Mitchells were employed in medium-level missions against transport and communications targets in France. B-25s were widely distributed among other Allied air forces, including those of Canada, Australia, the Netherlands, Brazil, China, and the Soviet Union.

This Tuskegee Airmen plane was widely considered the finest fighter of World War II, and the war’s premier piston fighter. It was a single-seat, single-engine fighter/fighter-bomber aircraft. The Tuskegee airmen loved these planes for their clean lines and an aesthetic that made them incredibly alluring. They fit the old adage that if an aircraft looks right, it’ll fly right.

The Mustang owed its origin and its name to the Royal Air Force. The British aviation-purchasing commission approached North American Aviation in May 1940, seeking a quick solution to the RAF’s shortage of modern fighters. NAA responded in record time, flying the prototype barely five months later. Powered with an Allison engine, the Mustang I possessed excellent performance at the low and medium altitudes at which it was employed as a reconnaissance aircraft.

The U.S. Army Air Forces were impressed with the type and adapted it as the Apache. Both P-51A fighter and A-36 dive-bomber versions were procured before a 1,500 hp Rolls-Royce Merlin was mated to the airframe, resulting in an astonishing speed increase of 50 mph, ultimately reaching 435 mph. At that point a legend was born, and the P-51B turned into a world-beater. Entering combat with the Ninth Air Force in late 1943, the Mustang immediately proved its value with long range and superior high-altitude performance—ideal for escorting daylight bomber formations deep into Germany. With four .50 caliber machine guns, the P-51B and C began taking a toll of Luftwaffe interceptors deep in German airspace.

Developed from a succession of prewar Seversky and Kartveli designs, the Republic P-47 was conceived and built for the Army Air Corps as a high-altitude interceptor. Its awesome battery of eight .50 caliber machine guns was meant to destroy hostile bombers; ironically, however, the Thunderbolt would make much of its reputation as a low-level attack aircraft. They were frequently flown by Tuskegee Airmen.

Many had cut their teeth on the P-47D/G during pre-deployment fighter lead-in training. The pilots considered the “N” model to be a great fighter – even surpassing the highly regarded P-51 Mustang. Although the P-47N did not match the Mustang’s roll-rate, it had greater endurance due to its having been designed for ultra-long-range bomber escort missions over Pacific waters. Indeed, the wings had been elongated and strengthened to accommodate extra fuel.

The “N” model was powered by an uprated Pratt & Whitney R-2800 Double Wasp engine. The cockpit was spacious and ergonomic by the standards of the day. To top things off, the last of the Thunderbolt breed had an autopilot, an augmentation that was notable for easing pilot workload on long missions. Taken together, these elements produced a regal effect for the pilot.

The type held great promise in its planned role. However, once the P-47N reached Pacific squadrons in 1945 it saw minimal action escorting B-29 Superfortresses. The war against Japan ended abruptly with the dropping of atomic bombs on Hiroshima and Nagasaki in early August. In the immediate postwar years, the Air Force kept some of the planes in active units as a bridge to the next generation fighters which were practically all jets.

The P-47D was clocked at 429 mph at twenty-nine thousand feet. In 1944, when nearly half of all Thunderbolts were built, a representative D model cost $85,578, or thirty-four thousand dollars more than a Mustang.

Total Thunderbolt acceptances were 15,585 from 1941 to 1945. Other users included the RAF, the Free French air arm, and (in limited numbers) the Soviet air force.