Unity Mitford might be the least likely of her sisters to be forgiven when one examines the history. It can be so difficult to tell the Mitford sisters apart. As Laura Thompson points out in her steller book, “The Six”, “some people may have thought that Nancy was the Fascist and Unity the Communist, but they pretty much had the basic idea. Equally familiar was the collective aspect of the sisters: their irrepressible aristocratic levity, their variations-on-a-theme faces, their idiom. The Mitfords inhabited a linguistic microclimate, whose almost nursery way of speech (‘oh do be sorry for me’) is famous above all for the nicknames they gave to everybody, especially to each other, which began as a private joke and were later displayed for public consumption. Again, people may have sometimes got things confused and thought that Woman was the Nazi and Honks the writer, or that Stubby was the Countrywoman and Bobo the Duchess; nevertheless there was an awareness that this was how the Mitfords went on”.

It has been speculated by several biographers that Unity’s turn to fascism and the subsequent embracing of Nazi ideology was a way to assert her individuality and separate herself from her charismatic and often overshadowing, sisters. David Pryce-Jones, editor for National Review and Mitford biographer said that “If you come from a ruck of children in a large family, you’ve got to do something to assert your individuality, and I think through the experience of trying to force her way forward among the sisters and in the family, she decided that she was going to form a personality against everything”. Diana Mosely biographer Jan Dalley doesn’t seem to disagree, adding that she “think[s] the desire to shock was very important, it was the way that [Unity] made herself special. When she discovered Nazism and discovered that it was a fantastic opportunity to shock everybody in England she’d discovered the best tease of all.” According to Unity biographer Giles Milton, “in the summer of 1934, she traveled to Munich in the hope of meeting her idol, Adolf Hitler. Although he was Führer of Germany, it was relatively easy to see him in public since he was accustomed to eating at the same cafes and restaurants each day. When Unity learned that he often had lunch at the Osteria Bavaria, she began eating there as well. She did everything she could to catch his attention. Yet ten months were to pass before Hitler finally invited the persistent English girl to his table. The two of them chatted for half an hour and quickly realized they were soulmates.‘It was the most wonderful and beautiful [day] of my life,’ wrote Unity Mitford to her father. ‘I am so happy that I wouldn’t mind a bit, dying. I’d suppose I am the luckiest girl in the world. For me, he is the greatest man of all time’.”

Her feelings were reciprocated. Hitler was particularly intrigued by Unity’s middle name, Valkyrie. And he was fascinated to learn that her grandfather had translated the anti-Semitic works of Houston Stewart Chamberlain, one of his favorite authors.

Giles went on to write that “Hitler began to see more and more of his fair-haired English companion, much to the annoyance of his ‘official’ girlfriend, Eva Braun. ‘She is known as the Valkyrie and looks the part, including her legs,’ wrote Braun scornfully in her diary. ‘I, the mistress of the greatest man in Germany and the whole world, I sit here waiting while the sun mocks me through the window panes.’

Unity was now introduced to members of Hitler’s inner circle. She got along particularly well with the thuggish Julius Streicher, publisher of the vitriolic anti-Semitic newspaper Der Stürmer.

When Unity delivered a particularly racist diatribe against the Jews, Streicher asked if he could print it in his paper. Unity Mitford was flattered. ‘The English have no notion of the Jewish danger,’ began her article. ‘Our worst Jews work only behind the scenes. We think with joy of the day when we will be able to say England for the English! Out with the Jews! Heil Hitler!’ She ended her text with the words: ‘Please publish my name in full, I want everyone to know I am a Jew-hater.’

Hitler was so pleased with what Unity Mitford had written that he awarded her a golden swastika badge as well as a private box at the 1936 Berlin Olympics.

She now became one of the Führer’s intimates, visiting him on numerous occasions and constantly expressing her admiration for him. He was no less smitten with her: in 1938, he even offered her an apartment in Munich. Unity had high hopes of replacing Eva Braun in his affections. By now, her behavior had aroused the suspicions of the British Secret Service. The head of MI5, Guy Liddell, was particularly alarmed by her closeness to Hitler. He felt that her friendship with him warranted her being put on trial for high treason. Unity refused to leave Germany, even after Britain’s declaration of war on 3 September 1939. Yet she was deeply depressed by what had happened, not least because of the implications it had for her relationship with Hitler.”

Finally, Giles wrote that “Unity refused to leave Germany, even after Britain’s declaration of war on 3 September 1939. Yet she was deeply depressed by what had happened, not least because of the implications it had for her relationship with Hitler. She took herself to the English Garden in Munich, held to her head the pearl-handled pistol that had been given to her by Hitler, and pulled the trigger. She was badly wounded but, amazingly, survived. Hospitalized in Munich (the bills were paid by Hitler), she was eventually moved to Switzerland. When she had partially recovered, her sister, Deborah, flew to Bern in order to take her home to England. ‘We were not prepared for what we found: the person lying in bed was desperately ill. She had lost two stone (28 pounds), was all huge eyes and matted hair, untouched since the bullet went through her skull.’ What happened next remains shrouded in mystery. According to the official account, she was taken to the family home at Swinbrook, Oxfordshire. She learned to walk but never made a full recovery. She eventually died in 1948 as a result of meningitis caused by the bullet in her brain. But there is also a more intriguing story about her return to England. There are rumors, never confirmed, that she was taken to a private maternity hospital in Oxford. Here, in absolute secrecy, she gave birth to Hitler’s love child.”

Didi Unity Mitford Have A Baby With Hitler? 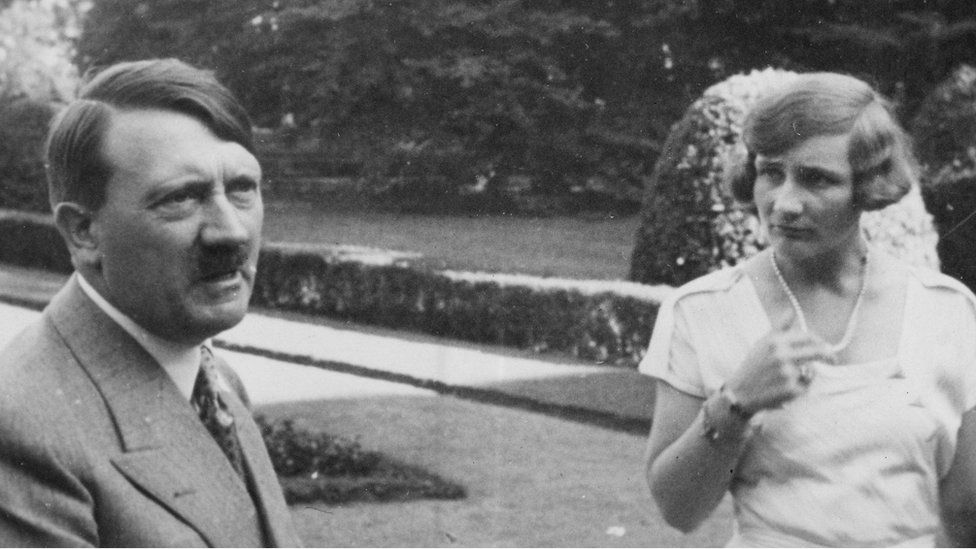 Journalist Martin Bright wrote in an article for The New Statesman that ” [Val Hann] had read an article I had written about Unity Mitford, the 1930s society beauty who became a groupie to Adolf Hitler and shot herself in Munich at the outbreak of war. Although the bullet entered her brain, Unity survived and lived out the rest of her short life as an invalid. But my caller claimed to have an extraordinary new angle on the story. Val was a little nervous as she explained that her aunt Betty Norton had run a maternity home to the gentry in Oxfordshire during the war and that Unity Mitford had been one of her clients. Her aunt’s business, in the tiny village of Wigginton, had depended on discretion and she had told no one except her sister that Unity had had a baby. Her sister had passed the story on to her daughter Val.

I casually asked who she thought the father might be and there was a short silence on the other end of the line before she said: “Well, she always said it was Hitler’s.” I must say I was tempted at this point to put down the phone. Christmas was coming and I was very busy. But for some reason, I decided to carry on listening to this bizarre tale. Val didn’t sound mad, and she said she was merely passing on a family story.The child was a boy, she believed, and he had been given up for adoption. She didn’t want any money; she just wanted me to look into it. So here was the prospect of Adolf Hitler’s love child alive somewhere in Britain – it was either the scoop of the century or completely bonkers. But it had to be worth a few hours of my time, even if it turned out to be a dead end.

According to the BBC, Unity died in 1948 in Oban at the age of 33 as a result of meningitis caused by swelling around the bullet lodged in her brain.