Viking games and entertainment occupied the time of these people between conquest raids and trade journeys, and they were quite complicated. While Vikings worked hard, they also played hard. From grave goods and the sagas, we learn that Vikings played board games avidly, carved wooden dolls and toys for their children, played dice and gambled and played rough sports at their feasts and gatherings.

The board game enjoyed most often by Vikings was Hnefatafl, which they took with them to Greenland, Iceland, Scotland, Ireland and Great Britain. Unfortunately, we do not know the rules of the game except that it was a game of strategic skill. Two players of unequal strength engaged in the game. One player was by far the strongest, with the most pieces. His job was to corner the king, who was defending his castle with a much smaller force. A variety of Tafl games existed in many areas, but during the Viking Age, hnefatafl was the most popular. It lasted until the 12th century when chess was introduced into Scandinavia. 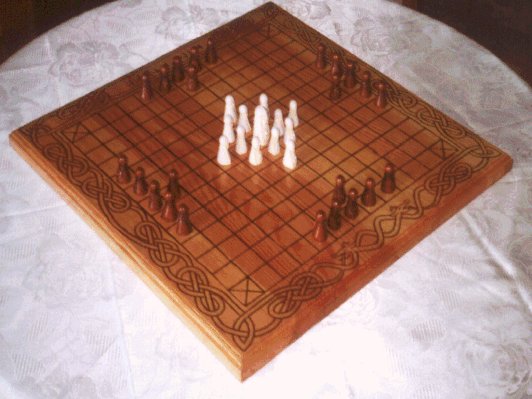 Other indoor games including drinking games with man/woman teams. Each team would drink, then boast, tell rhymes and insult the other team. The second team would then try to out-drink and out-insult the first team. The object was to see who could drink the most and remain articulate and witty. After meals, adults might bring out the dice and gamble or they might sing and tell stories.

Outdoor games were greatly popular. Based on Viking warrior skills, there were competitions in archery, wrestling, stone throwing and sword play. Horse fighting was also popular; two stallions would be goaded into fighting. Occasionally mares would be tied up around the field, within the sight and smell of the stallions. The horses would battle until one was killed or ran away.

Vikings engaged in running, swimming, tug-of-war called toga-honk and wrestling. Vikings also played a ball game with stick and ball. It wasn’t uncommon for someone to get hurt or even killed, as Vikings played rough. Women did not participate in these games, but they would gather to watch the men.

Children played with wooden toys their parents carved, or they played ball and also engaged in child versions of adult games. Child-sized replicas of weapons such as swords, shield and spears were found buried with other grave goods.

This picture of Vikings at leisure and play helps to round out the impression of Vikings as raiders and killers, left to us by their victim monks. In their leisure time, Vikings liked to play as much as any other people of the time.