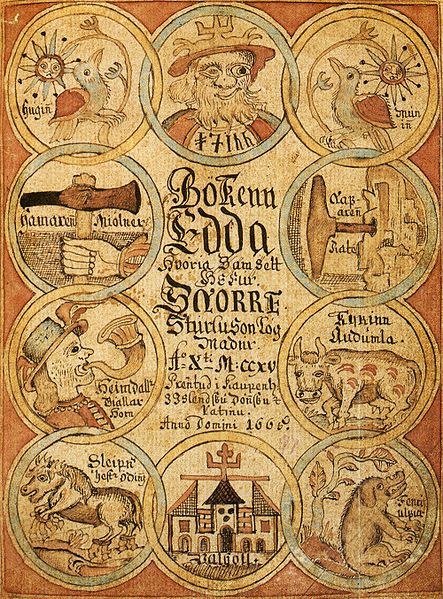 Viking culture was rich in stories, tales and poems. Kings, brave heroes, beautiful women, dangerous journeys, battles, fearsome dragons and otherworldly creatures were all subjects of tales told by skalds and everyone else. In the Viking Age, no one wrote them down, but everyone knew them, mostly by heart.

Long winters when people were cooped up inside were fertile soil for these stories of old. For centuries, they were kept alive in the hearts of Scandinavians by storytellers. However, the great literature of the Viking Age was in danger of being completely lost as time went by, old folks died and younger people didn’t remember. Finally, with the advent of Christianity in Iceland, Christian churchmen taught the Icelanders to write. Educated men in Iceland saved all of it, from the poetry to the family legends and feuds, by writing it down. Most importantly, now no one would now forget this rich heritage.

Thanks to men like Snorri Sturluson, an Icelandic writer, a great flowering of Viking Age literature was produced in Iceland in the 13th century. Sturluson himself produced many of these works: Poetic Edda and Prose Edda, books about Norse mythology and heroes, the Heimskringla, a book about the kings of Norway, Scandinavian history and most likely, Egil’s saga. Sturluson was a lawspeaker at Iceland’s Althing, a poet, historian and politician. Most of what we know about the Viking Age comes from these Icelandic collections of poems, tales, sagas and stories.

All of this Norse literature was written in the vernacular, the language of Iceland, which was unusual for medieval times. Latin was used by educated people and was the usual language employed when writing anything from laws to fairy tales. Viking literature in the vernacular is the only other body of writings in the people’s language besides the Irish hero tales.

Of Norse poetry, there are two varieties: skaldic poetry and eddaic poetry. Skalds were the Viking’s poets and wrote complex, compelling verse usually honoring a king or patron. Eddaic poetry was anonymous and could be about anything—its subjects were humorus, scathing, bawdy, romantic, heroic or brusquely insulting.

Sagas are stories, somewhat like historical fiction. While many of the characters and event are real, saga writers took poetic license in describing them. The events themselves took place a few hundred years before, which is why they should be considered fiction, not fact. Sagas are prose, occasionally with poetic stanzas in the text. The subjects are tales of men’s deeds, battles, journeys, feuds and fights. The subjects could be Christian or pagan, realistic or fantastic, tales of giants or saints or heroes or even regular people.