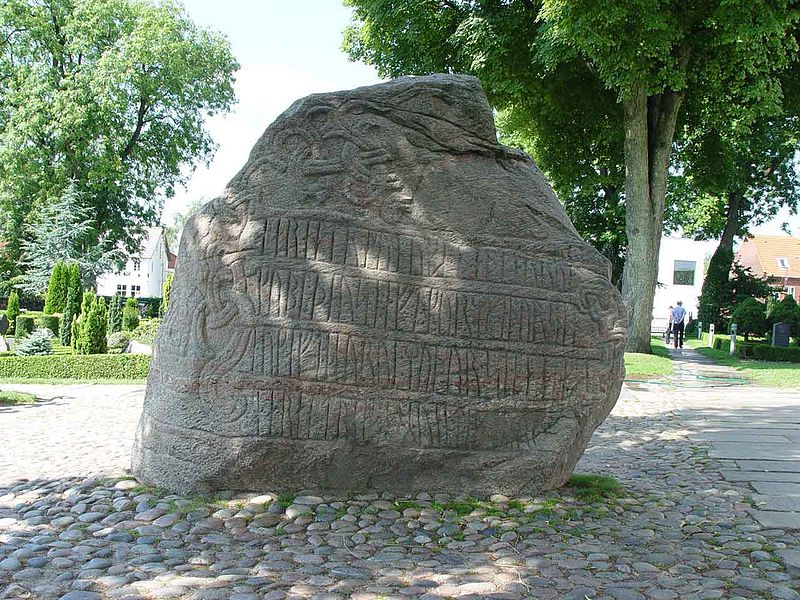 The Germanic people, including the Norse Vikings, had developed a written alphabet as early as A.D. 100. This alphabet is known as the futhark, named for the first six letters. There are three main forms, the Elder Futhark, with 24 characters, predominantly used from A.D. 100 to 800; the Younger Futhark of 16 characters, which was used from A.D. 800 through the Viking Age until 1200; and the 33 character Anglo-Saxon Futhorc, used mostly in England. The Younger Futhark was Latinized during the Christian era in Scandinavia and became the Medieval Futhark.

Runes were carved on stone, bone, antler, wood and metal. Runestones were big rocks covered with inscriptions of runes usually in memory of a great man or woman. Over 3,000 runestones are located in Scandinavia. Runic inscriptions are found on grave markers, cenotaphs and memorials more often than on any other object. However, runic inscriptions are also found on

Runes had been thought to be predominantly used for runestones and for other memorial or religious purposes. However, an important excavation in Bergen, Norway in the 1950s revealed that runes were often used for business and everyday uses as well. Runic inscriptions expressing prayers, love letters, jokes and gags and personal messages were found in quantity there.

Runic inscriptions, however, are rarely found on manuscripts. While a runic alphabet can be used for writing a document, that wasn’t their purpose, as the Norse culture was an oral culture. Rather, the futhark was used for memorial purposes, or to identify an object or for magical reasons, for cursing or healing.

The historical origins of the runes came from the days when Germanic warbands raided people living south of them, in present day Italy. Scholars debate whether the runes were derived from an Old Italic alphabet or perhaps from an Etruscan script. The Germanic warbands would have brought back the alphabet from those raids to the south.

The Norse people, however, knew that Odin had discovered the runes as he hung himself on Yggdrasil, the world tree, for nine days. During this ordeal, Odin fasted and stared into the Well of Urd, where he perceived the runes.

Runes, then, besides their use as a written code, have magical properties. Runes were often used in magical charms for protection and for healing. They were also used to lay a curse. Runes themselves were thought to carry magical power.