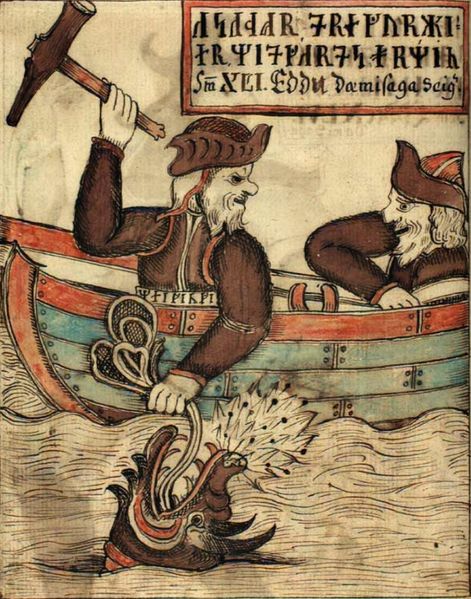 Like many older cultures, the Vikings had a professional class of poets and storytellers who carried the history, literature and mythology of the Norse culture in their heads. No poetry or sagas were written in the early years of the Viking Age; rather the history of the Norsemen and the stories of their gods and goddesses were memorized and told wherever a group would meet.

Those who did the memorizing and composed the poems and stories were called skalds. Skalds were much like the Irish and Scottish ollaves or bards or the Anglo-Saxon scops. These men held the entire Viking culture in their heads. They used their knowledge to convey the Viking’s literature, poetry, history and stories to the people from generation to generation.

Skalds played an important role in Viking society and were both honored and feared. The fear of a skald comes from his ability to compose sarcastic poetry about people that could harm a king’s standing or reputation. Mostly, however, skalds praised their lords and were well-rewarded for their efforts. Skalds were also teachers, historians and advisors to their lords, their people and children. Skalds conveyed essential information about how to behave in society through their poems and stories. Some say skalds were also musicians, playing the harp or lute while reciting poetry or sagas, although there is no conclusive evidence of it.

From a skald’s poems and stories, children learned Viking history, literature and mythology. They picked up clues about the gods, honor, courage, initiative and other Viking virtues from the skalds. Children learned about the great men and their deeds, they learned of beautiful women and courageous heroes. Skalds made history come alive, and the gods and goddesses were fleshed out and became vividly real and alive to all who listened to the stories and poems.

Skaldic poems could be reverent or boastful, humorous and boisterous, witty, defiant or even obscene. Poetry was a gift of Odin’s, the greatest of the gods, and most poems were reverent and respectful. Stories too could be hero’s tales or sarcastic stories of greed and mischance. Any storyteller was welcome for their ability to entertain. They were especially welcome during the long Scandinavian winters when people were forced indoors.

During the Viking Age, all poetry was oral, none of it was written down. Neither were the stories or histories. It wasn’t until the Vikings transitioned from pagan to Christian that writing became common. In the 11th century, educated men in Iceland began recording all the poems, histories, mythologies and stories in books. To this day, we can enjoy the rousing poems and sagas, thanks to the latter-day skalds in Iceland.