What Foods did the Medieval Barons Eat?

Look at the picture and read the text below to find out about the eating habits of the Medieval Baron. 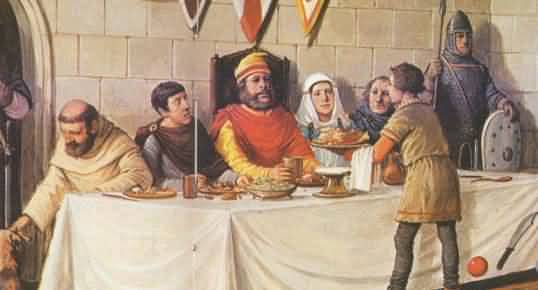 The Baron sat at the head (top) of the table. Less important people would sit on stools or benches at trestle tables lower down the hall. The baron was always served first.

Bread would have been served at every meal. It would be made each day in the Baron’s kitchen.

The Baron’s dinner would be washed down with either ale or mead. Ale was a weak beer made with hops while mead was a drink made by fermenting (brewing) honey.

Dishes of vegetables like peas, beans and onions would be served to accompany the food served when they were in season.

The Baron’s diet would be quite rich in meat. Hunting was a popular sport among the rich and their kills were brought back to the Manor house and served for dinner. Some meat would be preserved by salting or smoking for the winter months.

Entertainers such as jugglers, tumblers and musicians would entertain the diners while they ate.

The Knight is standing behind the Baron’s table ready to protect him in case of attack.

Although there were both knives and spoons in the Medieval period, there were no forks. People tended to eat with their fingers and there would always be a finger bowl on the table for people to wash their fingers in.

A Comprehensive Guide to Medieval Life