When Did WW2 Start? The Italo-Ethiopian War

When Did WW2 Start? Well, the Italo-Ethiopian War is a rarely discussed event that could be seen as a major contributor.

The following is a guest post from Nick Bobertz. You can read more about him at the bottom of this post. 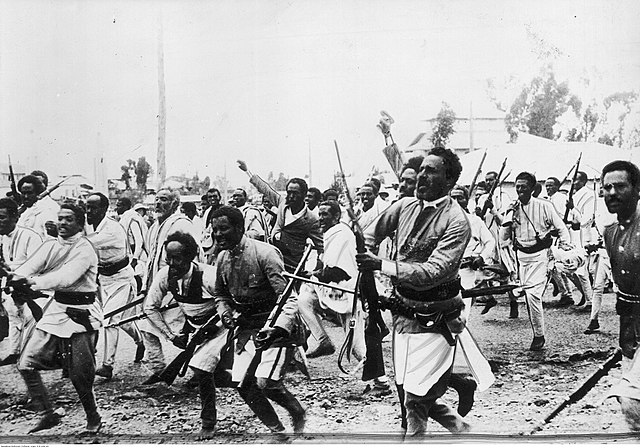 When you ask a history buff about the causes that led to the second World War they often talk about 3 factors; rising inflation, military expansionist policy in Germany and Japan, and the great depression. However, one of the most hidden and important causes of World War 2 was the 1935-1937 war between Italy and Ethiopia that proved to the world that the League of Nations was powerless to stop wars of aggression.

There are 3 reasons why the 1935-1937 war between Italy and Ethiopia was one of the most important events that led to World War 2. First, the second Italo-Ethiopian War demonstrated the importance of lighting fast modern warfare. Second, Germany would arm the Ethiopian army with weapons which prolonged the war and crushed Italy’s economy. Third, the Italo-Ethiopian War demonstrated that the League of Nations was powerless to prevent wars of aggression.

Many people outside of the history profession overlook the importance of this conflict. The Italo-Ethiopian war gave Hitler an opening to begin to conquer Europe with essentially nothing stopping him.

Without wasting any time, let’s jump into the 3 reasons why the Italo-Ethiopian War of 1935-1937 directly led to World War 2. 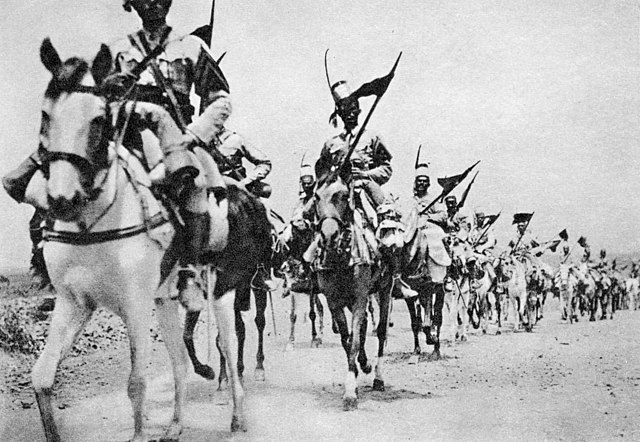 One of the biggest reasons why the second Italo-Ethiopian War was a major factor in answering the question of when did WW2 start. It demonstrated the importance of lighting warfare on a large scale.

Italy had been preparing to fight a war of aggression in Ethiopia for several years before the invasion. Starting in 1935 the Italian economy began to build and outfit a massive expeditionary army that totaled over 500,000 soldiers, 600 tanks, 1,500 artillery cannons, and over 400 reconnaissance aircraft.

Simply put, Italy had managed to turn its entire economy into a war machine and was throwing nearly everything it had at a fast war that hopefully would be over before the international community could effectively respond. This is important because since WW1 most conflicts were small and were not designed to be over in a couple of months. The world was watching Italy to see how effective this type of war would play out.

At 5:00 am on the 3rd of October, 1935, around 300,000 troops, tanks, planes, and cannons marched into Ethiopia. Within 12 days Italy had managed to push to Axum and by early November had managed to seize nearly all of Northern Ethiopia. By March/May of 1936, Italy was in nearly complete control over Ethiopia and the Ethiopian Emperor Haile Selassie was forced to go into Exile.

Within less than 6 months Italy had conquered new territory with a fast-moving agile army that was equipped with modern weaponry. While Italy would continue to fight a defensive war in Ethiopia up until 1939 attempting to gain complete control over Ethiopia the damage was done. The world had now seen how fast their borders could be compromised with a fast-moving army.

So why is this important? Well, Adolf Hitler would take this very same form of warfare and adapt it to a much larger economic military machine. For a while, Germany had been building up its military for a war of aggression in Europe and now Hitler was given proof that this new style of warfare was extremely effective against the unprepared militaries of Europe.

When Did WW2 Start?: Germany Purposely Crushed The Italian Economy To Foster Dependence 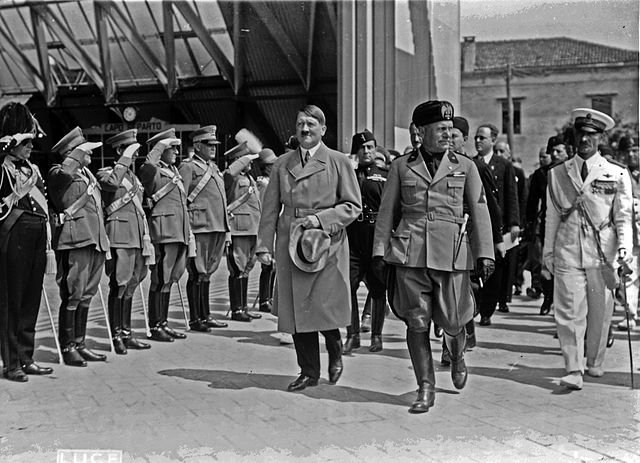 (Adolf Hitler walking with Mussolini during a state visit to Venice in 1934, public domain, Library of Congress’s Prints and Photographs division)

Another reason why the second Italo-Ethiopian War of 1935-1397 was a major contributing factor leading up to the start of World War 2 was that Hitler armed the Ethiopian army which prolonged the war. This caused Italy’s economy to falter and led to a dependence on German goods.

Many people either forget or don’t know that initially, Italy was firmly against German expansion in Southern Europe. From 1933 up until 1936, Benito Mussolini would support the independence of Austria against German colonization. This was because Mussolini was afraid that if Germany took control of Austria the next stop would be seizing territory in Northern Italy.

From 1933-1936 Italy had a strong enough economy to pose a threat to German advances into Austria. However, with the start of the Italio-Ethiopian war in 1936 Germany had an opportunity to drain Italy’s economic reserves by selling modern weaponry to Ethiopia.

From 1930-1936 Germany would help arm the Ethiopian army as part of the modernization of Ethiopia under Emperor Haile Selassie I. When Italy objected to allowing Germany to annex Austria Hitler would send 10,000 Mauser rifles, 10 million rounds of ammunition, 3 airplanes, 30 anti-tank guns, and thousands of rounds of armor-piercing ammunition.

With these weapons and a strategy in place, the Ethiopian army was able to beat back the Italian advance for several weeks. This caused significant economic problems for Italy and had thrown nearly everything they had into a quick war that would end within a couple of months.

As a result of this Italy’s economy began to falter. In an effort to prevent this from happening Italy would begin to import German goods and resources. This was exactly what Hitler had hoped for and now that Italy was economically dependent upon Germany Hitler had the power to seek the annexation of Austria.

In 1937 Italy would enter into the Berlin-Rome Axis agreement which would allow the annexation of Austria by Germany and open the emigration of northern Italian citizens to Germany; the two things that Moussoulini feared happening only two years prior.

When Did WW2 Start?: The Italo-Ethiopian War of 1935 Demonstrated The League of Nations Was Powerless To Stop Wars Of Aggression 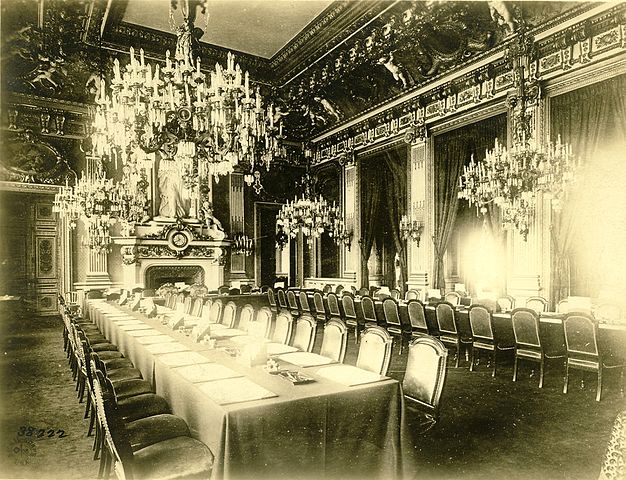 (the first meeting hall of the League of Nations, 1920, open-source, From Woodrow Wilson Presidential Library Archives.)

One of the major reasons why the 1935-1937 Italo-Ethiopian War was a major cause for World War 2 was that the conflict demonstrated to the world that the League of Nations was powerless to stop wars of aggression. This is vital because Hitler saw this and less than 3 years later Germany would march on Poland.

When Italy invaded Ethiopia in 1935 it showed the world that The League of Nations was completely powerless to stop any form of ambitious territorial aggression. This was because the new method of fighting wars was done with fast-moving armies that could easily end a war before the members of The League of Nations could impose sanctions.

On top of this many of the members of The League of Nations imposed sanctions that did hardly any harm to Italy. The first round of sanctions was created after Italy entered into Ethiopia but failed to prevent any sanctions on the international sale of oil which powered the Italian war machine. On top of this Germany and other nations simply failed to adhere to The League of Nations and continued to sell goods to Italy anyways.

This is important because it gave Hitler the pretense to first seize Czechoslovakia in 1938 and then Poland in 1939. Initially, Hitler had planned on giving Germany’s military up until 1942 to engage in a war of territorial expansion but after seeing the feeble nature of The League of Nations in 1939 Hitler invaded Poland and started World War 2.

When Did WW2 Start?: Conclusion

I hope you found this article informative and helpful in explaining just how important the Italo-Ethiopian War of 1935 was to jumpstarting World War 2.

Many people either don’t know or have forgotten about Italy’s role in destabilizing the power balance of the western world by invading Ethiopia in 1935. This invasion demonstrated the power of lighting warfare, gave Germany the ability to annex Austria, and proved to the world just how powerless the League of Nations had become. In many ways, this might answer the question of when did WW2 start.

Nicklaus Bobertz is a professional historian who runs, writes, and owns a history website called The History Ace that aims to provide easy answers to hard history questions.