When Did You Last See Your Father?

History » English Civil War » When Did You Last See Your Father? 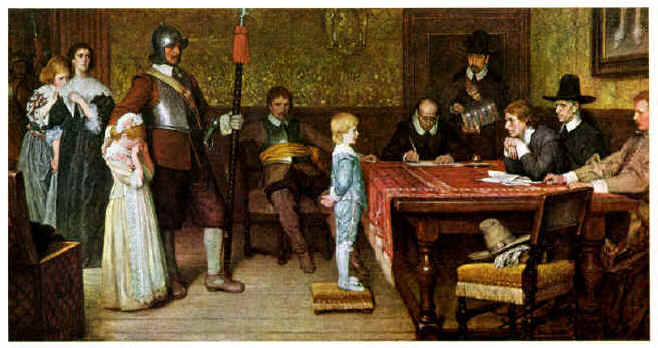 This famous nineteenth century painting by W. F. Yeames, shows a Royalist family who have been captured by the enemy. The boy is being questioned about the whereabouts of his father by a panel of Parliamentarians.

Although the picture was not painted until the nineteenth century it is a fairly valuable Secondary source about the Civil War.

We can tell from the boy’s clothes that he is a Royalist. The title of the painting is ‘And when did you last see your father?’ – so we can guess that he is being questioned as to the whereabouts of his father. Possibly his father is commander of a Royalist army and the Parliamentarians are hoping to gain knowledge of their whereabouts.

The girl is dressed in Royalist clothing so we can assume that she is the boy’s sister. She is crying, probably because she is afraid of what the soldiers might do to her family.

Two Women in the Background

We can tell by their clothes that they are Royalists. The lady at the back is hiding behind the other and seems to be more afraid. The lady in the front does not seem so afraid and is looking directly at the interrogators. The lady hiding could be an older sister and the tall lady in the front their mother.

Another possible interpretation is that the lady dressed in green is the children’s mother while the one dressed in black is a maidservant. The maidservant could have informed the Parliamentarians that the family is hiding something.

We know that this man is a sergeant because he is carrying a halberd and they were always carried by sergeants from the sixteenth to the nineteenth centuries. He is the man who has arrested the family and has brought them before the Parliamentarians for questioning.

However, he does not seem too happy with his task. The arm around the girl seems to be comforting rather than arresting and he is not looking directly at the scene in front of him. We can guess that maybe he has a family of his own and feels that questioning of children in this way is wrong.

Man on the Bench

This man is a cavalry officer. We know this because of the long riding boots that he is wearing. He is watching the interrogation of the boy with interest.

This is an important piece of evidence in this picture because it tells us the identity of the man holding it. From the sixteenth to the nineteenth century, a sergeant always carried a halberd, therefore we know that the man in the picture is the sergeant who has arrested the family.

This man is a clerk. He is writing down everything that is said. His presence also makes the scene more official as the interrogation is clearly being carried out as if it were a court case.

Man in the Corner

This man is almost hidden by the shadows in the room. However, he is looking directly at the boy and seems assured that the family is guilty. He holds in his arms a number of books, probably literature that had been forbidden by the Puritans. He seems to be happy that it is he that holds the evidence of the Royalist nature of the family and he is enjoying seeing the distress of the family.

This is the man who is questioning the boy. However, he does not seem as intimidating as the other Parliamentarians in the room. He is leaning forward with his chin resting on his hands and from his expression seems almost sympathetic towards the boy. Possibly he is tired of having to carry out such tasks and believes that the war against the King should be won on the battlefield and not through the interrogation of women and children.

Dressed in black with white collar and sitting bolt upright on the bench, this man is a typical Puritan figure. He stares at the boy with a stern expression on his face. He seems glad that another Royalist family has been discovered and probably believes that they deserve harsh punishment.

Man at the Edge of the Picture

This man, like the one in the centre of the picture, is sprawled on the bench. He is wearing a heavy looking brown coat of the type worn by cavalrymen.

He appears to be present as an onlooker rather than a member of the interrogation team. Possibly he is hoping for some information that will help his own cavalry to be victorious over the Royalists.

This leather cowboy-type of hat was worn by cavalry men during the Civil War. It looks as though it would not give much protection to the wearer, but many men wore a metal skull cap under their hats so that their heads were protected.

John Adair, in his authoritative book ‘By The Sword Divided’, states that the two children were those belonging to one Bulstrode Whitelocke of Fawley Court near Henley. Whitelocke was a lawyer of some note and it is not clear which side he supported but it is clear that his house was ransacked by the Royalists in the first instance and then sometime later by Parliament forces. The picture was painted in Victorian times and the scene being portrayed was played out very early in the conflict before any major battles had been fought and it was still fairly difficult to distinguish between the two sides.

It seems that Whitelocke was absent when the Royalists arrived and an assistant of the household removed the two children to his own house and that is where they were ‘interviewed’ by Sir Thomas Byron, a Cavalier of some rank. It is he who is depicted sitting at the table resting his chin on his hands. Although the painting portrays a somewhat threatening scene, the eye witness, Whitelocke’s assistant, Cooke, stated that no harm befell the children and certainly no harm came to Whitelocke during the course of the war.