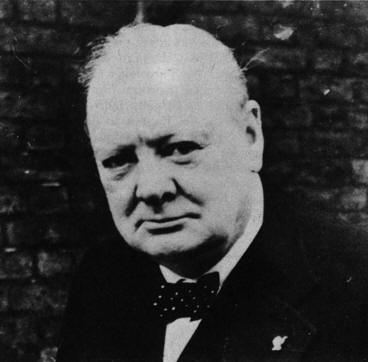 The young Winston was not a good scholar and was often punished for his poor performance. In 1888 he was sent to Harrow school where he did well in History and English. In 1893 he was accepted at Sandhurst Military College. He saw action in India and the Sudan and supplemented his pay by writing reports and articles for the Daily Telegraph. In 1899 Churchill was in South Africa working as war correspondent for the Morning Post newspaper.

In 1900 he entered politics as Conservative Member of Parliament for Oldham. However, he disagreed with his party over the issue of free trade and social reform and in 1904 became a member of the Liberal party. In the 1906 General Election he was elected as Member of Parliament for Manchester North-West. In 1908 he joined the cabinet as President of the Board of Trade and set up Labour Exchanges to help the unemployed find work. He also introduced a minimum wage.

In 1911 Churchill was appointed First Lord of the Admiralty. However, he resigned from government after taking much of the blame for the disastrous Gallipoli campaign in 1915. In July 1917 he returned to the government as Minister for Munitions and in 1919 became War Minister.

Churchill’s opposition to Indian independence, his support for Edward VIII’s abdication, his call for Britain to form an alliance with Russia and his continual warnings about the rise of Hitler and Nazi Germany led to his being seen as an extremist. However, when the Second World War broke out in 1939 Churchill returned to government as First Lord of the Admiralty. When Chamberlain resigned as Prime Minister in 1940 Churchill took his place at the head of a coalition government.

As War Prime Minister Churchill was tireless in his refusal to surrender Britain to Germany. His now famous speeches were an inspiration to British people to stand firm in the face of adversity. His strong relationship with Roosevelt led to an influx of American supplies to support the war effort. He also maintained an alliance with Stalin following Germany’s invasion of Russia in 1941.

After the war Churchill lost the 1945 election but remained as Head of the opposition Conservative government. He was re-elected Prime Minister in 1951 but resigned the position in 1955. He continued to be a Member of Parliament until 1964. He died in January 1965 and was given a state funeral.