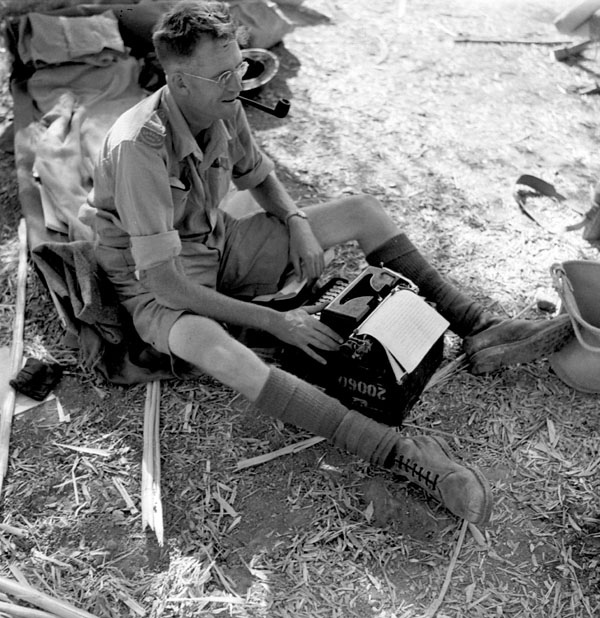 The following article on World War 2 correspondents and historians is an excerpt from Barrett Tillman’ D-Day Encyclopedia. It is available for order now from Amazon and Barnes & Noble.

The premier D-Day historian, Ambrose was often assumed to be a World War II veteran but he was only nine years old when the war ended.

He was born in Wisconsin and, following an army enlistment, earned a Ph.D. in history from the University of Wisconsin. From 1960 to 1995 he taught in the United States and in Europe. The first of Ambrose’s many books was a biography of Abraham Lincoln’s chief of staff, Gen. Henry Halleck, thus setting the stage for Ambrose’s massive production of military and political history. He gained unprecedented access to the family and papers of Dwight D. Eisenhower and wrote nine biographical volumes on the thirty-fourth president.

Ambrose was a consultant to the motion picture Saving Private Ryan and founded the National D-Day Museum in New Orleans. Continuing to write in Mississippi, he produced well-received accounts of the Lewis and Clark expedition and the construction of the transcontinental railroad.

Considered in many quarters the premier combat historian of his time, ‘‘Slam’’ Marshall ran the U.S. Army’s field history program during World War II. Subsequently he conducted detailed interviews with infantrymen in the Korean and Vietnam Wars. Though born in New York, he spent most of his life in the west, enlisting in the army in Texas in 1917.

Marshall claimed to have been the youngest U.S. Army officer in World War I, but in fact he was an engineer sergeant in France; he was not commissioned until 1919. He began his journalism career with the Detroit Free Press in 1922 and traveled extensively. He was recalled to active duty in 1942. As a colonel he oversaw the efforts of numerous field research teams, including those of Sgt. Forrest Pogue, who wrote much original material concerning D-Day.

Though widely accepted for many years following World War II, Marshall’s findings came under critical scrutiny after his death. For instance, he published figures claiming that only 15 to 25 percent of GIs actually fired their weapons during an engagement, with ‘‘prestige’’ weapons such as machine guns and automatic rifles most likely to be used. Critics held that Marshall had misrepresented the figures in order to convince the army to adopt his recommendations for a higher proportion of automatic weapons in squads, platoons, and companies.

Nevertheless, Marshall’s influence was substantial. He published some thirty books and hundreds of articles. Among his best-known books were Night Drop and The First Wave at Omaha Beach, both accounts of D-Day operations and operations from landing ships that are considered classic depictions of small-unit actions. He retired in 1960 with the rank of brigadier general and returned to his beloved Texas.

Dr. Forrest Pogue was among the premier World War 2 correspondents of his day and covered the Normandy operation under the Army Historical Section program run by S. L. A. Marshall. Despite his work toward a doctorate in history, Pogue was only a sergeant at the time of D-Day. He interviewed wounded soldiers being evacuated to England, establishing vivid first-person accounts of Operation Overlord that would be incorporated into the official history of the war. The multivolume series, The U.S. Army in World War II, was published in the decade after VJ-Day, and Pogue wrote the next to last volume, The Supreme Command, in 1954. One of Pogue’s students, Dr. Stephen E. Ambrose (D-Day, Band of Brothers, and many other volumes), described it as ‘‘a genuinely great work.’’ Among Pogue’s other works are a four-volume biography of Gen. George C. Marshall.

Pogue was curator of the George C. Marshall Research Library, director of the Eisenhower Institute for Historical Research, and a founding member of the Oral History Association. The OHA presents an award in his name for outstanding contributions to the field.

Author of the immensely popular history The Longest Day. Ryan was born in Dublin, Ireland, in 1920 and became a war correspondent in 1943. After Germany’s surrender he spent part of 1945 covering the Pacific War before returning to civilian life. He emigrated to the United States and became an American citizen in 1951.

Ryan spent a decade researching The Longest Day and was among the first authors granted access to declassified German documents. By placing ads in hundreds of periodicals in Europe and North America he gained contact with three thousand D-Day veterans, of whom seven hundred provided interviews. His eyewitness accounts mixed with strategic perspective proved a winning combination, and upon publication by Simon & Schuster in 1959 the book sold more than ten million copies in nineteenlanguages. Collaborating with Romain Gary, James Jones, and others, Ryan adapted his book for the screenplay, and producer Darryl F. Zanuck’s 1962 motion picture was a major success.

Ryan’s other World War II books included The Last Battle (1966), an account of the capture of Berlin in 1945, and A Bridge Too Far (1974), which dealt with the September 1944 Allied assault into Holland. He also wrote a biography of Gen. Douglas MacArthur and two volumes dealing with space exploration.

Decorated by the French government in 1973, Ryan saw his work critically and popularly acclaimed. He died in New York City on 23 November 1974, a victim of cancer, at age fifty-four. A 1980 television movie, A Private Battle, starred Jack Warden as Ryan.

This article on World War 2 correspondents and historians is from the book D-Day Encyclopedia, © 2014 by Barrett Tillman. Please use this data for any reference citations. To order this book, please visit its online sales page at Amazon or Barnes & Noble.