World War One – Theatres of War 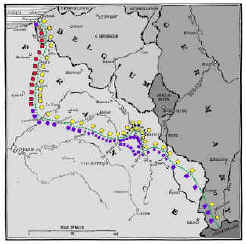 The Theatres of War of the First World War are listed in this article, particularly those on the Western Front in France, Belgium, and elsewhere. Although World War One was a world war, most of the fighting was confined to a few key areas. These areas are usually referred to as the theatres of war.

The German army crossed the Belgian border on August 3rd 1914. Britain and France declared war on Germany on August 4th. The Germans pushed through Belgium, occupying Brussels before entering France.

The British and French armies marched to stop the German advance. The Battle of Marne 4th – 10th September prevented the Germans from marching on Paris.

To avoid losing the territory already gained in France, the Germans began digging trenches. The British and French unable to break through the line of trenches, began to dig their own trenches. Throughout the entire war, neither side gained more than a few miles of ground along what became known as the Western Front.

The map above, which can be clicked to enlarge, shows the geographical position of the Western Front stretching from Belgium in the north to Switzerland in the south. Each coloured square represents 50,000 men. Yellow represents the German army, blue the French, red the British and orange the Belgian army.

Full details of all Western Front battles can be found at  http://www.firstworldwar.com/battles/wf.htm 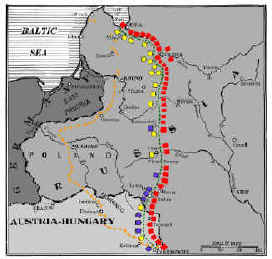 The line of fighting on the Eastern side of Europe between Russia and Germany and Austria-Hungary is known as the Eastern Front.

Fighting began on the Eastern front when Russia invaded East Prussia on 17th August 1914. Germany immediately launched a counter-offensive and pushed Russia back. This pattern of attack and counter-attack continued for the first two years of the war and meant that the Eastern Front changed position as land was captured and lost by both sides.

By 1917, the Russian people were fed up and demoralised by the huge number of Russian losses. The government and monarchy were overthrown and the new Bolshevik government signed the treaty of Brest Litovsk which took the Russians out of the war.

The map above, which can be clicked to enlarge, shows the geographical location of the Eastern front stretching from Riga in the north to Czernowitz in the south. The orange line shows the position of the Eastern Front in 1915. Each coloured square represents 50,000 men. Red represents the Russian army, yellow, German soldiers and blue Austro-Hungarian.

Full details of all eastern Front battles can be found at http://www.firstworldwar.com/battles/ef.htm 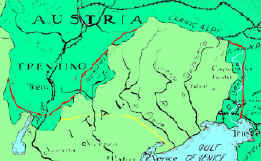 Prior to the outbreak of war in August 1914, Italy had tended to side with Germany and Austria-Hungary. To begin with, Italy kept out of the war. However, tempted by offers of more land once the war was won, Italy entered the war in April 1915 on the side of the allies.

The Italian front is the name given to the fighting that took place along the border between Italy and Austria. The Italians only managed to advance a short way into Austria (shown by the red line on the map [Click to enlarge]). Between 1915 and 1917 there were twelve battles fought along the river Isonzo. just inside the Austrian border (shown in blue on the map). After being defeated at the battle of Caporetto the Italians were pushed back. The 1918 location of the Italian front is marked on the map in yellow.

Full details of all Italian Front battles can be found at http://www.firstworldwar.com/battles/if.htm

The Gallipoli peninsula is located in the south of Turkey. In 1915, the allied commanders decided to try to attack Germany by attacking her ally, Turkey.  Allied soldiers, mainly from Australia and New Zealand, were sent to the Peninsula while British ships tried to force a way through the Dardanelles.

The entire mission was a failure. The allies lost more than 50,000 men but gained hardly any land. The map above, which can be clicked to enlarge, shows the front line. The blue line shows the allies position while the green shows the Turkish line.

Full details of all battles fought on the Gallipoli front can be found at http://www.firstworldwar.com/battles/gf.htm

The War at Sea

Even before hostilities began, Germany and Britain were involved in a naval race for mastery of the seas. Britain had a long tradition of being the master of the seas and Germany knew that she was unlikely to win a naval war against Britain. For this reason, Germany tended to avoid open naval conflict with Britain.

Britain’s main naval tactic was to keep German ships in German ports and to block supplies from reaching Germany. Germany’s main naval tactic was to post u-boats in the Atlantic ocean and to destroy ships taking supplies from America and other countries to Britain. On 7th May 1915, the passenger liner Lusitania, was torpedoed by a German submarine. Nearly 1200 civilians lost their lives.

The most notable sea battle of World War One was the Battle of Jutland between Germany and Britain, which ended inconclusively.