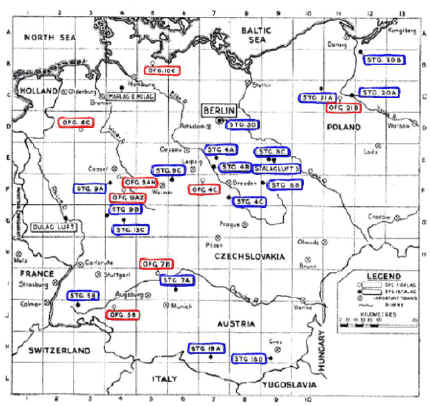 The following article on German POW camps in World War Two is an excerpt from Barrett Tillman’ D-Day Encyclopedia. It is available for order now from Amazon and Barnes & Noble.

The above map shows some of the German POW camps were located in Nazi-occupied countries during the second world war.

Oflags (ringed in red on the map) were German prison camps for officers while Stalags (ringed in blue) were for both officers and enlisted men. Some of the Stalag camps were properly named Stalag Luft, short for Stammlager Luftwaffe. They were run by the Luftwaffe and were initially intended to house airforce prisoners. There were also camps known as Marlags, short for the German Marinelager, which were for captured naval servicemen.

Before being sent to a camp, a captured prisoner of war had to pass through a Dulag, short for the German Durchgangslager. These were transit camps where details of the prisoners were processed and they were interrogated. Under the terms of the Geneva Convention prisoners only had to give details of their name, rank and serial number but interrogating officers often tried to trick captured servicemen into giving away more information through clever questioning. 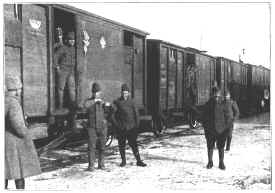 Prisoners would then be transported to a prisoner of war camp. The usual form of transport was by train and the length of the journey depended on both the distance to travel and the number of times the train would be shunted into a siding to make way for a passing troop train.

At intervals the train would stop and all the prisoners would be expected to get out of the train to either relieve themselves or empty their bowels by the side of the track.

Individual camp layouts varied from camp to camp, but all were enclosed with barbed wire and contained guard towers which were manned by armed German soldiers ready to shoot anyone trying to escape. Prisoners were usually housed in one-storey wooden barracks which contained bunk beds (two or three high) and a charcoal burning stove in the middle of the room.

Prisoners were generally given two meals a day – thin soup and black bread. Needless to say hunger was a feature of most prisoners’ lives. All prisoners looked forward to deliveries of Red Cross food parcels which contained ‘luxury’ items such as butter, biscuits, chocolate and condensed milk as well as dried fruits and vegetables. Prisoners often improvised their own brick stoves and cooked their food in empty milk tins.

Daily routine varied from camp to camp but all prisoners would be expected to parade at least once daily for a roll-call. Some men would be put to work either around the camp or in the locality. A range of sports were played when the weather was fine and in the evenings there were sometimes concerts. However, for most, the overriding features of life in a prisoner of war camp were boredom, hunger and dreams of a better life once the war was over.

This article on German POW camps is from the book D-Day Encyclopedia, © 2014 by Barrett Tillman. Please use this data for any reference citations. To order this book, please visit its online sales page at Amazon or Barnes & Noble.