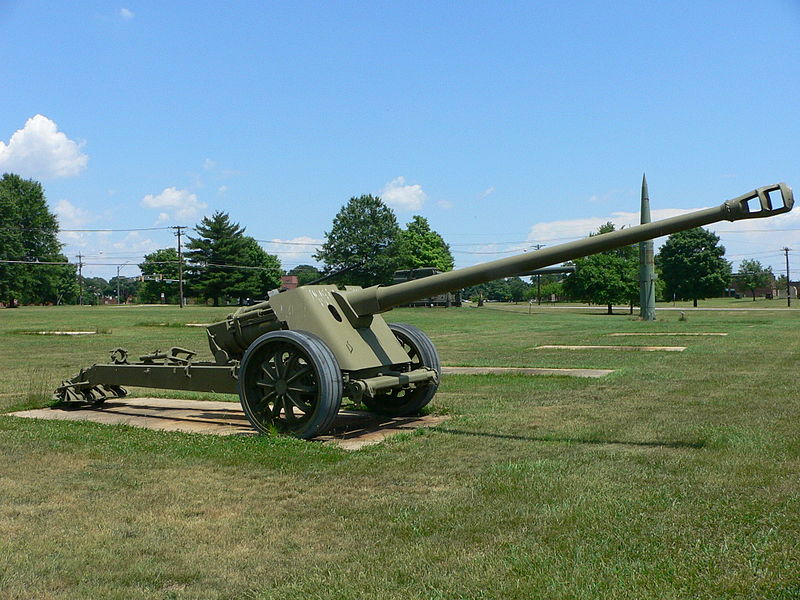 The following article on WW2 artillery is an excerpt from Barrett Tillman’ D-Day Encyclopedia. It is available for order now from Amazon and Barnes & Noble.

There are two types of artillery: guns and howitzers. A howitzer combines the power of a gun with the high or low trajectory of a mortar, usually at moderate velocities. An alternate definition is a tube length between twenty and thirty calibers—a four-inch-diameter weapon with a barrel measuring eighty to 120 inches. Conversely, a gun is a cannon with a barrel of thirty calibers or more, firing a high-velocity round at fairly low angles.

Artillery usually was towed in the Second World War but also was self-propelled, especially in armored formations requiring artillery to advance with the tanks.

U.S. infantry divisions had substantial artillery support—four batteries, each with twelve tubes. Three batteries had 105 mm howitzers and one with 155 mm guns. By D+4 (i.e., the fourth day after D-Day), the U.S. Army had 624 towed or self-propelled artillery pieces ashore.

Airborne forces needed small, portable artillery to offset their firepower disadvantage, and the pack howitzer met the need. Fielded in 1927, the M1A1’s four-man crew could assemble the weapon from eight parts in a few minutes. Two Waco gliders needed to carry the pack howitzer with a jeep and trailer, while Britain’s larger Horsas could deliver the gun, transport, and crew intact. The assembled piece weighed 1,300 to 1,400 pounds, firing to ranges beyond nine thousand yards.

The M2 howitzer was based on a 1920s design that was introduced to service in 1934. Weighing 2.3 tons, it was served by a six-man crew and proved uncommonly versatile. It fired a four-inch, thirty-five-pound shell about nine miles with high explosive, antitank, white phosphorous, chemical, or illumination rounds. Some 105s were fired from their landing craft while approaching Omaha and Utah beaches on D-Day.

Introduced in the summer of 1941, the M1 Howitzer replaced the

M1918 six-inch weapon. The M1A1 and M2 ‘‘Long Toms’’ were far more capable than the previous weapon, especially in range. The carriage was designed for improved mobility, and, with an eleven-man crew, it provided a much-needed improvement in division artillery. The howitzer weighed 5.4 tons and fired a 108-pound shell almost seven miles. High explosive, white phosphorous, and chemical rounds were produced.

A self-propelled 155 vehicle, the M12, was delivered to Normandy and proved particularly valuable to armored divisions, which naturally advanced faster than infantry units. The gun was the M1917/1918 on an M-3 Stuart light tank chassis.

This article on WW2 artillery is from the book D-Day Encyclopedia, © 2014 by Barrett Tillman. Please use this data for any reference citations. To order this book, please visit its online sales page at Amazon or Barnes & Noble.