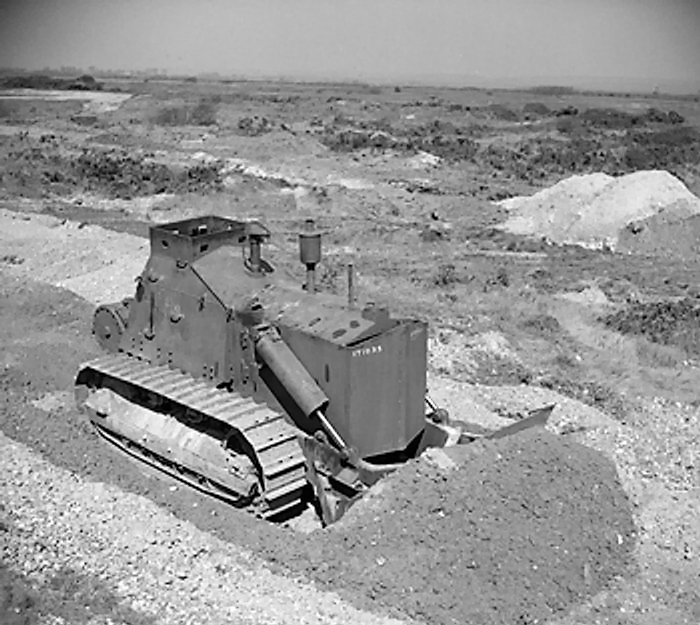 The following article on WW2 vehicles is an excerpt from Barrett Tillman’ D-Day Encyclopedia. It is available for order now from Amazon and Barnes & Noble.

This article focuses on WW2 vehicles used by Americans, the British, and Germans. The types of vehicles varied greatly on the theatre of war and particular battle conditions. To simplify this list, vehicles that appear at D-Day are given primary focus.

The U.S. Army’s acronym for the amphibious truck (DUKW) was pronounced ‘‘Duck,’’ which was appropriate for a waterborne craft equally at home on land. The name was derived from the manufacturer’s designators D (model year 1942), U (amphibious), K (all-wheel drive), and W (dual rear axles). The Duck was based on a standard two-and-a-half-ton truck chassis with six wheels and could make five and a half knots in water but upward of 50 mph ashore. With all-wheel drive for its three axles it had excellent traction, making it a desirable cross-country vehicle. It could deliver between twenty-five and fifty troops or five thousand pounds of cargo. First employed in Operation Husky, the invasion of Sicily in July 1943, DUKWs were a mainstay of U.S. Army amphibious operations, including the invasion of Italy and Normandy. Some twenty-one thousand were manufactured throughout the war.

Normally four bulldozers were allotted to each U.S. infantry division, but more were provided for Overlord. Even then, very few got ashore in time to help—just three of sixteen at Omaha Beach. The difficulty of unloading the heavy vehicles in deep water proved more of a problem than did enemy action. However, those that did survive unloading and German fire proved extremely useful. They removed obstacles and bladed clear paths for other vehicles across the dunes leading inland. After the beachhead was secure, bulldozers were constantly in use by engineers to improve roads and construct advanced airfields. General Eisenhower considered bulldozers so important that he listed them as one of the significant weapons of the European campaign. Bulldozer blades also were affixed to Sherman tanks.

The halftrack was a hybrid, a lightly armored vehicle with front wheels and a tread in the rear. Its mobility and cross-country capability made it ideal for mechanized infantry, though halftracks also were adapted for light artillery and antiaircraft use.

The most iconic of American WW2 vehicles. Officially the jeep was a quarter-ton truck, but its versatility exceeded that designation. Easily the most famous vehicle of World War II, the jeep derived its name from the acronym for GP (general purpose) vehicle.

When the German army overran Western Europe in 1940, the importance of mechanized transport became apparent to the United States. Consequently, the U.S. Army issued a seemingly impossible request to 135 companies: produce a prototype quarter-ton light truck in forty-nine days. Only two firms responded—American Bantam and Willys-Overland. The Bantam prototype was rolled out on 21 September 1940, followed by Willys and a belated Ford entry. Willys’s exceptional engine produced 105 foot-pounds of torque compared to eighty-five for the Ford, while Bantam’s design was overweight. The army ordered 1,500 examples from Willys and Ford with deliveries commencing in the spring of 1941. As a consolation, Bantam was given the contract for building the trailer designed to be towed by jeeps.

The jeep was ten feet, nine inches in length and had an eighty-inch wheel-base; its ground clearance was not quite nine inches. The heart of the rugged little vehicle was a four-cylinder, 55 hp engine that yielded a surprising twenty miles per gallon fully loaded. It became a four-wheeldrive, light truck capable of carrying five soldiers, eight hundred pounds of cargo, or towing a 37 mm antitank gun.

Over the next four years an incredible 640,000 jeeps were built, 56 percent by Ford, which received a production license from Willys. Nearly onethird of all jeeps went to the British or Soviets, while typically 149 were issued to every U.S. Army infantry regiment. Jeeps were used in every theater of war for reconnaissance, casualty evacuation, resupply, and all manner of support roles. The four-wheel-drive feature combined with the engine’s torque enabled the jeep to traverse seemingly unpassable terrain, whether steep hills, rutted ravines, or muddy quagmires.

Airborne units especially appreciated jeeps, as the quarter-ton trucks fit in gliders and provided both reconnaissance and much-needed transport behind enemy lines. In 1944 infantry glider regiments had twenty-four jeeps, and parachute regiments had seventeen. Armament usually consisted of a pedestal-mounted .30 or .50 caliber machine gun.

The U.S. Army possessed an enormous number and variety of motor transport. Among the more typical were:

A half-ton, four-by-four vehicle made by Dodge, the command car carried a driver and four passengers. Empty weight was 4,600 pounds, but a thousand pounds of payload brought operating weight to 5,600. With a six-cylinder engine it was capable of 56 mph; nominal range was three hundred miles.

A Dodge design from Chrysler Corporation, the half-ton weapons carrier was a versatile machine. With an empty weight of 4,200 pounds, it carried a half ton of equipment or personnel. Its four-wheel-drive capability enabled it to ford a stream nearly three feet deep, and the six-cylinder engine drove it at 55 mph.

Though shorter than the half-ton carrier, the Dodge three-quarter-ton vehicle delivered 50 percent more weapons, troops, or equipment. Its performance was comparable, reaching 54 mph with a 240-mile range. Both types of carriers were often equipped with a powerful winch capable of towing a five-thousand-pound load.

Several general-purpose trucks delivered troops, fuel, food, ammunition, and other supplies during the Normandy campaign. Smallest were the one-and-a-half-ton variety from Chevrolet, Dodge, and Ford, with a basic weight of 7,550 pounds and a three-thousand-pound capacity. They were two-axle vehicles with six-cylinder, 83 hp engines capable of 48 mph with a 270-mile cruising range.

A three-axle Dodge was a useful six-by-six that could ford nearly three feet of water. Its empty weight of 6,900 pounds transported a ton and a half of cargo almost 250 miles, reaching top speeds of 54 mph. The in-line sixcylinder engine was rated at ninety-two horsepower.

Perhaps the most famous category of military trucks was the ‘‘deuce and a half,’’ built in at least three basic models, with a five-thousand-pound capacity. There were two- and three-axle chassis with a basic weight of 7,300 pounds and ten thousand pounds, respectively. The latter were six-by-four and six-by-six models with good cross-country capability and road speeds of 45 mph. Range varied between 230 and three hundred miles. Manufacturers included General Motors, Studebaker, International Harvester, and Mack. Some four hundred thousand such vehicles were shipped to Russia, helping make the Red Army more mobile than the Wehrmacht.

Four-ton trucks were two-axle models from Four-Wheel Drive Company and three-axle from Diamond T. The four-by-four version weighed 11,400 pounds empty, the six-by-six 18,400. They transported eight thousand pounds at 35 to 40 mph on roads, though the smaller vehicle possessed greater range—220 miles compared to 180. About one-quarter of the Diamond T versions were built with M36 ‘‘sky mounts’’ for .50 caliber machine guns as antiaircraft defense.

Large, three-axle trucks needed to tow heavy artillery and similar objects were called ‘‘prime movers.’’ The U.S. Army had two basic models: a six-ton vehicle from Brockway, Corbitt, Mack, and White; and a seven-and-one-half ton truck from Mack. Both were six-by-sixes; the former a general-purpose vehicle weighing twenty-two thousand pounds, while the latter was 29,600 pounds empty, used for towing 155 mm and 240 mm artillery pieces. Both were capable of 30 to 35 mph without a load.

The Bren Gun Carrier is perhaps most iconic of British WW2 vehicles.

Despite the name, the Bren gun carrier was not specifically designed to carry a Bren gun and crew. Designated the British Universal Carrier (BUC), it was a tracked general-purpose vehicle capable of 35 mph on open ground. The BUC normally had a two-man crew—commander and driver—but the V-8 engine was so loud that communication was nearly impossible. Its lightly armored, open body design permitted easy access and could accept a variety of loads, including a two-inch mortar or light antitank weapons. It also served as a troop transport and command vehicle with three passengers besides the crew. The carrier could tow a 37 mm antitank gun or a trailer. Production was expanded to Canada, Australia, and the United States.

A Bren gun carrier appears in The Longest Day—the beachmaster (Kenneth More) pounds the vehicle into life with his shillelagh.

Roughly equivalent to the U.S. Jeep among German variants of WW2 vehicles but not as versatile, the Kurbelwagen was developed from the Volkswagen ‘‘people’s car’’ with a four-seat capacity and convertible top. The rear-mounted, air-cooled engine produced 24.5 hp, which yielded about 50 mph on level ground. Its two-wheel drive pre- vented any similarity in cross-country performance with the Jeep, though a Schwimmwagen amphibious version was produced. Maj. Werner Pluskat (Hans-Christian Blech) of the 352d Division is strafed in a Kurbelwagen in The Longest Day.

The Germans pioneered the class of military vehicles known as ‘‘armored personnel carriers.’’ Beginning in 1939, the one-ton Sd. Kfz. 250 was followed by the three-ton Sd. Kfz. 251, which also accepted a 37 mm antitank or 20 mm antiaircraft gun. Built with light protection (usually six to fifteen millimeters), they possessed unusually good defensive qualities, owing to the sloped armor. Probably the most common version in Normandy was the 251D, produced from 1943 onward. It was capable of some 30 mph on roads with 180-mile range.

Apart from carrying panzer grenadiers into action, halftracks were enormously versatile. Among other missions, they functioned as command vehicles, communication platforms, ammunition carriers, and battlefield ambulances. According to various sources, from fifteen to sixteen thousand or more German halftracks were built during the war. At least five manufacturers were involved, including Auto Union, Maybach, and Norddeutsche.

Like the Allies, the Germans produced a variety of military trucks including, ironically, American designs.

The Opel Blitz was a three-ton general-purpose vehicle with several specialized bodies. The 3.6 series chassis was basically a Chevrolet commercial type with a 3.6-liter water-cooled six-cylinder engine of about sixty-eight horsepower. A four-wheel-drive version was designated Type 6700.

Ford designs were the basis of the three-ton capacity G917 and G997 models, with 78 hp V-8 water-cooled engines. The latter, with a larger bore, had a 3.9-liter engine. Both were two-wheel drive.

Another three-ton model was the Mercedes Benz LCF 3000, with a fiveliter, four-cylinder diesel. The transmission afforded four forward speeds and one reverse; an auxiliary gearbox permitted road or cross-country gear ratios. However, the two-wheel-drive design limited off-road use.

Perhaps the most useful German truck was the Bussing-NAG diesel, rated at four and one-half tons capacity. American tests of captured examples demonstrated an average road speed of 21 mph in traffic, with fuel mileage of better than eight miles per gallon. Most notably, the Bussing accepted loads of six and three-quarter tons without difficulty.

The German army designated its heaviest vehicles as prime movers, generally for towing the largest mobile artillery pieces. Probably the most common were eight-ton medium halftracks from Hansa-Lloyd and KM, appearing in 1935 and 1939. Three, five, and twelve-ton models also were produced.

This article on WW2 Vehicles is from the book D-Day Encyclopedia, © 2014 by Barrett Tillman. Please use this data for any reference citations. To order this book, please visit its online sales page at Amazon or Barnes & Noble.