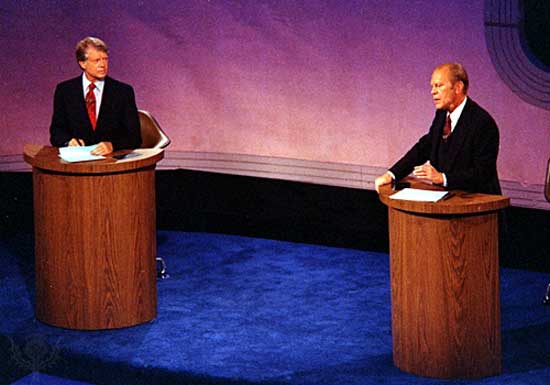 The 1976 presidential election was the first held in the wake of the Watergate scandal, which had consumed the Nixon presidency and resulted in Gerald R. Ford becoming president. Ford had first become Vice President by congressional confirmation in the wake of Vice President Spiro Agnew’s own corruption scandal and resignation, resutling in the first American president who had not been elected to be either president or vice president. Ford, the Republican candidate, was pitted against the relatively unknown former 1-term governor of Georgia, Jimmy Carter. Carter ran as a Washington outsider, a popular position in the post-Watergate era, and won a narrow victory.

With no clear front-runner in the field and the Republicans obviously vulnerable, no less than 12 candidates vied for the Democratic Party’s nomination. However, this was the first election featuring the new primary system, and many candidates failed to understand the importance of building momentum early in the contest. As a result, many candidates dropped out early. Jimmy Carter did recognize the importance of the primaries, and was determined to compete in each of them. He traveled over 50,000 miles, visited 37 states, and delivered 200 speeches before any other candidates annouced they were in the race. Additionally, Carter benefited from largely positive media coverage. Experts were surprised when Carter finshed 2nd in the Iowa caucuses (finishing second to “uncommitted”). Carter then proved that a southerner could win up North by winning New Hampshire. Carter benefitted when liberal Democrats split their vote among the other candidates.

Carter defeated fellow Southerner George Wallace in the North Carolina primary, knocking out his main rival. When Carter knocked out Senator Henry “Scoop” Jackson in Pennsylvania and Arizona Congressman Morris Udll in Wisconsin, liberal Democrats formed the “ABC” movement (Anybody But Carter). Led by Idaho Senator Frank Church and California Governor Jerry Brown, the ABC movement defeated Carter in several late primaries, but this challenge came too late to prevent Carter from garnering enough delegates for the nomination. The party came together at the convention in New York, in July, where Congresswoman Barbara Jordan became the first African American to deliver the keynote address at a major political convention. The Democrats arrived at the convention determined to begin the general campaign united and strong. Carter won easily on the first ballot, and chose liberal Senator walter Mondale of Minnesota as his running mate.

Incumbent Gerald Ford faced a strong primary challenge from California Governor Ronald Reagan, who represented the conservative wing of the party. It was the last Republican convention in which a candidate had not been chosen by the start of the party convention. Ford has previously announced that he would not seek the 1976 nomination, but changed his mind before the start of the primary season. Ford had been the recipient of much goodwill from congress and the American people at the time of Nixon’s resignation, but that honeymoon period had ended quickly following Ford’s decision to pardon Nixon. Ford spent much of his presidency battling the Democratic-controlled congress and the country’s economic woes, both with minimal success. Reagan and the conservatives faulted Ford for failing to do more to help South Vietnam, which finally collapsed in April 1975, for moving forward with Detente, despite obvious advantages it afford the Soviets, and for negotiating with Panama to turn over the Panama Canal (an agreement on which was made during the subsequent Carter administration).

Ford defied expectations by winning the New Hampshire primary, then proceeded to beat Reagan in Florida and Illinois. Reagan was almost out of money when the conservative machine helped Reagan to victory in North Carolina, re-energizing the campaign. Reagan then won a string of impressive victories, including Texas, but Ford rebounded by winning his native Michigan. For the rest of the increasingly bitter primary season, no clear winner emerged, though Ford arrived at the convention in Kansas City with a slim margin in delegates.

During the political maneuvering at the convention, Reagan made a gaffe by announcing that, should he be nominated, moderate Senator Richard Schweiker of Pennsylvania would be his running mate. This announcement was calculated to win over moderates, but instead it outraged Conservatives. Mississippi, the convention swing state, switched to Ford on the first ballot, narrowly pushing him past the 1130 delegate threshold needed to win. Ford picked Senator Robert Dole of Kanas as his running mate. After giving his acceptance speech, Ford asked Reagan to come and say a few words to the convention. Instead of a few words, Reagan gave an eloquent address which overshadowed Ford’s performance and foreshadowed what was to come four years later.

The General ElectionCarter’s Strategy: Jimmy Carter’s campaign was folksy and hokey, with Carter embracing the image of the rural hick in a strategy calculated to portray himself as the quintessential Washington outsider. Carter’s campaign headquarters was an old train depot in his hometown of Plains, Georgia. The former governor, a peanut farmer, used peanut imagery to emphasize his working man background, and he proposed a religous salve for the nation’s wounds. In the South, he emphasized his potential to be the first Southern Democrat to win the White House since before the Civil War.

Ford’s Strategy: President Ford took advantage of the nation’s Bicentennial celebration and campaigned from the White House until October, using state dinners for Queen Elizabeth II and Prince Philip as backdrops for a “Rose Garden” strategy of presenting the President as a “tested leader.” Ford was able to transer this image into a negative for Carter, successfully characterizing the former Governor as too inexperienced. However, Ford’s refusal to further explain his decision to pardon Richard Nixon kept many voters from supporting him. He would do so in a memoir shortly after the end of his career, and many Americans who opposed the pardon now see the decision as the correct one, but in 1976 there was palpable anger and distrust that translated into votes for Carter. Ford’s sour relationship with Congress and the country’s dogged economic woes also played a large role in detracting from the President’s poll numbers. Earlier in the year the President’s popularity had suffered from his role in a national health crisis. For the first time, the influenza strain H1N1 had crossed over from pigs to humans. An army recruit at Fort Dix died and four others were hospitalized, all of thm diagnosed with “swine flu.” Soon thereafter, the Ford administration urged that every person in the United States be vaccinated. However, the vaccine was delayed, and by the time it was ready, the crisis had largely subsized. Nevertheless, some 25% of the public was vaccinated, causing 25 deaths–more than had died from the flu itself. In the general election, conservatives continued to find it difficult to support Ford. On social issues, they were aghast at his support of the Equal Rights Amendment, and his wife’s public pro-choice stance on abortion.

President Ford also suffered from an image problem. Despite being one of the most accomplished athletes in Presidential history, Ford was caught on camera several times falling down, and up, the steps of Airforce One. These public gaffes coincided with the debut of Saturday Night Live on NBC, which quickly mined the President for comedic gold. The show first mocked the President during the “weekend update” news segment, but soon comedian Chevy Chase began to play the President. The running gag was for Chase to end each skit by falling in some exaggerated way. Additionally, Chase’s impression of Ford depicted the President as exceptionally stupid, a reputation that dogged Ford going back to Lyndon B. Johnson’s famous retort that Ford could fart and chew gum at the same time. Although it’s difficult to assess how this image problem played into the election, it seems likely that Saturday Night Live had some impact on what was to be a very close election.

Following the Democratic National Convention, Carter polled ahead of Ford by 33 points. However, the race tightened as the campaign continued. Along the way, candidate Carter gave an interview with Playboy Magazine, and the magazine published that interview that fall. In the context of Carter explaining his religious views, the former governor explained why he believed it wrong to parse degrees of sinfullness. He argued that a married man who has lusted after women has sinned just as the man who has physically committed adultery. Carter said, “I’ve looked on a lot of women with lust. I’ve committed adultery in my heart many times.” Therefore, he argued, he was not in a position to condemn the guy who “screws a whole bunch of women.” The main media headline from this exchange was the admission that the religious Carter had lusted in his heart for women. The nation in general felt a certain degree of discomfort about the interview, but conservatives and women were especially disconcerted. Carter’s lead in the polls evaporated.

1976 saw the return of televised debates, the first since 1960. Ford performed well during the first debate on September 23, but during the second debate on October 6, he made a serious gaffe by asserting that “there is no Soviet domination of Eastern Europe and there never will be under a Ford administration.” when pressed by the incredulous moderator, Ford went on to claim that the Poles, Yugoslavs, and Romanians did not consider themselves dominated by the Soviet Union.” What Ford likely meant to say was that the people in those countries did not accept the Iron Curtain, but Ford phrased his response in such a way as to claim that there was no Iron Curtain. Instead of immediately explaining his response, Ford stubbornly stuck to his statement for almost a week after the debate. Neo-conservatives were appalled at Ford’s response, as well has his pledge to pardon all Vietnam War draft dodgers.

Saturday Night Live parodied the debates, with Ford getting the worst of it. In the SNL skit, which aired on October 16, Carter was asked about his interview with Playboy magazine. Six day’s later, Carter was asked such a question in the 3rd and final debate. and many felt the governor handled the question well. Ford’s rise in the polls stalled, and Carter was able to maintain a slight lead. A vice-presidential debate between Republican Bob Dole and Democrat Walter Mondale also hurt the Republican ticket when Dole claimed that all of the wars of the 20th Century were attributable to unpreparedness caused by Democratic administrations. Dole claimed that the number of casualties in these “Democratic Wars” was equal to the population of Detroit. Many Americans found Dole’s criticism to be unfairly harsh.

Ford’s image was refurbished a bit by some late campaign ads and appearances he made with retired St. Louis Cardinals baseball star turned NBC sports announcer Joe Garagiola, Sr. By election day, the campaigns were judged to be about even. The election was held on November 2, and it took until about 3:30 for the networks to start calling the election for Carter. The former governor won the electoral vote with 297 votes (27 more than needed), and he won the popular vote by two percent. Ford won 27 states, the most that any losing candidate has ever won.