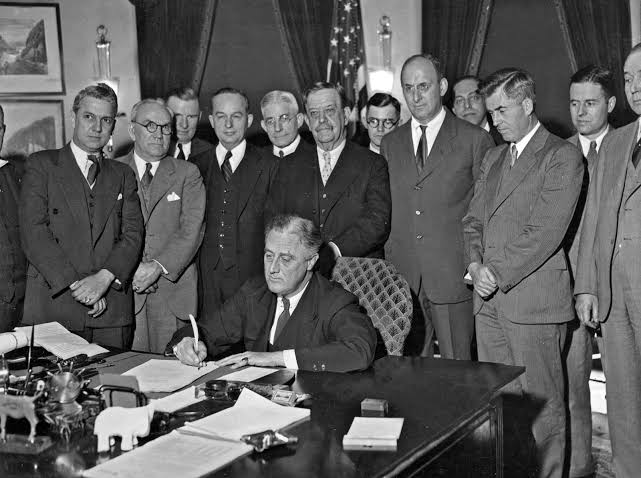 The Agricultural Adjustment Administration was a key feature of the New Deal. FDR proposed to pay farmers for cutting back on production or producing nothing at all. The decrease in supply, he believed, would raise farm prices. But in the meantime, he had to deal with the existing bounty. The administration decided to destroy much of what had already been produced to create a shortage and thereby raise farm prices. Six million pigs were slaughtered and ten million acres of cotton were destroyed.

Agriculture Secretary Henry Wallace described the wholesale destruction of crops and livestock as “a cleaning up of the wreckage from the old days of unbalanced production.” Wallace, of course, had special insight into precisely what quantity of production would bring things into “balance.”

Shortly after the Agricultural Adjustment Act (AAA) was passed, the Department of Agriculture released the findings of its study of the American diet during these difficult years. The study constructed four sample diets: liberal, moderate, minimum, and emergency (below subsistence). It found that America was not producing enough food to sustain its population at the minimum (subsistence) diet. It took a special kind of mind to conclude that the best approach to this disaster would be to make food more expensive.

Meanwhile, the evidence proving that FDR’s approach was fundamentally flawed continued to mount. In 1936, the Bureau of Agricultural Economics reported that in the case of cotton, farm income would have been at least as high and perhaps even higher in the absence of the AAA. The following month, Cornell University’s James E. Boyle argued in the Atlantic that the AAA had been responsible for the joblessness of at least two million Americans, especially sharecroppers and farm laborers. And although the AAA was intended to increase farm income, historian Jim Powell observes that farmers “actually found themselves worse off because FDR’s National Recovery Administration had been even more successful in forcing up the prices that consumers, including farmers, had to pay for manufactured goods.”

A similar program was the National Industrial Recovery Act (NIRA), which established the National Recovery Administration, was an enormous contradiction. On the one hand, it sought to keep wage rates high to give the consumer greater “purchasing power.” On the other hand, it established hundreds of legally sanctioned, industry-wide cartels that were allowed to establish standard wages, hours of operation, and minimum prices. The minimum prices meant that businesses would be largely prevented from underselling each other; everyone’s price had to be at least the prescribed minimum. The artificially high wages meant continuing unemployment, and the high prices meant hardship for nearly all Americans. Some strategy for recovery.