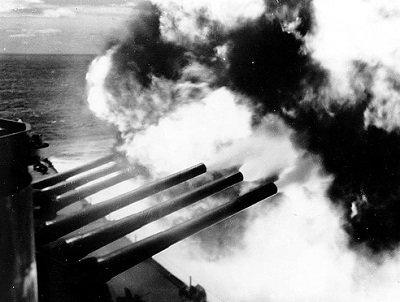 The following article on the Battle of Guadalcanal is an excerpt from Barrett Tillman’s book On Wave and Wing: The 100 Year Quest to Perfect the Aircraft Carrier. It is available to order now at Amazon and Barnes & Noble.

Only sixty days after the Battle of Midway—in which Allied forces in the Pacific inflicted irreparable damage on the Japanese naval fleet in June of 1942—the strategic balance shifted in America’s favor. Following six months of playing defense, the Pacific Fleet launched the nation’s first offensive of the Second World War. It occurred in an obscure part of the world few people had ever heard of.

Guadalcanal was the largest of the Solomon Islands, nearly eight hundred statute miles east of New Guinea and bordering the sea lanes from Hawaii to Australia. Japan had already recognized the island’s worth, building a seaplane base at Tulagi, scene of the precursor to Coral Sea in May. Now, with an airfield on Guadal’s northern plain, the island was an obvious choice for conquest. The First Marine Division was assigned the task, with air cover from Enterprise, newly repaired Saratoga, and Wasp transferred from the Atlantic.

Battle of Guadalcanal: By Land and By Sea

Combat continued the next day, and while Japanese losses exceeded American, Fletcher was concerned about his dwindling air strength. Additionally, the Marines were slow to unload the transports, exposing the precious flattops to greater danger. Fletcher asked permission of the theater command to pull out of range, and received it. While the Marines viciously condemned his action, clearly it was prudent. Hornet was the only other fleet carrier, and America would have no new flight decks until the following summer.

Meanwhile, Japanese surface forces intervened. Though outnumbered two to one, on the night of August 8–9, a powerful IJN cruiser force drubbed the American-Australian warships around Savo Island north of Guadalcanal. Four Allied cruisers were lost, leaving the transports wholly vulnerable. They had no choice but to hoist anchor and depart, still not fully unloaded.

The leathernecks ashore endured frequent bombing for several days until Marine squadrons arrived. On August 20 Wildcats and Dauntlesses landed at Henderson Field—named for the Marine dive bomber who died at Midway—delivered by the escort carrier Long Island.

The timing favored Japan. Fletcher, commanding Task Force Sixty-One, had detached Wasp for refueling when the crisis broke, again forcing him to fight outnumbered. Nonetheless, Enterprise and Saratoga turned toward the threat, their 154 tailhook planes opposing about 175 Japanese.

Throughout the late summer and the fall, the Japanese made many attempts to retake Henderson Field. In November their last attempt to bombard Henderson Field from the sea and land was defeated. They abandoned their efforts to retake Guadalcanal in December and evacuated remaining forces in February 7, 1943.

The Allies won the Battle of Guadalcanal, which has been called the turning point in the war against Japan.

This article on the Battle of Guadalcanal is an excerpt from Barrett Tillman’s book On Wave and Wing: The 100 Year Quest to Perfect the Aircraft Carrier. It is available to order now at Amazon and Barnes & Noble.