Battle of Okinawa: AKA Operation Iceberg 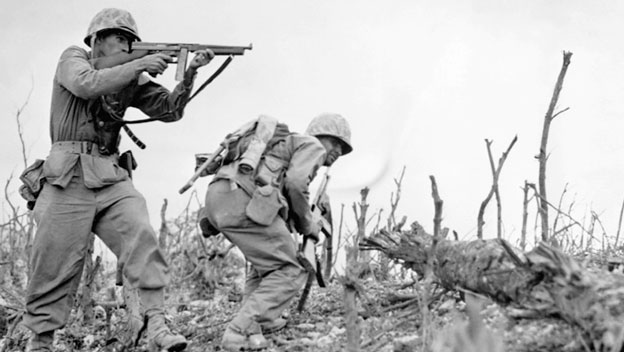 The following article on the Battle of Okinawa is an excerpt from Barrett Tillman’s book On Wave and Wing: The 100 Year Quest to Perfect the Aircraft Carrier. It is available to order now at Amazon and Barnes & Noble.

Operation Iceberg—the code name for the Battle of Okinawa and the occupation of the Ryukyu Islands—began on April 1, 1945. It was not only April Fool’s Day, it was also Easter Sunday. The northern portion of Okinawa lay only four hundred statute miles from Kyushu, and Iceberg was certain to draw a furious response.

The Battle of Okinawa shaped up as the penultimate battle of the Pacific War— the last step before Japan itself. Defended by about seventy thousand Japanese troops plus thousands of conscripted Okinawans, the islands were assaulted by the U.S. Tenth Army comprised of seven Army and Marine Corps divisions totaling some 180,000 men, plus reserves and support units.

To support Iceberg, the carriers had to remain in a limited area, usually no more than one hundred miles offshore. That requirement solved the enemy’s main problem—locating his target. For two months the fast carriers, ably assisted by the CVEs, fought a continuous battle against conventional and suicide air raids in addition to flying ground support missions for U.S. infantry.

The carrier airmen brought enormous power to Okinawa, with more than one thousand planes in Mitscher’s force, plus two hundred more in four British ships. As before, the fast carriers operated round the clock. Enterprise remained the sole night owl at the time among fourteen other U.S. carriers deployed in four task groups, with more ships on the way.

But there had also never been anything like Japan’s Special Attack Corps. The Kamikaze hatcheries spawned an unrelenting stream of suiciders that winged southward from their Kyushu nests. However, Japanese response on the first two days was surprisingly light: carrier pilots only splashed ten hostiles each day. Activity jumped on April 3, with nearly fifty shootdowns. Far worse was yet to come.

Between early April and June 21, the Special Attack Corps lofted more than 1,400 “Floating Chrysanthemums” in ten waves. By sheer numbers they broke through the Hellcat, Corsair, and Wildcat pickets to sink thirty ships and damage more than ten times that number, with some five thousand sailors killed. The U.S. Navy had never absorbed so many fatalities as it did in the Battle of Okinawa, but off Okinawa and Kyushu the fast carriers proved “the fleet that came to stay.”