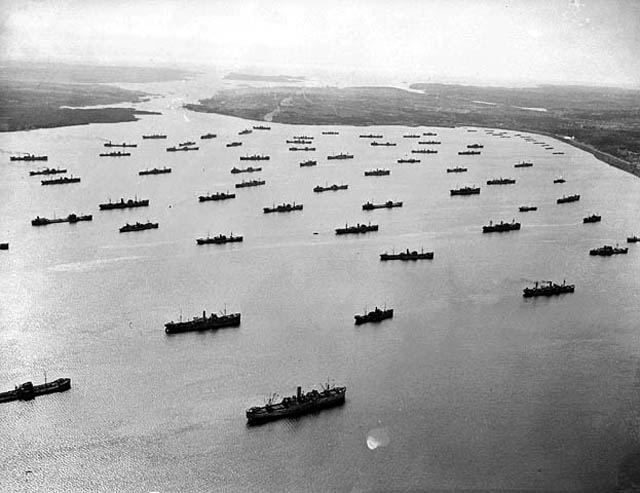 The following article on the Battle of the Atlantic is an excerpt from The Hunt for Hitler’s Warship © 2015 by Patrick Bishop. It is available now from Amazon or Barnes & Noble.

The Battle of the Atlantic existed throughout nearly all the duration of World War Two—running from 1939 to 1945 and consisting of the Allied naval blockage of Germany and Germany’s counter-blockade of convoys from North America to the United Kingdom and the Soviet Union. U-Boats and warships frequently clashed.

In late 1940 England was pummeled by German bombers in a major air campaign known as the Battle of Britain. The relief of surviving the Battle of Britain had given way to the bleak realization that the nation was isolated and faced immense difficulties ahead. The country was now engaged in another struggle for existence, which Churchill christened the Battle of the Atlantic. Having failed to bring Britain to terms by the threat of invasion, Germany had switched its strategy and was trying to starve her into submission by cutting off the lifelines that connected her with the rest of the world. Churchill said later that “amid the torrent of violent events one anxiety reigned supreme . . . dominating all our power to carry on the war, or even keep ourselves alive, lay mastery of the ocean routes and the free approach and entry to our ports.”

It was the navy’s principal duty to defend these routes but the task was overwhelming. It no longer had the resources of the French fleet, a large part of which lay at the bottom of Mers-el- Kebir harbor, sunk by British guns. America gave all the help it could, but it had yet to enter the war. Early engagements in the battle for Norway and on the high seas had failed to neutralize the threat from the German navy. Instead, in the spring of 1941, the Kriegsmarine was setting the pace in the struggle.

The Battle of the Atlantic: Freeing Up Vital Sea Lanes

The main battleground of the Battle of the Atlantic was the vital sea lanes of the North Atlantic. In March and April 1941, nearly half a million tons of Allied shipping had been sent to the bottom. Most of it was sunk by U-boats, whose effectiveness a complacent Admiralty had badly underestimated in the interwar years. Until now the surface raiders that Admiral Pound had feared would “paralyse” the sea lanes had played a secondary part in the campaign. That seemed about to change. A foray by the battle cruisers Scharnhorst and Gneisenau in February and March had resulted in the destruction or capture of twenty-two ships totaling 115,600 tons. Now it was Bismarck’s turn and the transatlantic convoys, already ravaged by land-based bombers’ bombardment and prowling U-boats’ ambush, would be at the mercy of the most powerful German warship yet put to sea.

In the spring of 1941, as the crisis of the Battle of Britain faded and the Battle of the Atlantic intensified, Churchill had demanded a maximum effort from the RAF against the two enemy weapons that were wreaking most of the destruction. His words were repeated in the directive handed to Bomber Command: “We must take the offensive against the U-boat and the Focke-Wulf (Condor) wherever we can and whenever we can.” St Nazaire was listed as a target. It was not until the next year that regular raids were launched. The bombing was inaccurate and ineffective and operations were restricted by Churchill’s instruction that aircraft were to attack only when visibility was good enough to minimize the risk to French civilians. A chance had been missed. By March 1942, nine out of fourteen planned submarine pens were finished. Shielded from bombs by massive layers of reinforced concrete, there was no hope of destroying them from the air. A land attack would take enormous resources and involve considerable losses.

In March 1943, the Battle of the Atlantic approached its climax. German naval commander Karl Dönitz threw all his submarines into an effort to cut the transatlantic lifeline. The immensity of the odds dwarfed all other considerations. Every ship available was needed to stem the losses that the wolf packs were inflicting. The next planned outgoing and returning convoys were canceled. Churchill explained the decision in a letter to Roosevelt, who had maintained firm pressure on Britain to keep the convoys sailing whenever possible. In the middle of March one of the biggest convoy battles of the war was fought in the North Atlantic.

Dönitz concentrated a force of forty U-boats against convoys HX.229 and SC.122 sailing from New York. In two days, they sank seventeen ships. The disaster, wrote Churchill, was “a final proof that our escorts are everywhere too thin. The strain on the British Navy is becoming intolerable.” Roosevelt was sympathetic. At the end of March, convoys to the Arctic were postponed and the ships that would have protected them were transferred from the Home Fleet to Western Approaches Command, which had responsibility for the Atlantic routes. It would be the autumn before another Arctic convoy set sail.

There had been no sailings during the spring and summer of 1943. The middle of the year saw the climax of the Battle of the Atlantic. There was no question of the Royal Navy’s warships being diverted to escort duties in northern waters while the outcome hung in the balance. The result was that by the beginning of the autumn only a third of the volume of the previous year’s supplies had been delivered to northern Russian ports. This was bad news for Stalin. The tide had turned on the Eastern Front and he needed American and British tanks and aircraft if his armies were to exploit their gains. He was deaf to the Allies’ excuses, and Churchill and Roosevelt were subjected to continual badgering from Moscow as to when the convoys would resume. By the end of the summer, Allied air and sea countermeasures had begun to alter the balance in the Atlantic and pressure on the Home Fleet eased. Assets would now be available for convoy duty.

This article on the Battle of the Atlantic is from the book The Hunt for Hitler’s Warship © 2015 by Patrick Bishop. Please use this data for any reference citations. To order this book, please visit Amazon or Barnes & Noble.