Battle of the Eastern Solomons 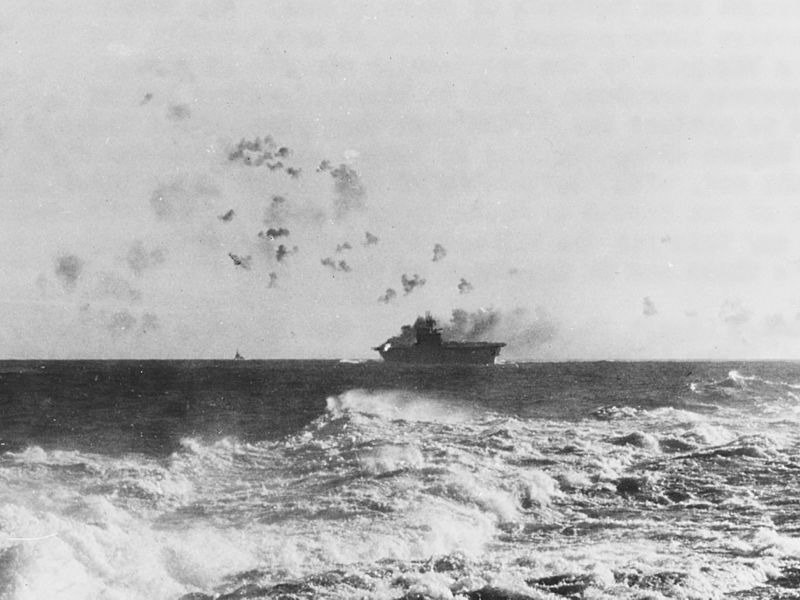 The following article on the Battle of the Eastern Solomons an excerpt from Barrett Tillman’s book On Wave and Wing: The 100 Year Quest to Perfect the Aircraft Carrier. It is available to order now at Amazon and Barnes & Noble.

The Battle of the Eastern Solomons on August 24, 1942—part of the Guadalcanal Campaign in the Pacific Theatre of World War Two—was the third carrier battle between the United States and Japan. All attacks were carried out by land or carrier-based aircraft; the two sides’ ships were never within sight of each other.

It was fought over a wide area: Nagumo well to the north of Guadalcanal and Fletcher to the north and northeast. Action began that afternoon with Ryujo launching a small strike of Nakajima level bombers against Henderson Field that was intercepted by Marine Wildcats. Both sides lost three planes, but radar plots gave Fletcher a good idea of Hara’s location.

Though Frank Jack Fletcher, riding Saratoga, had overall command of the U.S. carriers, the Enterprise operated semi-independently. Commanding the Big E’s Task Force Sixty-One was Rear Admiral Thomas Kinkaid, who led Yorktown’s escorts at Coral Sea and Enterprise’s at Midway. Though not an aviator, like Fletcher he had Nimitz’s confidence.

Fletcher stood by to repel boarders as his radar detected Nagumo’s bombers inbound. The Japanese encountered fifty-three Wildcats airborne, but some were poorly positioned to intercept. Sara and Big E quickly launched aircraft on deck to reduce the fire hazard, moments before the Aichis rolled in at 4:30. They concentrated on Enterprise, which put up a spirited defense, but the Japanese pilots were determined. Two put 550-pound bombs within feet of each other, holing the hull and detonating ammunition. A third bomb struck forward, blowing a ten-foot hole in the flight deck but causing little structural damage.

Four Aichis, thinking the carrier doomed, diverted to attack the escorting battleship North Carolina (BB-55). All four were shot into the sea.

Wildcats and AA guns took their toll on the attackers—twenty six in all. During the Battle of the Eastern Solomons five F4Fs were also downed, including victims of “friendly” antiaircraft gunners. Zuikaku alone lost her entire nine-plane bomber squadron.

AA ACTION AT THE BATTLE OF THE EASTERN SOLOMONS

Enterprise came under heavy air attack during the Battle of the Eastern Solomons of August 24. The action was described by the Big E’s gunnery officer, Lieutenant Commander Elias B. Mott.

We were absolutely unable to see the planes due to the fact that they were so high and small, and that it was late in the afternoon and the sky was considerably bluer than it would have been earlier. . . . About 1712 [5:12 p.m.] the first Jap dive bomber commenced its attack.

One of our forward 20mm gunners opened up on him when he was at 10,000 feet, and this was the signal for the formation. Everybody opened up with five-inch and with automatic weapons. The attack lasted five or six minutes, and during that time they came down one after another starting from the port bow and working around to the starboard quarter. At one time I remember seeing five Japanese dive bombers in line all the way from about 2,000 feet to 12,000. . .

We had the old 1.1 inchers without power drive and about thirty-two 20mm and of course our eight five-inch guns. Five-inch on local control did very well. They hit several planes on the nose . . . and the planes disintegrated. The tremendous number of 20mms that we were able to bring to bear on each plane caused them either to miss or to drop in flames. . . . However, as they worked around toward the stern, where we had little firepower protection, when they came down although we hit them, they were able to take aim and we sustained three hits. One on fiveinch Gun Group Number Three; one on the flight deck aft, which penetrated down three decks; and another one just abaft the island structure on the flight deck. This was an instantaneous bomb. The one that hit Gun Group Number Three wiped out the entire group of thirty-nine men.

My impression of the battle was that if we had a little more firepower, it might have been different. It looked to me that if you had enough guns that the enemy planes would be in trouble, would have to swerve off or . . . the pilot would be killed. However, in a dive-bombing attack, it’s not just a case of getting one plane or ten or even fifteen. You’ve got to get them all, you can’t afford to get hit.

Nagumo’s second wave, almost equal to the first, might have done severe damage to Enterprise, if it weren’t for poor Japanese communication during the Battle of the Eastern Solomons. The follow-up strike returned to CarDiv Five minus five planes.

Leading Enterprise’s air group was Lieutenant Commander Maxwell F. Leslie, skipper of Bombing Three at Midway. New to the Avenger, he nonetheless navigated to an erroneous contact report (waves breaking over a reef) and back again, reaching Saratoga to make his fourth landing in a TBF—his first such landing at night.

The action in the Battle of the Eastern Solomons was not over, however, as Hara’s Ryujo task force remained the focus of Saratoga’s air group, led by the tough, capable Commander Harry Don Felt, who had helped inaugurate the SBD to fleet service. Flying his personal Dauntless, “Queen Bee,” he orchestrated a coordinated attack of thirty dive bombers and eight torpedo planes against the enemy force.

Felt directed twenty-one SBDs and five TBFs to hit Ryujo while the others went for the large cruiser Tone. Attacking from fifteen thousand feet, Bombing Three and Scouting Three contributed to the tonnage dropped, but the Midway-experienced VB-3 did most of the damage. The carrier launched fighters just before bombs began to fall, too late to intervene.

The action report summarized, “Three direct bomb hits and several very close misses were observed. A torpedo hit was observed on the starboard side forward. . . . The carrier flight deck from amidships aft was smoking fiercely and flames were seen shooting out from the hangar deck. Planes rendezvoused in small groups and proceeded to their base.”

Tone dodged the torpedoes aimed at her.

Separately, Sara launched two SBDs and five TBFs responding to a report of a large surface force. Led by Lieutenant Robert M. Elder, one of the finest aviators afloat, the small formation found the battleship Mutsu with seaplane carrier Chitose and four escorts. Dropping out of the late-afternoon sky through heavy flak, the Dauntlesses put both bombs close aboard, opening Chitose’s hull and destroying aircraft on deck. In the wake of the Battle of the Eastern Solomons She was towed to Truk in the Carolines for repair and eventual conversion to a conventional carrier.

Enterprise reeled from her casualties, seventy-eight killed and ninety wounded. The toll was a shock: in the previous nine months of war she had lost fewer than one hundred dead. Clearly, carrier warfare would continue exacting a price.

The Battle of the Eastern Solomons gained the Marines on shore a valuable respite from Japanese reinforcement. Most of the Japanese troops stymied in their effort to reach Guadalcanal were delivered later, but lacking many weapons. Meanwhile, action continued at sea.

On August 31 Saratoga was sidelined for the second time that year. Another of Japan’s ubiquitous submarines caught her off San Cristobal Island and scored with one torpedo, keeping her ineffective almost until year’s end.

Meanwhile, carrier squadrons cycled in and out of Guadalcanal, code name “Cactus.” Apart from Enterprise’s Flight 300, Scouting Three joined the “Cactus Air Force” for six weeks in September and October. Wasp’s Scouting Squadron Seventy-One flew up from the rear area to remain from late September to early November. Their presence following the Battle of the Eastern Solomons was important to the perennially shorthanded air garrison.

This article on the Battle of the Eastern Solomons is an excerpt from Barrett Tillman’s book On Wave and Wing: The 100 Year Quest to Perfect the Aircraft Carrier. It is available to order now at Amazon and Barnes & Noble.