Battle of the Santa Cruz Islands 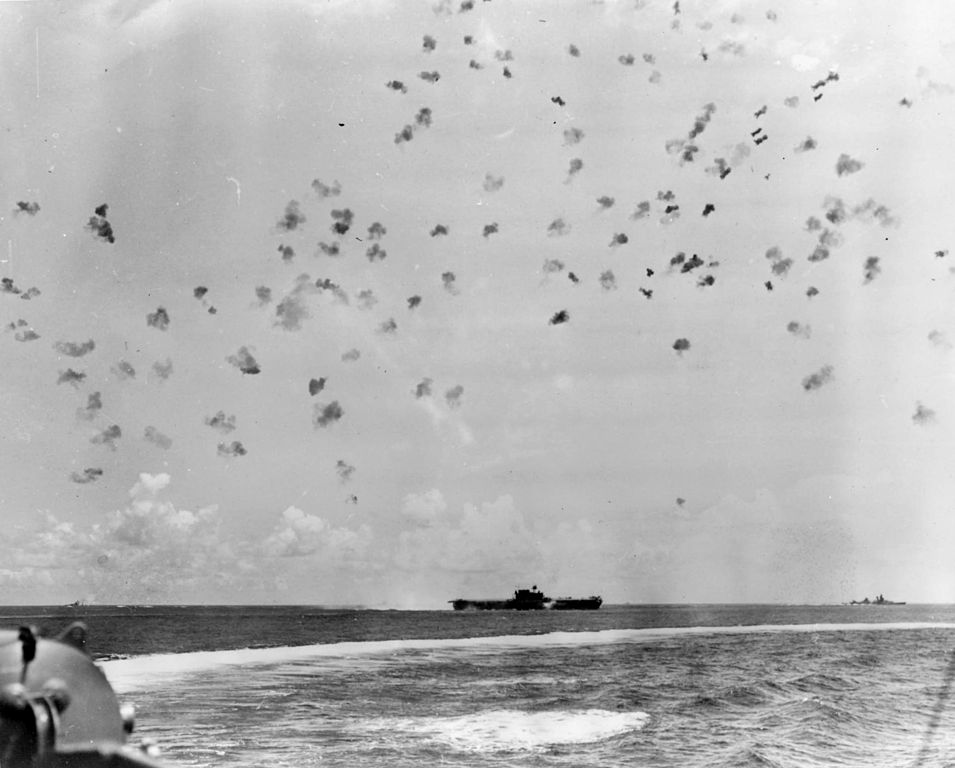 The following article on the Battle of the Santa Cruz Islands is an excerpt from Barrett Tillman’s book On Wave and Wing: The 100 Year Quest to Perfect the Aircraft Carrier. It is available to order now at Amazon and Barnes & Noble.

The malarial Santa Cruz Islands bear three hundred miles east of the Solomons, and might remain unknown to history but for the fourth carrier battle of World War II’s Pacific Campaign, fought nearby in October 1942, and known as the Battle of the Santa Cruz Islands.

JAPANESE PREPARATIONS FOR THE BATTLE OF THE SANTA CRUZ ISLANDS

In a rare example of strategic cooperation, the Japanese Army and Navy put aside their bitter enmity long enough to plan a serious effort to end the Guadalcanal campaign. Coordinated with a large Imperial Army offensive ashore, the Japanese Navy sought to defeat America’s remaining carriers, depriving the Marines of essential support at sea.

ALLIED PREPARATIONS FOR THE BATTLE OF THE SANTA CRUZ ISLANDS

Commanding the U.S. carriers was Rear Admiral Thomas Kinkaid, a veteran of Eastern Solomons. He was outnumbered as no other U.S. admiral ever would be: Enterprise (Task Force Sixteen) and Hornet (Task Force Seventeen) against four imperial carriers. Enterprise operated the new Air Group Ten, entering its first battle.

Shortly before 7:00 a.m. on October 26, scouts from both sides found the opposition. Knowing that the first blow was crucial in carrier combat, Nagumo and Kinkaid both cleared their decks, eager to get in the initial strike. In barely forty minutes Kido Butai put up sixty-four aircraft led by Lieutenant Sadamu Takahashi, including twenty-one dive bombers, twenty torpedo planes, and a new “tracker” aircraft, designed to pursue any information obtained en route.

But the Americans got in the first blow in the Battle of the Santa Cruz Islands. Two Enterprise scouts, having monitored other planes’ contact reports, diverted from their assigned sector, first to investigate a battleship report, then the carrier force. The leader was Lieutenant Stockton Birney Strong, one of the most aggressively capable aviators of his generation. During Eastern Solomons he had passed up a shot at enemy carriers to take his information directly to the Big E. He would not be doing that a second time. Together with Ensign Charles Irvine, he pushed his hunt eighty miles beyond his own sector—and his persistence was rewarded.

Zeros were harrying the on-scene scouts, handing Strong and Irvine an unexpected gift: a clear shot at what Strong called “a big carrier,” actually Zuiho, steaming near the cloud-covered Shokaku. The two SBDs rolled into their seventy-degree dives, tracked the target from astern, and expertly put both five hundred-pounders through the flight deck aft. “Auspicious Phoenix” was effectively out of the battle, unable to recover aircraft. Strong and Irvine’s gunners shot down a pursuing Zero, then both pilots squeaked back to Enterprise on fumes, finishing one of the finest missions ever flown from aircraft carriers.

However, Zuiho’s contribution to its first strike in the Battle of the Santa Cruz Islandswas already airborne. So was Kinkaid’s first launch, a hasty scramble of twenty-one Hornet SBDs and TBFs escorted by eight F4Fs. They were followed by twenty-four more planes, while Enterprise put up a fighter-heavy launch of ten bombers with eight Wildcats. The Americans now had seventy-one aircraft outbound, but they lacked Kido Butai’s institutional integration.

The opposing air groups crossed paths before 9:00, each side eyeing the other. Zuiho Zero pilots hit the Enterprise fliers from six o’clock high, knocking down two Avengers and three Wildcats while losing four Mitsubishis. Three other American pilots had to abort with battle damage, reducing the strike to ten planes including the new fighter skipper, Lieutenant Commander James H. Flatley, a Coral Sea veteran. The Big E’s fliers found no carriers, so they attacked Rear Admiral Hiroaki Abe’s vanguard force and damaged the cruiser Chikuma.

Hornet’s second strike in the Battle of the Santa Cruz Islands also came upon Abe, adding one more bomb hit. At that point two-thirds of the U.S. offensive capability was spent.

But the first Hornet launch struck gold. The SBDs were led by Lieutenant Commander William J. Widhelm, who had missed the chance to bomb carriers at Midway. He set his sights on the nearest undamaged carrier.

However, Shokaku’s newly installed radar revealed the Hornet strike at a reported ninety-seven miles—incredible performance for the period, and far better than the Type 2 set’s official range of sixty miles on formations. Undoubtedly the atmospherics favored the Japanese in the Battle of the Santa Cruz Islands with exceptional readings, as “ducting” possibly funneled the beam along an unusually narrow front, possibly yielding inaccurate figures.

Left to lead the attack was Lieutenant James M. “Moe” Vose, who recalled, “I was first to dive. Widhelm’s people had joined on mine and I saw three hits on Shokaku. As we pulled out we were taking evasive action, under continued Zero attack.”

Shokaku took at least four, possibly six, hits in the Battle of the Santa Cruz Islands, mostly aft. Serious fires erupted, requiring five hours to extinguish, and leaving the deck “looking like an earthquake fault zone.” She lost 140 of her crew and more than fifty fliers in the battle.

Meanwhile, Task Force Seventeen knew that trouble was inbound. Alerted by airborne pilots, Hornet prepared for action, but U.S. radar only registered the raiders at forty statute miles. Few of the thirty-seven available F4Fs could be vectored onto the Japanese formation, leaving Hornet’s main defense to the force’s AA guns, which opened fire shortly past 9:00.

Lieutenant Takahashi’s sixteen attacking pilots were pros: they hit Hornet with three bombs in as many minutes. A fourth plane, obviously crippled, dived into the ship’s island, spewing flaming gasoline.

Then the twenty Nakajimas arrived. Expertly splitting port and starboard for an “anvil” attack, they torpedoed Hornet twice. She went dead in the water, an easy target for a remaining Aichi that suicided into the hull.

While the cruiser Northampton prepared a tow line for Hornet, the second Japanese strike in the Battle of the Santa Cruz Islands rolled in: nineteen bombers, sixteen torpedo planes, and eight fighters. Several Fighting Squadron Ten “Grim Reapers” intercepted, living up to their name. One stellar pilot, Lieutenant Stanley “Swede” Vejtasa, expended all his ammunition on two Nakajimas and five Aichis, an unheard of feat for U.S. airmen. Nevertheless, the dive bombers hit Big E twice and landed a plate-rattling near miss.

One heroic Nakajima pilot, his plane aflame, flew into the escorting destroyer Smith, setting her on fire. The skipper steered into the battleship South Dakota’s wake, dousing the flames. South Dakota’s gunners claimed twenty-six shootdowns in the attack—clearly an exaggeration but indicative of the abrupt role reversal of battleships and carriers. The battle wagons now served as high-powered escorts for the flattops.

Nagumo’s second strike in the Battle of the Santa Cruz Islands had taken crippling losses: twenty-one of thirty-five bombers versus six American.

Meanwhile, returning Hornet pilots from the Shokaku attack drew “friendly fire” from American ships. Lieutenant “Moe” Vose summarized, “This was understandable, as the force had been under severe attack. The Hornet was badly hit and unable to take us, and although Enterprise was on fire forward with a bomb hit aft, we still recovered aboard. On landing, the aft elevator was jammed in the down position so it was necessary to catch the number one wire.”

Dozens of TF-61 aircraft remained overhead, gasping for fuel. Enterprise’s talented landing signal officer, Lieutenant Robin Lindsey, took aboard pilots from both carriers. He continued landing planes until the flight deck was nearly full. The last pilot in the pattern was Swede Vejtasa, whose trust in Lindsey was justified. The LSO gave him an early “cut” signal, and the new ace skillfully snagged the rearmost wire, “locking” the deck: there was no more room. Sixteen remaining pilots ditched or headed for distant Espiritu Santo.

While Northampton was laboriously towing Hornet, Junyo and Zuikaku’s persistent air groups flung three more attacks at the Americans in the final stages of the Battle of the Santa Cruz Islands. They totaled fourteen torpedo planes, six bombers, and nineteen Zeros, adding another torpedo and bomb hit, leaving the pummeled carrier without power. There was no option but to scuttle Hornet, though she resisted, taking torpedoes and hundreds of shells from her escorts. Finally, two Japanese destroyers put her under in the early morning hours. She sank with 118 crew and twenty-two fliers dead or missing.

Kido Butai had sent 138 sorties against TF-61 in the Battle of the Santa Cruz Islands, more than Nagumo launched at Midway and Eastern Solomons combined. But in exchange for sinking Hornet and damaging Enterprise, the Japanese incurred crippling personnel casualties, losing 145 experienced pilots and aircrew—even more than at Midway. The attrition could be replaced in numbers, but never in quality.

Unlike Eastern Solomons two months before,the Battle of the Santa Cruz Islands was a clear Japanese tactical victory. But Tokyo’s combined Army and Navy strategy failed to end the Guadalcanal campaign, where the bloodletting continued.

The U.S. Pacific Fleet was left with one fast carrier, the battered Enterprise, which counted forty-four sailors killed and sixteen fliers missing. Her damage control team again demonstrated its expertise, and she was back in action in two weeks.

As PacFleet’s only available big-deck carrier, Enterprise was a priceless asset that season. Air Group Ten cycled in and out of Henderson Field on Guadalcanal during the November crisis, contributing to the ultimate defeat of Japan’s final effort to retrieve the situation. When Tokyo decided to withdraw its remaining troops in February, the vital six-month Guadalcanal campaign reached its sanguinary end.

This article on the Battle of the Santa Cruz Islands is an excerpt from Barrett Tillman’s book On Wave and Wing: The 100 Year Quest to Perfect the Aircraft Carrier. It is available to order now at Amazon and Barnes & Noble.