Brown v. Board Of Education of Topeka 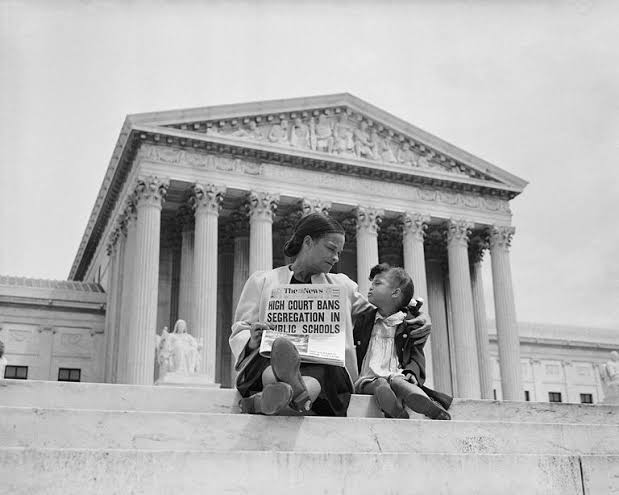 Brown v. Board Of Education of Topeka was a landmark decision of the U.S. Supreme Court in which the Court ruled that American state laws establishing racial segregation in public schools are unconstitutional, even if the segregated schools are otherwise equal in quality.

Handed down on May 17, 1954, the Court’s unanimous (9–0) decision stated that “separate educational facilities are inherently unequal,” and therefore violate the Equal Protection Clause of the Fourteenth Amendment of the U.S. Constitution. However, the decision’s 14 pages did not spell out any sort of method for ending racial segregation in schools, and the Court’s second decision in Brown II (349 U.S. 294 (1955)) only ordered states to desegregate “with all deliberate speed.”

Brown v. Board Of Education of Topeka: Let’s force those kids together—even if they have to be bused two hours a day!

One of the most notorious ways of doing that was by means of forced busing, which was upheld by the Supreme Court in Swann v. Charlotte-Mecklenburg Board of Education (1971). Although Swann envisioned forced busing being carried out only in the South, where school segregation had once had the force of law, later court decisions made clear that busing could also be imposed in Northern school districts that had never officially discriminated against blacks in the past. Parents all over the country, from Boston to Denver to Los Angeles, found their children being bused all over the city to accommodate a social engineer’s plan. In Los Angeles, the average bused child spent nearly two hours on the bus every day.

But decisions even more sweeping than Brown were still in store. In 1968 the Supreme Court handed down its ruling in the case of Green v. County School Board of New Kent County. The case involved a Virginia school district that had a “free choice” system in which transportation would be provided to any student to attend the school of his choice. In practice, none of the white children decided to attend the black school, and only a small number of black students chose to go to the white school.

The district believed that it had complied with the Court’s ruling in Brown since access to schools was available without regard to race. Whether people actually took advantage of this policy was irrelevant; they had the opportunity to choose schools, and that was what everyone thought mattered. But in its 1968 ruling in Green, the Court decided that when it came to schools, desegregation programs were to be evaluated not by the opportunities they opened up but by the results they achieved. If the races continued to be largely segregated, the district was held to be in breach of its requirement to desegregate, even though it had given all students the right to attend whatever school they wished.

Some have argued that Green represented a radical departure from the reasoning employed in Brown. Brown had been a desegregation measure that called upon school districts to assign students to schools without regard to race; Green was an integration measure that was obsessed with race. Yet the reasoning employed in Green was already implicitly contained in Brown. According to Brown, what made segregated schools inherently inferior was precisely that blacks did not have white classmates. Green, nearly a decade and a half later, merely took up where Brown had left off. Now that purely voluntary means of mixing the races had been tried and had not brought about the desired outcome, Green seemed to say that coercive measures could not be ruled out. The bottom line was that in order for the education of the races to be equal, there must be racial mixing of the schools. Green was simply more straightforward about what would need to be done: forcing parents, against their wills, to send their children to schools chosen by the state.