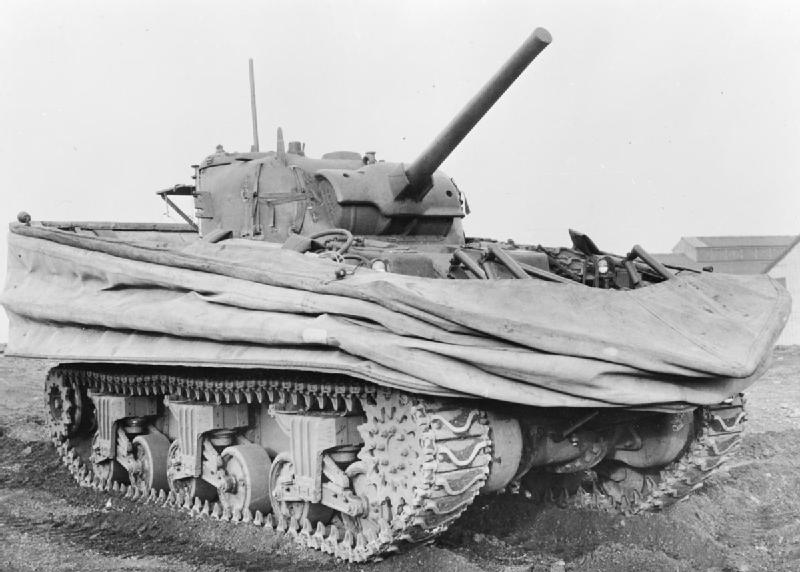 The following article on the DD Tank is an excerpt from Barrett Tillman’ D-Day Encyclopedia. It is available for order now from Amazon and Barnes & Noble.

For Operation Overlord, 514 tanks were modified with duplex drive kits intended to give the armored vehicles an amphibious capability. This transformed them into the “DD Tank” — the duplex drive tank. The modifications—a British concept—mainly comprised a twin-screw propulsion system at the rear of the vehicle for water navigation and inflatable skirts, or ‘‘bloomers,’’ to aid buoyancy. Though the arrangement worked well for shallow water, such as rivers, it proved disastrous in ocean swells. The skirts afforded only a low freeboard, which left the hulls susceptible to being swamped.

Gen. Bernard Montgomery’s Twenty-first Army Group staff decided to send the DDTanks ashore in the first wave, supported by naval gunfire. It was felt that the early presence of the DDTank on the beaches would demoralize Germans and provide rallying points for the assault troops, plus badly needed firepower against enemy strongpoints.

The DD tank was expected to churn their way through rough seas and headwinds from as much as three nautical miles offshore, but very few survived the trip. Of one group of twenty-nine DD Shermans launched five thousand yards out, only two reached shore. Many crews drowned with their tanks, while others were forced to ‘‘abandon ship’’ when the ungainly vehicles sank or capsized. However, others were more fortunate, including one in an LCM with a bow that refused to lower, requiring the craft to beach itself for unloading. Some commanders had realized that the concept was totally unsuited to conditions off Normandy that day and ignored the order to launch the DD tanks. The 743d Tank Battalion delivered all of its Shermans directly to the beach.

This article on the DD Tank is from the book D-Day Encyclopedia, © 2014 by Barrett Tillman. Please use this data for any reference citations. To order this book, please visit its online sales page at Amazon or Barnes & Noble.