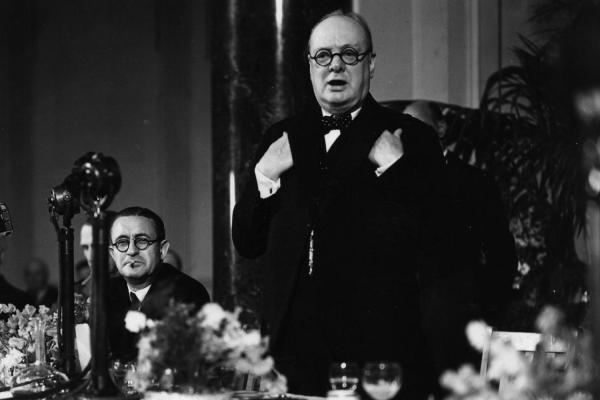 This article on the Finest Hour speech is from James Humes’s book Churchill: The Prophetic Statesman. You can order this book from Amazon or Barnes & Noble.

For Churchill to maintain optimism of British victory in the darkest days of World War II required a sense of hope that appeared to civilians and advisors to border on lunacy. In September 1940, German bombers began to appear over London. Hitler changed tactics in his attempt to subdue Great Britain. In the previous two months, the Luftwaffe targeted RAF airfields and radar stations in order to weaken the nation to the point that he could launch a German invasion. When he realized such an offensive launch was impossible, because it would deplete too much manpower from the Eastern front, he switched to a campaign of fear and intimidation. Bombing London to ruin would demoralize the population to the point of hopelessness and surrender.

For the next year Britain held its resolve. It was battered but did not crumble. In fact, the war energized Churchill, who was sixty-five years old when he became Prime Minister. Churchill maintained his private strength by taking each day at a time. Churchill resolved that the only way to move past The Darkest Hour was to keep moving. He commented that “success consists of going from failure to failure without a loss of enthusiasm.” Alternatively, “If you’re going through hell, keep going.”

On June 18, 1940, Churchill attempted to lift up England following the fall of France and the successful evacuation of most of England’s supporting forces from the continent. At the moment of great apparent danger to British national survival, he spoke not only of endurance but of noble causes of which Britain was fighting (freedom, Christian civilization, the rights of small nations): “Let us therefore brace ourselves to our duties, and so bear ourselves, that if the British Empire and its Commonwealth last for a thousand years, men will still say, ‘This was their finest hour.’” The speech lasted thirty-six minutes. The final passage of his typescript was laid out in blank verse format, which historians believe shows the influence of the Old Testament psalms on Churchill’s oratorical style.

This article on the Finest Hour speech is from James Humes’ book Churchill: The Prophetic Statesman. Please use this data for any reference citations. To order this book, please visit its online sales page at Amazon or Barnes & Noble.