The following article on German Artillery WW2 is an excerpt from Barrett Tillman’ D-Day Encyclopedia. It is available for order now from Amazon and Barnes & Noble.

The 7.5 cm Feld Kanone 38 was a three-inch fieldpiece weighing 3,136 pounds capable of firing twelve- to thirteen-pound high-explosive shells at nearly 2,000 fps. Maximum elevation was forty-five degrees, permitting a range of 12,500 yards. The piece was tractor towed.

The most famous artillery gun of World War II was the Flak 88 cannon, an 8.8 cm high-velocity weapon equally applicable for antiaircraft and antitank use. The design, adapted in 1938, weighed about 9,600 pounds and was towed by a prime mover. It was served by an eleven-man crew, which occasionally could sustain twenty rounds per minute. With a muzzle velocity of 3,700 feet per second the projectile could defeat 130 mm (5.07 inches) of armor at 1,500 yards.

Germany’s standard field artillery weapon was the 10.5-cm LFH.18/40, a World War I design upgraded with a muzzle brake that improved range to 13,400 yards. The four-inch howitzers were typically deployed in the three battalions (three batteries each) of an infantry division’s artillery regiment. Another 105 mm piece was the K.18 medium gun, with a range of more than twenty thousand yards.

The 15 cm FH.18 was Germany’s division-level medium howitzer. With an all-up weight of six tons it fired high-explosive, armor-piercing, and smoke rounds weighing about ninety-five pounds to a distance of 14,600 yards. In a ‘‘Type 1944’’ infantry division, the six-inch weapons were deployed in one of the four artillery battalions.

Easily among the most formidable of Germany’s mobile artillery was the 17 cm Kanone 18 cannon in a howitzer carriage. Extremely well designed, it was quick into action and permitted one soldier to traverse the nineteen-ton gun 360 degrees using the trail spike. At fifty degrees elevation, it fired a 6.7-inch, 140-pound shell at 3,000 fps to a range of thirty-two thousand yards, or eighteen miles.

The German army’s heavy fieldpiece was the 21 cm Morser 18 howitzer. Its 250-pound projectiles were 8.27 inches in diameter—the size of a heavy cruiser’s main battery—with a maximum range of 18,300 yards. The gun and carriage were so large that in transit the twenty-one-foot barrel was supported by a traveling carriage, while the trail rested on a two-wheeled trailer. The howitzer’s weight in action was nearly thirty-seven thousand pounds. The heavier K.39/40 coastal version was even longer ranged.

Coastal artillery used many of the same weapons mounted in casemates, usually manned by army units under navy control. In the Utah Beach sector, for instance, 110 guns from 75 to 210 mm were arrayed, capable of destroying landing craft or armored vehicles. In thirty sites along the Normandy beaches, coastal defense batteries in concrete bunkers totaled 128 ‘‘tubes’’ of from 100 to 210 mm, the most common being 105 and 155. Others were 122, 150, and 170 mm. 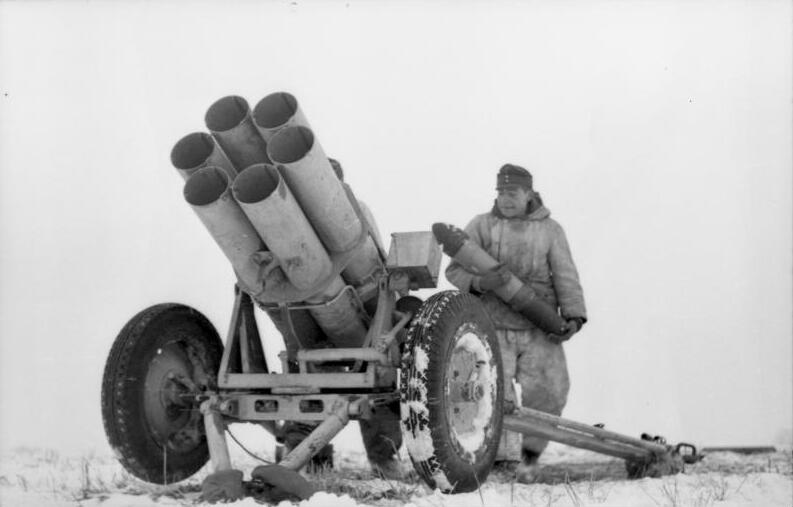 During the Normandy campaign, Allied soldiers frequently cited Germany’s multi-barrel rocket launcher as the most fearsome weapon they faced. The eerie screech of the rockets in flight gave rise to the nickname ‘‘Screaming Meemies.’’

Germany began developing tactical rocket projectors (generically called Nebelwerfers, or smoke projectors) in the early 1930s and eventually produced them in sizes from 100 to 300 mm. The most common were the Nebelwerfer 41, a 150 mm weapon with six tubes mounted on a 37 mm antitank gun carriage, and the 42, with five 210 mm barrels. Later in the war, Nebelwerfers were mounted on vehicles—mostly halftracks. The weapon was fired electronically, discharging its rockets in a ten-second volley to avoid excessive recoil. The spin-stabilized projectiles were tipped with explosives, gas, or smoke, with a typical range of some seven thousand meters.

Nebelwerfers were first deployed to combat in Russia in 1941 but were widely deployed in France by D-Day. Both Heer (army) and Waffen SS batteries or regiments were encountered—thirty-five sites in the frontage of the 352d Infantry Division alone.

This article on the German artillery WW2 is from the book D-Day Encyclopedia, © 2014 by Barrett Tillman. Please use this data for any reference citations. To order this book, please visit its online sales page at Amazon or Barnes & Noble.