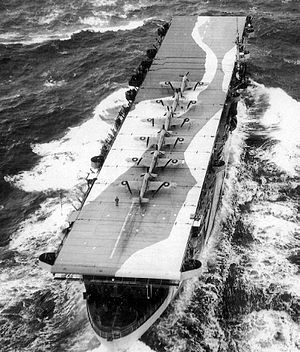 The following article on the HMS Avenger and Dasher is an excerpt from Barrett Tillman’s book On Wave and Wing: The 100 Year Quest to Perfect the Aircraft Carrier. It is available to order now at Amazon and Barnes & Noble.

As the Guadalcanal campaign peaked in the Pacific, American carriers prepared for a major Allied offensive in North Africa. Operation Torch landed on the shores of French Morocco on November 8, 1942, with Ranger (CV-4), Suwanee (ACV-27), Sangamon (ACV26), and Santee (ACV-29) supporting U.S. forces north and south of Casablanca. In all, the four flattops embarked 109 Grumman F4F-4 fighters with sixty-two Douglas SBD-3 and Grumman TBF-1

But a catastrophic carrier loss occurred in Torch’s wake. On November 15 the American-built HMS Avenger was en route to Gibraltar for engine repairs when she crossed paths with the German U-151, which had already sunk seven ships that month. Once more a single torpedo destroyed an RN carrier, although all but twelve of her 528 crew survived. She was Kapitänleutnant Adolf Piening’s twenty-second victim.

It was a sad end to HMS Avenger, a Royal Navy escort carrier that was launched in 1940 as a merchant ship and convert to an escort carrier for the Royal Navy. She was commissioned in March 1942. The HMS Avenger held 15 aircraft and took part in a massive Russian convoy in September 1942.

On March 27, 1943, the escort carrier HMS Dasher was anchored in the Firth of Clyde on Scotland’s southwest coast. Though only eight months in commission, she had participated in Operation Torch, Mediterranean ferry missions, and a convoy escort. An internal explosion inflicted catastrophic damage that destroyed the 8,200ton ship in about three minutes. As Britain’s last carrier loss she was, in English terminology, an “own goal.” Dasher lost 378 of 528 men aboard, or 71 percent—an extremely high mortality rate for a ship at rest. No definite cause for the explosion was determined, but opinion tended toward the fuel system. In an eerie postscript, wood from the flight deck washed ashore at nearby Ardossan in 1999.

Another CVE expedient was the Empire class of converted grain and oil carriers, merchant crewed with RN airmen, maintenance and support personnel, and shipboard gunners. Ten ships were delivered beginning with Empire MacAlpine in April 1943, but the four ex-tankers had no hangar deck. Mostly flying Swordfish, the Empires often carried cargo in addition to the small FAA “air party.”

This article on HMS Avenger and Dasher is an excerpt from Barrett Tillman’s book On Wave and Wing: The 100 Year Quest to Perfect the Aircraft Carrier. It is available to order now at Amazon and Barnes & Noble.