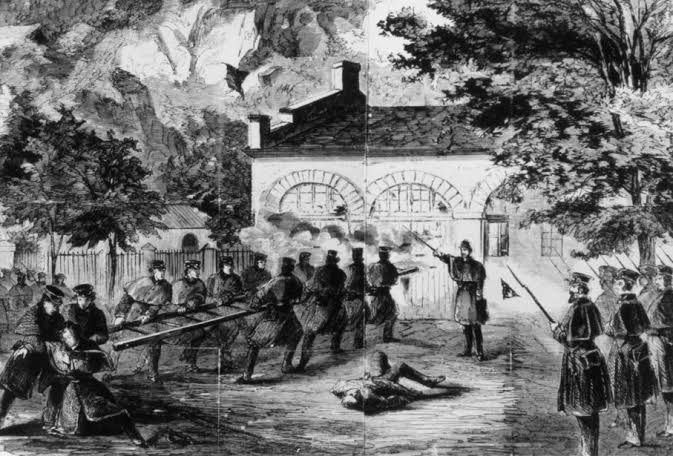 John Brown’s raid on Harpers Ferry was an 1859 effort by abolitionist John Brown to initiate an armed slave revolt in Southern states by taking over a United States arsenal at Harpers Ferry, Virginia.

It is difficult to exaggerate the significance of John Brown’s raid on the federal arsenal at Harpers Ferry, Virginia (now West Virginia), in 1859. Brown, who was almost certainly insane, believed himself to be on a divine mission to destroy the institution of slavery. Three years earlier, he had carried out the bloody Pottawatomie Creek Massacre in Kansas, where mutual antagonism had existed between pro- and anti-slavery factions ever since the highly irregular elections for the territorial legislature in 1855.

Brown and his companions targeted five families—none of whom owned any slaves— who in Brown’s view were loyal to the wrong Kansas faction. His methods were terrifying: In each case, he and his followers dragged the man of the house from his bed and butchered him as his family screamed in horror. Following this gruesome episode Brown became a fugitive, only resurfacing in 1859 when he planned a strike against slavery that he hoped would be far more systematic and effective than the murders he had perpetrated in Kansas.

In October 1859, Brown and nineteen followers seized the federal arsenal at Harpers Ferry to foment and equip a massive slave insurrection throughout the South. It was a spectacular failure: Brown and his supporters found themselves surrounded by hostile local citizens, militiamen, and even U.S. troops commanded by Robert E. Lee. Brown surrendered after ten of his followers had been killed. He and six followers were sentenced to death and hanged.

Not surprisingly, Southerners at this point grew concerned about their safety in the Union. Virginia secessionist Edmund Ruffin, for example, distributed throughout the Southern states some cast-iron pikes that Brown had brought with him, along with a label that read, “Sample of the favors designed for us by our Northern brethren.” Despite Lincoln’s protestations to the contrary, and a statement in the Republican Party’s platform condemning Brown’s raid, many Southerners suspected Republican sympathy for Brown.

Historian Stephen Channing showed in his book Crisis of Fear (1974) how fears and suspicions regarding Northern intentions and behavior in the wake of John Brown’s raid contributed to South Carolina’s decision to secede from the Union in 1860. When it was learned that prominent Northerners (the “secret six”), who had to have known of Brown’s character, had bankrolled his expedition, some Southerners understandably concluded that they were so hated by the North that the section would hardly regret, and might even welcome, their departure from the Union.