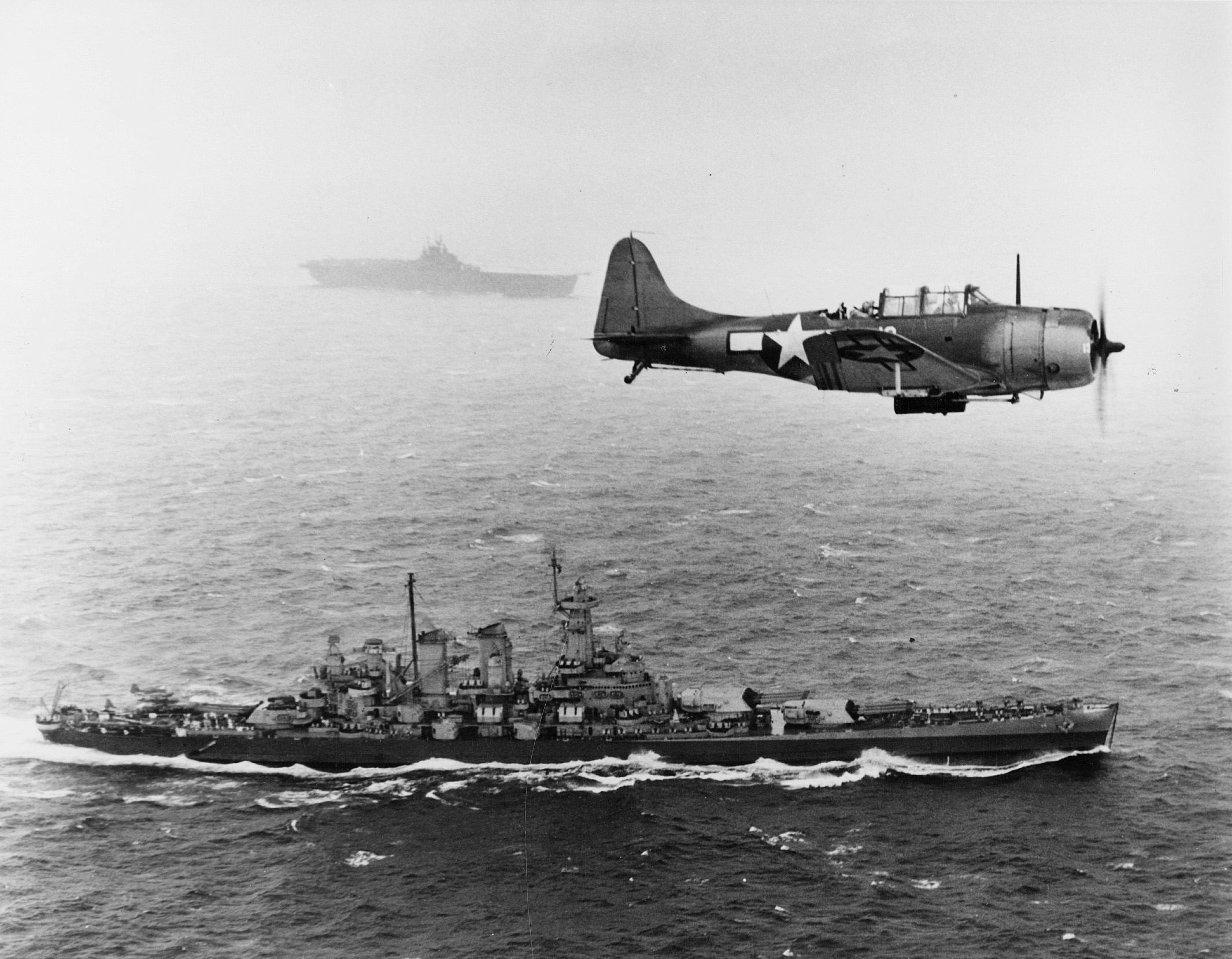 The following article on the Mariana and Palau Islands Campaign is an excerpt from Barrett Tillman’s book On Wave and Wing: The 100 Year Quest to Perfect the Aircraft Carrier. It is available to order now at Amazon and Barnes & Noble.

The Central Pacific Offensive—a campaign whose goal was to neutralize Japanese bases and provide bases for a strategic bombing of Japan—had an obvious destination: the Marianas. Plans for taking the Marianas became reality in the Mariana and Palau Islands Campaign, also known as Operation Forager.

Located in mid-ocean, the Japanese-held islands boasted several airfields on Guam, Saipan, and Tinian. In American hands the bases would put B-29 bombers within range of Japan itself. There was no question of how Tokyo would react to the Mariana and Palau Islands Campaign

American assault troops invaded Saipan on June 15, evoking a predictably heavy response from the Imperial Navy. There had been no fleet engagements in the twenty months since Santa Cruz, but the mandatory defense of Saipan ensured the largest carrier clash of all time. It pitted fifteen Task Force Fifty-Eight flattops against nine of the Japanese Mobile Fleet.

Vice Admiral Jisaburo Ozawa’s plan called for land-based aircraft to shuttle between Guam and the Mobile Fleet carriers, placing the Americans in an aerial vise. But after nearly three years of war, the Imperial Navy’s quality and quantity were diminished. On the other side, Vice Admiral Marc Mitscher’s TF-58 aircrews were thoroughly trained, combat-tested, and confident. The Fifth Fleet commander, Admiral Raymond Spruance, was required to defend the beachhead but gave his carrier commander considerable latitude.

The Mariana and Palau Islands Campaign opened shortly after dawn on June 19 when a sizable portion of TF-58’s 400 Hellcats flew CAPs over the task force and the islands. Several fights broke out as Japanese scout planes and fighters took off, but the major engagement began mid-morning. Ozawa’s carriers launched the first of four strikes at the American force, which lacked precise knowledge of the Mobile Fleet’s location.

It mattered little. With ample F6Fs on hand and expert fighter direction, each raid was intercepted and repulsed with severe loss. American fighter pilots had never enjoyed such good hunting. Of sixty-four Japanese planes in Raid One, only twenty-two survived. So it went throughout the day. Sailors standing topside on many ships could watch the progress of the air battle, as wispy white contrails circled in the bright Pacific sky, punctuated by greasy streaks of falling aircraft—nearly all bearing rising suns.

When it was over, nearly three hundred IJN aircraft had been shot down or wrecked. Seven Hellcat pilots had splashed five or more “bandits,” including Lieutenant (jg) Alexander Vraciu of Lexington’s VF-16. In a sizzling eight minutes, he downed six Yokosuka “Judy” dive bombers to become the Navy’s leading ace. The pilot who succeeded him in the top spot was Commander David McCampbell, leading Essex’s Air Group Fifteen. He shot down seven planes in two sorties.

A Hornet Hellcat pilot unexpectedly found himself presented with a gift. Circling a downed U.S. flier off Guam, Ensign Wilbur Webb— a Pearl Harbor survivor—awaited a rescue aircraft. Then he noted a large formation overland. Investigating, he discovered a flock of Aichi Val dive bombers, so he joined the traffic pattern. Keying his mike he broadcast, “This is Spider Webb to any American fighter pilot. I have about forty of ’em cornered over Orote Point and I could use a little help.” In minutes he shot down six with two more probably destroyed. His riddled F6F never flew again, but Webb joined the ranks of the instant aces. Small wonder that the battle entered history and legend as “The Great Marianas Turkey Shoot.”

Mitscher lost barely thirty planes, including seventeen Hellcats in combat. While a handful of attackers got through the CAP, they inflicted no significant damage. The Japanese were not so fortunate, as aggressive American submarines found the enemy force, sinking Pearl Harbor veteran Shokaku and Ozawa’s new flagship Taiho.

An Imperial Navy staff officer, Commander Masatake Okumiya, summarized his aircrews’ dilemma: “They never stood a chance against the determined defense of the Hellcat fighters and the unbelievable accuracy and volume of the ships’ antiaircraft fire.”

Pushing through in the Mariana and Palau Islands Campaign

Task Force Fifty-Eight scouts sought Ozawa’s retreating force through most of the day June 20. Enterprise TBFs located him well to the west in mid-afternoon, over three hundred miles distant. Mitscher calculated the odds of retrieving some 220 planes in darkness, but he could not pass up the first shot at Japanese flattops in nearly two years. Turning to his staff on Lexington’s bridge, he merely said, “Launch ’em.”

It was a long flight into the westering sun that evening, and darkness was approaching as the strike groups selected their targets. The priority had been chalked on ready room blackboards: “Get the carriers!” Though Wasp’s (CV-18) air group went for Japanese oilers, the others chose among Ozawa’s three carrier divisions.

The results were disappointing. Intense enemy flak and aggressive fighters reduced the effectiveness of the strike, which sank just one carrier. Belleau Wood (CVL-24) Avengers launched torpedoes against the twenty-four thousand-ton Hiyo. The division leader, Lieutenant (jg) George Brown, had promised a hit, and he delivered. One pilot, probably Lieutenant (jg) Warren Omark, put his torpedo into Hiyo’s stern, causing unmanageable damage. Brown did not return, but the “Flying Hawk” sank that night.

Having sunk one flattop and damaged another, the Americans turned for home. About twenty planes were lost in the attack, but nearly two hundred others faced a daunting challenge: finding their way back on a moonless night.

The Mariana and Palau Islands Campaign was a roaring success. Upon return to the task force, pilots found nearly every ship lit up. Mitscher, in a well-intentioned but counterproductive move, gave his famous order: “Turn on the lights.” The beams helped guide gasstrapped aviators home, but many could not distinguish between the lights of carriers and cruisers or destroyers. Pilots landed in the water after wasting precious fuel in passes at escorts. Others crashed on deck, preventing squadron mates from getting aboard.

When it was over, nearly half of the 216 planes on the mission were lost. Fuel starvation was the main cause, with only five of the fifty Helldivers returning safely. In vivid contrast, just three of the twenty-seven Dauntlesses were lost. The Navy had already decided to stop buying SBDs, however, and the Douglas production line shut down. After two and a half years the Dauntless’s contribution to America’s war effort in the Pacific could hardly be exaggerated.

In the mop-up operations of the Mariana and Palau Islands Campaign, Task Force Fifty-Eight ships and aircraft spent most of the next few days seeking downed fliers, with surprising success. More than three-quarters of the missing airmen were rescued.

The First Battle of the Philippine Sea produced strategic results. The Imperial Navy was finished as an offensive force, and before year end B-29s were flying missions against Japan from Marianas bases. The Mariana and Palau Islands Campaign was a success.

This article on the Mariana and Palau Islands Campaign is an excerpt from Barrett Tillman’s book On Wave and Wing: The 100 Year Quest to Perfect the Aircraft Carrier. It is available to order now at Amazon and Barnes & Noble.