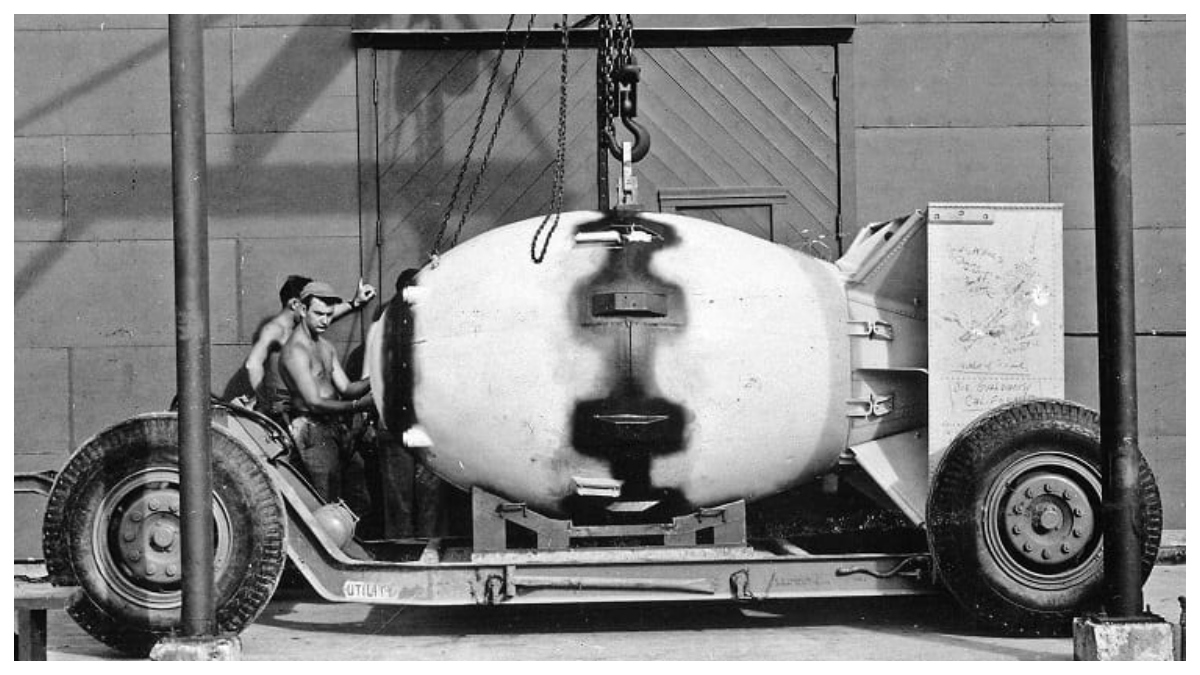 The most expensive weapons of the Second World War were the culmination of serendipity coupled with countless hours of planning.

[American scientists and engineers conducted the three most expensive weapons development projects of WW2. Together, this trio of inventions would end the war. Contributor Dan McEwen tells their story.]

Even as the battleships sunk at Pearl Harbor on December 7th were being re-floated, President Franklin Roosevelt announced the strategy that would enable Americans to win the war:  “Powerful enemies must be out-fought and out-produced. It is not enough to turn out just a few more planes, a few more tanks, a few more guns, a few more ships than can be turned out by our enemies. We must out-produce them overwhelmingly so that there can be no question of our ability to provide a crushing superiority of equipment in any theater of the world war.”

And so, while 16 million Americans went to war, 24 million Americans went to work. In the greatest feat of munitions production the world would ever see, they would soon be producing more aircraft in a month than Japan’s factories could in a year; more aircraft carriers in a year than their shipyards constructed during the entire war; more cargo ships than Axis U-boats could sink, 3.4 million tons of bombs to be dropped on Germany and Japan.

Among the armory of weapons designed and built-in U.S. war plants between 1941 and 1945, three shared a date with destiny. Each made the other two possible; each needed the other two to function. Together, they would be the three most expensive weapons of the war; together they would end that war.

1] The Manhattan Project [$1.9 billion] – To Make the Bomb: Atomic weapons existed in the realm of science fiction when in 1938, physicist Albert Einstein warned President Roosevelt that Germany had to resources to build an A-bomb. They never did, but fear of that possibility drove Roosevelt to establish America’s own nuclear program. The Manhattan Project [named for its original location on New York’s Broadway Ave.] came into existence on August 13, 1942, with a half-billion dollars in start-up funding.

Although the project’s offices were soon moved to Washington, the actual research would be done in a number of labs around the country but primarily at Los Alamos in New Mexico, under the watchful eye of Robert Oppenheimer, another brilliant theoretical physicist. He and a legion of chemists, metallurgists, explosive experts, and military personnel were just a fraction of the 600,000+ people who would eventually work on the project. Their efforts culminated on July 16th, 1945 when the world’s first atomic bomb was successfully detonated. Generating the explosive power of 20 kilotons of TNT, it sent the iconic mushroom-shaped plume of cloud eight miles into the desert sky.

All the time that Oppenheimer and his team were feverishly assembling their “Gadget” as they code-named it, crews of the 509th bomber group of the Army Air Forces were training at airfields in Utah and Cuba to drop it. With the successful test, they packed their duffel bags and headed out to distant Tinian Island in the Pacific for the real thing.

2] The Boeing B-29 [$3.0 billion] – To Fly The Bomb: “There are those who say bombing can never win a war. Well, I say it has never been tried and we shall see.” With those words, the crusty Marshal of the UK’s Royal Air force, Arthur “Bomber” Harris launched a campaign of night bombing in 1941 aimed at incinerating German cities. Some 12,000 4-engine Lancaster, Halifax and Stirling heavy bombers flew 364,514 sorties over the Third Reich. Even with the cover of darkness, 8,325 were shot down, killing over 57,000 airmen, a 46% death rate. Berlin alone was attacked 16 times at a cost of 1,047 bombers and 7,000 aircrews but failed in its objective of inflicting a decisive defeat on Nazi Germany.

Undeterred by their British ally’s costly experiences, a “Bomber Mafia” within the U.S. Army Air Force remained as zealous as Harris in believing that precision high-altitude bombing – in daylight no less – could make Hitler cry “Uncle”. In a single raid on the munitions factories in the city of Schweinfurt on August 17th, 1943, 36 of the 230 attacking B-17s were blown out of the sky by 300 Luftwaffe fighters. A second raid a month later resulted in another 60 falling on what is grimly known as “Black Thursday. The third try on January 11th, 1944 added 60 more to the toll! Only the arrival of long-range fighters lessened the grisly toll.

But in the Pacific Theater, a campaign of 1,000 planes, night-bombing raids had reduced 60% of Japan’s paper and wood cities to smoking ruins at a cost of fewer than 100 planes to enemy fire. The campaign’s leader, a cigar-chomping Army Air Force general named Curtiss Lemay was a True Believer in bombings’ potential. However, LeMay’s crews weren’t using the lumbering B-17 Flying Fortresses or B-24 Liberators deployed in Europe: they were flying the shiny new B-29 “Super Fortress”, the biggest, fastest highest-flying bomber of the war.

Allied bombers based in England only needed to fly a few hundred miles to reach targets in Europe. The Pacific Theater would be defined by its vastness and US military planners anticipated bombers there would need much greater range. Three months after German armies had swept into Poland in September of 1939, the Pentagon issued a tender for a high-altitude ‘strategic’ “super-bomber” that could deliver 20,000 pounds of bombs to targets 2,600 miles away and at a speed of 350 mph at altitudes up to 32,000 feet, high enough to put them out of reach of Japanese fighter planes. No easy task.

Aviation giant Boeing won the contract and dedicated four main-assembly factories to B-29 production Additionally, thousands of the plane’s parts were sub-contracted to suppliers across the nation. With a Herculean effort, they got the first prototype into the air in September 1942 but the hurried design came with serious problems. The pressurized cabin, a first for aviation, bedeviled the engineers. The four 2,200-horsepower Wright Duplex Cyclone engines tended to over-heat on take-off. When an early prototype took to the air in February 1943 at Boeing Field in Seattle, an engine fire led to a crash that killed the 10-man crew. By the end of the year, only 15 airworthy planes had been delivered. A radical reorganization of the entire production process ironed out the bugs and by war’s end, 2,766 had been produced at a cost of $639,000 each.

LeMay’s B-29 armada was originally based in China where crews soon discovered that bombs dropped at high altitudes were blown off target by the Jet Stream. His solution was to bring the bombers down to 10,000 feet, despite the greater risk to them from enemy fire. What’s more, operating from bases in China proved an enormous logistical challenge, and the decision was made to capture islands in the Marianas chain, closing the distance to targets in Japan to only 1,500 miles.

But on Iwo Jima, the true cost in blood of the B-29 program would be paid. The invasion of that island, which took the lives of 7,000 marines and left another 20,00 wounded was justified by US Navy planners as necessary to provide a base for the shorter range fighter planes that would be escorting that B-29’s coming from Tinian. But LeMay’s night-flying bombers didn’t need fighter escorts. Then too, after 350 of Japan’s dwindling number of carrier aircraft and another 200 land-based aircraft were shot down in flames in the famous “Turkey Shoot” in June, the Imperial Japanese Navy had nothing to throw at the bombers. When a crippled B-29 made an emergency landing on Iwo Jima’s runway amid the fighting, the invasion’s role was quietly recast as providing maintenance to damaged B-29s. The handful of crews saved by this runway was a tiny fraction of the men who died to secure the island on which it was built.

3] The Norden Bomb Sight [$1.5 billion] – To Guide the Bomb: It was one thing to get bombers over a target, another to actually hit that target – even from 10,000 feet. WW1 pilots had eye-balled their attacks. Clearly, a better mousetrap was needed and Swiss engineer Karl Norden thought he’d invented it He proudly promised his bombsight would allow bombardiers to drop a bomb into a pickle barrel from 20,000 feet. Drawn by this siren call, the Pentagon spent $1.5 billion turning Norden’s designs into reality. 90,000 were installed in American B-17s, B-24s, and B-29s [ditto British bombers] at a cost of $14,000 each and 50,000 bombardiers trained to use them.

Bulky, finicky, and still entirely dependent on the bombardier’s accurately eyeballing the target, Norden’s ‘miracle’ device proved an un-miraculous flop. In one raid for example, of the 85,000 bombs dropped in an attack on a 757-acre German chemical plant, just 10% hit their target. The Butt Report in August of 1941 found that fewer than one bomb in ten was falling within 5 miles of its intended target. Post-war studies would confirm its findings.