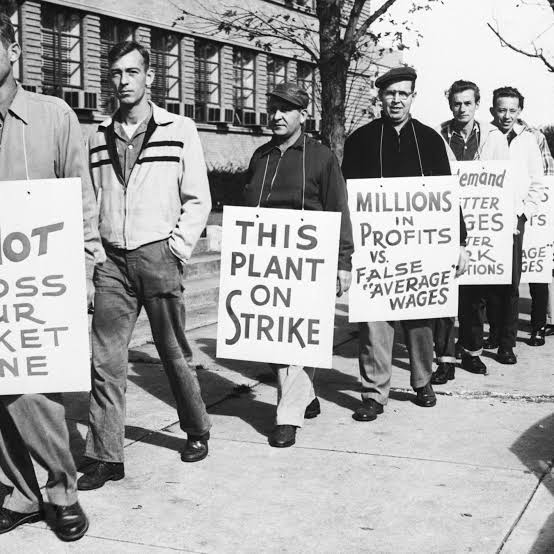 Franklin D Roosevelt gave a tremendous boost to organized labor with the National Labor Relations Act, better known as the Wagner Act of 1935. The standard textbook takes for granted that what is good for unions is good for workers (even though the whole purpose of a modern union is to exclude people from a trade in order to raise the wages of union workers). The facts say otherwise.

The ways in which labor unions changed society are legion, from effects on the labor market to work rules that some say discourage efficiency and innovation. In a study published jointly in late 2002 by the National Legal and Policy Center and the John M. Olin Institute for Employment Practice and Policy, economists Richard Vedder and Lowell Gallaway of Ohio University calculated that labor unions have cost the American economy a whopping $50 trillion over the past fifty years alone.

“The deadweight economic losses are not one-shot impacts on the economy,” the study explains. “What our simulations reveal is the powerful effect of the compounding over more than half a century of what appears at first to be small annual effects.” Not surprisingly, the study did find that unionized labor earned wages 15 percent higher than those of their nonunion counterparts, but it also found that wages, in general, suffered dramatically as a result of an economy that is 30 to 40 percent smaller than it would have been in the absence of labor unions.

Labor historians and activists would be at a loss to explain why, at a time when unionism was numerically negligible (a whopping 3 percent of the American labor force was unionized by 1900), real wages in manufacturing climbed an incredible 50 percent in the United States from 1860–1890, and another 37 percent from 1890–1914, or why American workers were so much better off than their much more heavily unionized counterparts in Europe. Most of them seem to cope with these facts by neglecting to mention them at all.