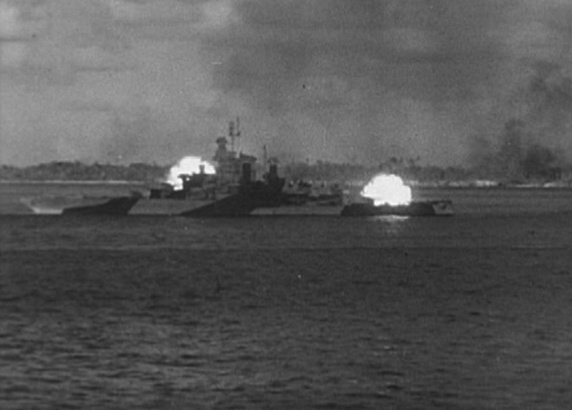 The following article on naval artillery is an excerpt from Barrett Tillman’ D-Day Encyclopedia. It is available for order now from Amazon and Barnes & Noble.

Naval artillery has been a primary feature of naval power since cannons were mounted to war vessels. But they were a critical component of Allied victory in World War Two, particularly at D-Day. This article will describe the naval artillery available to America on June 6, 1944.

The Germans kept their reserves well inland, away from the landing beaches and landing ships, having experienced Allied NGF in Sicily and Italy.

Because most gunfire support ships could not see their targets, indirect fire was required. Aerial observation was an important aspect of effective NGF, though weather conditions on 6 June tended to obscure targets. Both infantry and airborne forces had gunfire spotters down to the battalion level, and some naval officers jumped with the paratroopers to provide an organic spotter capability.

Some destroyers slid within a few hundred yards of their assigned beaches to support the army, and though communication problems frequently arose, the overall effect was largely beneficial. The chief of staff of the First Infantry Division later stated that the ‘‘Big Red One’’ would not have been able to move off Omaha Beach without effective naval gunfire.

Bombardment ships in the American sector were: Bombardment and gunfire support ships in the British and Canadian sectors were:

Most of the U.S. Navy destroyers off Normandy were Livermore (DD 429) class ships. Sixty-four were commissioned from 1940 to 1943; the nameship remembered a Connecticut captain of the Continental Navy. Originally mounting five five-inch .38 caliber guns and ten torpedo tubes, they were reduced to a more manageable four turrets and five tubes. They were rated at 1,630 tons standard displacement, 348 feet length, and thirty-six-foot beam.

Twelve destroyers were converted to destroyer (i.e., high-speed) minesweepers (DMS) in early 1944 with all tubes and one five-inch turret removed, yielding the new Ellyson class.

This article on naval artillery is from the book D-Day Encyclopedia, © 2014 by Barrett Tillman. Please use this data for any reference citations. To order this book, please visit its online sales page at Amazon or Barnes & Noble.