Ratification of the Constitution 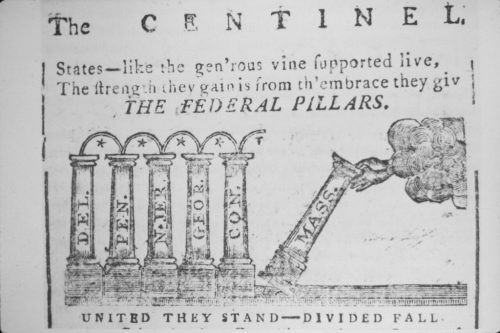 This article summarizes the ratification of the Constitution.

When several individuals began calling for a stronger central government in 1787, John Carroll jumped on board. He was elected as a delegate to the Philadelphia Convention but refused to attend because he wanted to keep an eye on the government in Maryland and ensure that the more democratic faction did not hijack the state. Though not elected to the state ratification convention, Carroll supported the Constitution because he believed it was the perfect mix of “the energy of monarchy, the wisdom of aristocracy with the integrity, common interest, & spirit of a democracy.” Carroll, however, recognized that the government, even under the Constitution, was a “confederated Republic” and he remained in his Maryland Senate seat long after he retired from the federal government. Maryland was more of his country than the United States. After the adoption of the Constitution, Carroll was sent to the first United States Senate by the Maryland legislature.

Ratification of the Constitution

Though Carroll was the wealthiest man in the Union when he took his seat in the Senate, and was of aristocratic lineage himself, he opposed titles of nobility. He also opposed congressional salary increases and secret voting. He believed an elected seat was a duty rather than a station and feared the effect excessive compensation might have on the future of the government. If men could enrich themselves as public officials, what would stop the possibility of corruption? Carroll eventually supported efforts to centralize the banking and finance system and served on the Senate committee charged with hammering out the Bill of Rights. His activities in the Senate can be characterized as mildly Federalist. Carroll resigned his seat in 1792 in order to return to his business and plantation affairs. Interestingly, Alexander Hamilton considered him a leading candidate for president if Washington had chosen to retire in 1792. Carroll was unaware of Hamilton’s design, but his conservatism and statesman-ship were well-admired traits among his compeers.

When the Constitutional Convention wrapped up its work in September 1787, Clinton published a series of letters in the New York press under the name “Cato” challenging the proposed Constitution. He criticized it for consolidating the states into one general government which could not, in his estimation, protect the lives, liberty, and property of the people. In his third essay, Clinton wrote:

The strongest principle of union resides within our domestic walls. The ties of the parent exceed that of any other. As we depart from home, the next general principle of union is amongst citizens of the same state, where acquaintance, habits, and fortunes, nourish affection, and attachment. Enlarge the circle still further, and, as citizens of different states, though we acknowledge the same national denomination, we lose in the ties of acquaintance, habits, and fortunes, and thus by degrees we lessen in our attachments, till, at length, we no more than acknowledge a sameness of species. Is it, therefore, from certainty like this, reasonable to believe, that inhabitants of Georgia, or New Hampshire, will have the same obligations towards you as your own, and preside over your lives, liberties, and property, with the same care and attachment? Intuitive reason answers in the negative.

Clinton, as governor, made a strategic error. He hoped to defeat the Constitution but feared he might not have the votes at a state convention, so he delayed calling one. If, however, he had used his enormous influence to defeat the Constitution in New York before Virginia and Massachusetts made their votes, he might have swayed those states to join the Anti-Federalist camp.