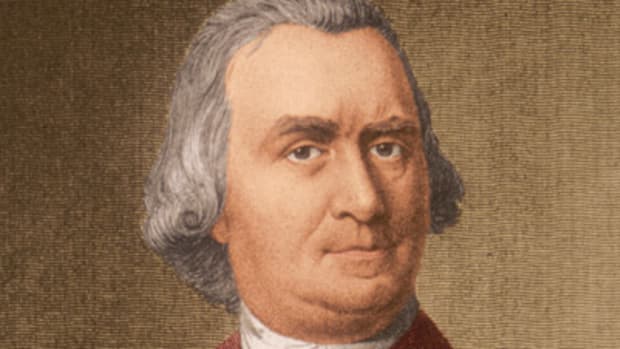 Roger Sherman was appointed New Haven County surveyor in 1745, a position that led to considerable wealth and substantial landholdings. Sherman served in a variety of political and civic positions in New Milford, including juryman, town clerk, clerk of the church, deacon, school committee-man, and as town agent to the Connecticut Assembly. He owned the town’s first store and published a series of almanacs between 1750 and1761 that illustrated his depth of knowledge in mathematics and his propensity for wit and wisdom. He was admitted to the bar in 1754 and was elected to the General Assembly in 1755. Sherman was appointed a justice of the peace and justice of the county court and was returned to the legislature every year except two between 1755 and 1761.

He moved to New Haven in 1761 and became involved with Yale College, first as a merchant selling supplies to the students, then as a contributor to the construction of the college chapel, and finally as the treasurer of the school. Yale awarded him an honorary Master of Arts degree in 1768. Newhaven sent him to the upper house of the legislature in 1766, where he served until 1785, and he was made a judge of the superior court of Connecticut in 1766, a position he held until 1789. Sherman wrote in his almanac, “Every free-man shou’d promote the public good.” The people of New Haven County deemed him an able steward of the public good for most of his life, and his service to his state was exemplary, but the Revolution would mark his career and make him a well-known public figure in all the states.