The Berlin Wall And Günter Schabowski 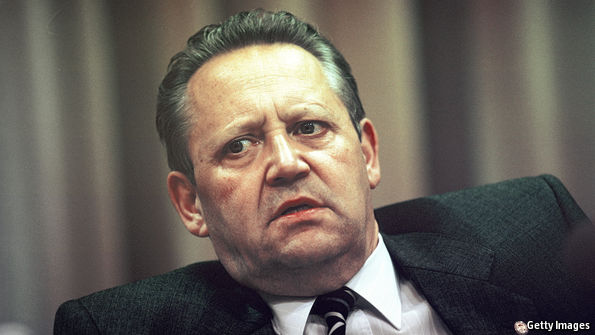 There are very few moments where one individual caused a singular, significant moment in history. When it comes to the fall of the Berlin Wall, no one person can take credit for its end. The collapse of the Berlin Wall on November 9, 1989 sent shock waves throughout the world and became the symbolic end of the Cold War era. To say a few individuals caused one of the most critical moments in modern history is hyperbole. However, on that fateful night, two East Berliners named Günter Schabowski, the Berline Communist Party chief, and Harald Jäger, a lieutenant-colonel working at the Bornholmer Street border crossing, forever enshrined themselves in history as two notable figures who inadvertently aided in the fall of the Berlin Wall.

The once impenetrable Iron Curtain, the political boundary that divided the communist East and the democratic West, was crumbling. Under the non-interventionist leadership of Soviet General Secretary Mikhail Gorbachev, nations of the Warsaw Pact were finally free to determine what form of government would govern them without the threat of a retaliatory response by the USSR. The fall of communism in Eastern Europe began in Poland in the summer of 1989 and was quickly followed by Hungary.

In East Germany, the quick collapse of communism in Hungary caused shockwaves. For those eager Germans trying to flee communism, the East German-Hungarian border became a highway for those wanting to escape communist rule. After a reformed border was opened, approximately 30,000 East Germans fled to Hungary with intentions to immigrate to West Germany via Hungary or Austria by the end of September. East German politicians had become wise to their fleeing populace and quickly shut off all travel between them and Hungary.

Though the initial problem was solved, many politicians within the East German Communist Party, or SED, understood fully that Gorbachev and the USSR were unwilling to send military assistance to curb anti-communist demonstrations throughout the Eastern bloc. East Berlin Party boss Günter Schabowski remarked, “When the Hungarians opened the border, it was especially important because the socialist bloc as a whole took no part in the decision.” He echoed many East German communist fears, and Gorbachev’s decision confirmed to many that the end of communist rule was near. The lack of Soviet intervention against pro-democratic protests proved “that we could not rely 100 percent on Moscow. The opening of the [Hungarian] border was the beginning of the end of the socialist bloc… Some people in the GDR [East Germany], myself included, thought that the GDR was not safe, because Moscow was no longer protecting it and who else could guarantee its existence?”

The Man Who Said to Open the Wall: Günter Schabowski

Günter Schabowski came of age during the early years of the Cold War. Studying journalism at Karl Marx University in Leipzig, Schabowski rose through the ranks of the East German media world before becoming the chief editor of the leading Communist Party-controlled newspaper Neues Deutschland in 1978. He used this role to propel his political ambitions. By the mid-1980s, Schabowski was a member of the SED Politburo and became the First Secretary of the East Berlin chapter of the East German Communist Party.

Schabowski’s power in East German politics continued to grow against the grain of communism’s overall waning influence in Eastern Europe. By October 1989, Schabowski was the Communist Party chief of East Berlin and one of the city’s most prominent voices. He was a “cheerful, ebullient figure” who supported liberal reforms even though he was a staunch communist. However, Schabowski’s rise and support by many around him could not stop the anti-communist wave on the verge of overtaking East Berlin.

Matching Gorbachev’s policy of glasnost, the SED had begun holding daily press conferences with members of the free press. As he had been doing for nearly three weeks, Schabowski prepared for another press conference on November 9, 1989. Schabowski was a quick-witted, confident, and reliable figure the SED wanted to put in front of reporters. However, the usually prepared party chief was not a part of an earlier meeting about newly updated travel regulations between East and West Berlin. The new travel regulations included that “Permanent exits are possible via all [East German] border crossings to [West Germany] and (West) Berlin.” Schabowski was given a copy of the new regulations known to the press, but the party chief did not thoroughly read the document. “I took it along,” Schabowski recalled, “skimmed through it again during the drive to the press conference and put it away amidst my other papers.”

Arriving at Berlin’s International Press on Mohrenstrasse shortly before six o’clock in the evening, Schabowski was exhausted and felt the tension in the room. While he had done these kinds of pressers before, this conference had many Western journalists and television cameras. For most of the press conference, Schabowski spoke about humdrum changes in the government and other matters such as administrative reform. After nearly an hour, Schabowski began casually reading the new travel regulations that made “it possible for every citizen of the GDR to leave the country using border crossing points of the GDR.” Journalists began asking if Schabowski could clarify his statement. The Berlin Party boss quickly became confused and looked for assistance from his colleagues to no avail. Flustered, Schabowski declared, “we have decided today to implement a regulation that allows every citizen of the German Democratic Republic to leave the GDR through any of the border crossings.” Instead of squashing concerns, multiple journalists leaped on the dangling statement by asking, “When does that [regulation] go into effect?” and if anyone could travel to West Germany “Without a passport?” Stuck by his own words, Schabowski began reciting the document for travel regulations before capitulating and admitting, “I cannot answer the question about passports at this point. That is also a technical question. I don’t know, the passports have (pause) so that everyone has a passport, they first have to be distributed.” Once again, reporters did not let Schabowski off the leash. It is believed that American journalist Tom Brokaw asked the critical question: “When does it come into effect?” Sweating, Schabowski began frantically looking for an answer in his notes before announcing, “That comes into effect, according to my information, immediately, without delay.”

Happy to leave the press conference area shortly after 7:00, Schabowski agreed to a live interview with Tom Brokaw immediately after the live press conference ended. Brokaw wanted Schabowski to clarify his comments and asked if East Berliners “no longer have to go through a third country” to get to West Germany and “Is it possible for [East Berliners] to go through the Wall at some point?” Schabowski answered Brokaw directly. “It is possible for them to go through the border. It is not a question of tourism. It is permission to leave the GDR.” The frankness of Schabowski’s answer was shocking. In less than an hour, Schabowski had conferred the dreams of Berliners who wanted to unite the city since the wall’s construction in 1961. When he had a moment to breathe, Schabowski tried to call Gorbachev and the Soviet Union’s Minister of Foreign Affairs Eduard Shevardnadze to discuss his comments and the future of Berlin. He was told that both men were too busy to speak with him. After 28 years, Schabowski’s press conference blunder would lead to the end of the Berlin Wall.

The Man Who Let Them Through: Harald Jäger

Lieutenant-Colonel Harald Jäger enjoyed a successful career as a border guard commander whose duties included overseeing passport control at Bornholmer Street. A lifelong communist who served in the army, Jäger believed the Berlin Wall served a purpose as a “rampart against fascism,” noting, “When it went up on the 13th of August 1961, I cheered.” Jäger was on border patrol duty but did not initially hear Schabowski’s press conference. When he did hear of Schabowski’s comments on the television in the workplace cafeteria, he nearly choked on the dinner he was eating and shouted, “What sort of diarrhea is the man talking?!” A handful of people showed up on Bornholmer Street immediately after Schabowski’s press conference. Soon enough, upwards of 10,000 East Berliners came to Jäger’s gate demanding to be let through since “Schabowski said we can.” After calling his superiors for advice on how to quall the situation, Jäger responded to the growing crowd exclaiming “that it was not possible [to leave East Berlin] because according to our regulations they needed a passport and a visa, without which they couldn’t go. I told them to come back the following day and a few went away.” While the explanation caused some to leave, the vast majority stayed and shouted, “Open the gate, open the gate. The Wall must go.”

Jäger was given further orders to seek out the “more aggressive” protestors at the wall, take a picture of them, note their credentials, and let them through. East German officials wanted to trap them in West Germany, effectively stripping them of citizenship. Jäger began implementing the plan and, for good measure, let a few “non-aggressive” protestors go through as well. By 9:30, between 250 and 300 people could cross from East Berlin into West Berlin. However, thousands of protesters became aggravated that a select few people could pass through into West Germany. Tensions were growing exponentially, and people continued to come to the Bornholmer Street checkpoint.

By 10:30, more than 20,000 people surrounded Jäger’s post. Jäger continued to call his superiors for orders, but many told him to sit and wait. One official, Colonel Ziegenhorn, even called the mass gathering nothing more than “nonsense.” “My boss told me in no uncertain terms that he had no more orders,” Jäger recalled. “I was practically left on my own.”

Jäger began fearing that the peaceful gathering could succumb to violence if no decisive actions were taken. The Lieutenant-Colonel who had dedicated his life to the communist system decided that things “were impossible and we could not go on as we had.” The indecision of Jäger’s superiors coinciding with his border guards “urging me to do something” led to a decision that would make history. Much to the disbelief of his officers that he had to repeat himself, at 11:30, Jäger ordered his “guards to set aside all the controls, raise the barrier and allow all East Berliners to travel through.” “It took them an instant to come to terms with it,” Jäger admitted. “They didn’t resist but they hesitated because they knew what was happening here wasn’t allowed to happen and they knew what was happening here was irreversible.” Jäger opened the gates, and the Berlin Wall, the symbol of communist rule in Eastern Europe, was coming down.

Harald Jäger is still remembered as the man who opened the Berlin Wall. However, Jäger admitted that his order to open the wall would not have been given if it was not for Günter Schabowski’s press conference. The Lieutenant-Colonel did not celebrate the wall’s fall like so many of his compatriots who wept with joy. He instead cried tears of relief that the standoff had ended without bloodshed, followed by tears of frustration at the failures of the SED and the fall of the communist system in East Berlin. “My world was collapsing and I felt like I was left alone by my party and my military commanders. I was on the one hand hugely disappointed but also relieved that it ended peacefully.” However, it was not the words of Günter Schabowski or the actions of Harald Jäger that truly caused the Berlin Wall to fall. Jäger summed up the fall of the Berlin Wall perfectly when he said it was not him that caused the wall to collapse. Instead, “It was that crowd in front of my checkpoint. The situation was explosive. That made me do it.”

For the “Eyewitness History” podcast of Hope Harrison’s oral testimony about being in Berlin after the fall of the was see below!