The First Amendment to the Constitution

History » Revolution and Colonies » The First Amendment to the Constitution 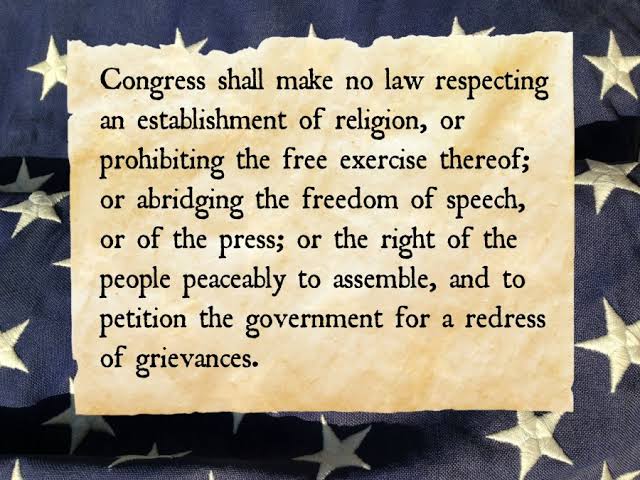 The First Amendment to the Constitution

Congress shall make no law respecting an establishment of religion, or prohibiting the free exercise thereof; or abridging the freedom of speech, or of the press; or the right of the people peaceably to assemble, and to petition the Government for a redress of grievances.

The First Amendment to the Constitution was a restriction on the power of the federal government, not a grant of power. It prevented the federal government from establishing a national religion, but it did not grant power to that government to interfere in the church-state relations decided upon by the states. The amendment clearly says that “Congress shall make no law” pertaining to religion, not that Massachusetts, Georgia, or Pennsylvania shall make no law. When the states authorized the use of public funds to support various churches, no one in the early republic considered it a violation of the First Amendment, which was universally understood not to apply to the states.

The First Amendment to the Constitution also did not allow federal interference in state questions involving speech and press. The good sense of the people of the states and their right to self-government had to be respected. As Jefferson wrote to Abigail Adams in 1804, “While we deny that Congress has a right to control the freedom of the press, we have ever asserted the right of the States, and their exclusive right to do so.”

Even with the added complication of the Fourteenth Amendment in 1868, which gave the federal government more power over the states, the Jeffersonian edifice still stood, if in somewhat attenuated form. In the early twentieth century, issues of church-state relations arose in the supreme courts of Georgia, Illinois, Minnesota, North and South Dakota, and Texas, and in each case, when the court mentioned the federal Constitution at all it was to deny that the federal government had any role to play in church-state issues at the state level.

In the late 1870s, Congressman James G. Blaine introduced what became known as the Blaine Amendment, by which the First Amendment’s restrictions on the federal government would be extended to the states. Introduced again and again in subsequent sessions of Congress, it never garnered enough votes. But the very fact that it was introduced tells us something important. If the Fourteenth Amendment had really been intended to apply First Amendment restrictions to the states, why would the Blaine Amendment, which sought to do the very same thing, have been introduced in the first place?

But less than a century later, the Supreme Court would declare in Engel v. V itale (1962) that local school boards were prohibited from approving even nonsectarian prayers for use in schools. Americans have been raised to believe this decision to be an expression of such sublime wisdom that they would be surprised to learn that it runs exactly contrary to the Framers’ intent. Not only Jefferson but the entire founding generation as well would have considered such a ruling to be a stupefying departure from traditional American principles and an intolerable encroachment on communities’ rights to self-government.

If the Framers of The First Amendment to the Constitution considered it legitimate for Massachusetts and other states to use tax money to support churches, it would be difficult to argue that it was meant to prohibit school prayer or the hanging of the Ten Commandments. But this is what television commentators routinely claim, and hardly anyone ever contradicts them.