The Missouri Compromise of 1820 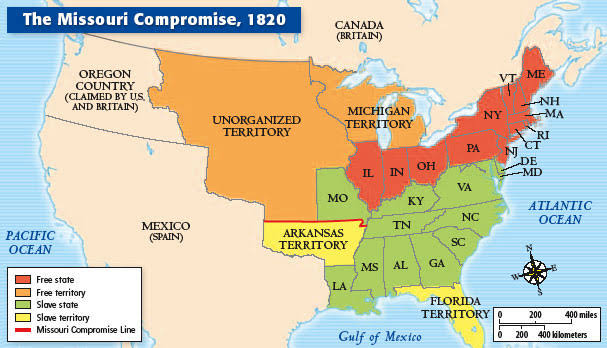 The Missouri Compromise of 1820 was the legislation that provided for the admission of Maine to the United States as a free state along with Missouri as a slave state, thus maintaining the balance of power between North and South in the United States Senate.

The Missouri Compromise of 1820

The debate that began in 1818 over the admission of Missouri, a slave state, was a critical juncture in the young nation’s formation. At the time, there were equal numbers of slave and free states—eleven each—resulting in a kind of balance of power in the Senate. But the admission of Missouri would have given the South an edge in the Senate. The stalemate was finally broken in 1820 by the Missouri Compromise: Missouri was admitted as a slave state and Maine a free state.

Of much greater significance was a provision of the Compromise that pertained to the status of slavery in the Louisiana Territory. With the exception of Missouri, any territory north of 36°30′ (the southern border of Missouri) would be forever closed to slavery, while in any territory south slavery would be permitted. Awkward as it was, the compromise prevented similar crises in the future, and remained in effect for more than three decades.